Your Art Lesson For The Day 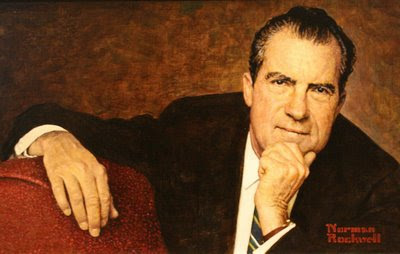 I don't care much for the subject, though. Nixon was the first "utter rotter president" in my lifetime. And while you can pick on the post-war prezzes - FDR and HST and Ike and JFK and particularly LBJ, but Nixon was the first obvious and complete disappointment, and rattled my faith in the Presidency and left me leery of politicians for the rest of my life. Secret bombings, secret tapings, secret deals, dirty tricks, and every so often some old tapes resurface that remind us of how embarrassing he was. Plus the fact that he was anti-charismatic, a political cartoonist's dream, with continual five o'clock shadow, pinched features, beady eyes, trademark nose, and a feeling of flop sweat.

None of that is visible in this portrait, by Norman Rockwell and hanging in the National Portrait Gallery. Instead we see a relaxed man comfortable in his own skin. His sallow features are more natural, and his eyes wide, alert, and intelligent. I've seen cropped versions of the painting which just have the headshot, which is insufficient - the left-hand-to-the-chin by itself doesn't work without the relaxed right hand draped casually over the top of the couch. The empty area (negative space for those who pay attention to those things) in the upper left creates a dynamic feel for a sitting subject, and a relaxed intimacy that the man never projected in life.

And that is the power of art.

Norman Rockwell is best known for his commercial work, primarily covers for the Saturday Evening Post, and his whimsical themes and homespun Americana. Yet I've always thought he should be presented in the museums as a truly American painter with his own strengths and power. This portrait just confirms those feelings for me, and we should see more of his work in the great American art collections.