My Year in Books: Worlds of Iff

[This year, I was curious about what I was reading, so when I finished a book I put it on an ever-growing pile by my desk. Here's another collection of short stories. These are pretty obscure, and would be even more obscure if not for the author] 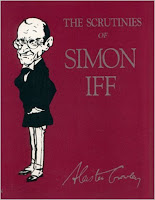 The Scrutinies of Simon Iff by Aleister Crowley, Teitan Press,  1987
Provenance: John Rateliff's downstairs bathroom. No, really. John tends to keep a wide variety of interesting books in his downstairs bath, and this was originally found there, on loan from a library. After the first few pages, I found most of the stories on-line and finished it that way. Not surprisingly, it is the only on-line, non-RPG "book" that I completed this year.

Aleister Crowley is totemic figure in RPGs and fringe culture. Occultist, founder of the Order of the Golden Dawn, poet, drug addict, mountaineer, magician. He called himself "The Beast" (long before Marshawn Lynch scooped up the title). The papers called him "The Wickedest Man in the World". And he also wrote a series of short stories featuring his philosopher/mage detective, Simon Iff.

These stories were written in 1916-1917, when Crowley was down in the financial dumps and living in New Orleans (because the position of "Wickedest Man in the World" doesn't pay nearly enough, even with the Great War going on). They were published in The International, which was little more than a fanzine published by Crowley with much of the writing being done by Crowley under a variety of pen names (the Simon Iff stories were by Edward Kelly, a hark-back to the British mage, but he soon just dropped that).

Let me be honest: You can live without these. Crowley solves his mysteries through application of his philosophy, which is murky at best as explained by the stories. Crowley's age and appearance seems vary in the older stories, as does his influence and reach (at one point he has a British super-secret destroyer at his disposal). These are generally forgettable, with one notable exception.

In "A Sense of Incongruity", Iff heads into the American South (for no real reason as far as the plot is concerned) and witnesses a lynching. The detail and horror with which he describes the scene is not that of a writer, but as a reporter. You have no doubt Crowley was present at such a lynching, and, much like the protagonist of Lovecraft's story "Pickman's Model" you realize that the creator is drawing from life.