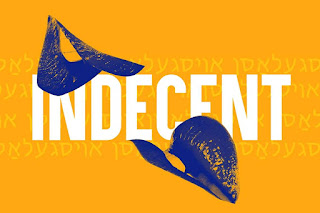 The question comes up (and yes, it comes up) - why do you write so much about plays? I mean, you (meaning me, Jeff Grubb) are a game designer and an author. Yet your blog is filled with reviews of local productions, along with local politics and stuff about collectable quarters. What gives?

Well, the big reason is that plays have a shelf life, unlike books or games or movies. I can talk about those weeks (if not years) after they have been released, and they will not have much effect. If I speak lovingly about a book, its not as if that book is gone if you have any interest in it.

Plays, though, are live, and they have a timer on it. Wait too long and they will have moved on. They are perishable. They have a "best buy" date. This applies to politics as well - after a certain point, no manner of commendation or warning will have much of an effect (Collectable quarters have this as well to a lesser degree - I need to write up one year's before the next year shows up).

Just wanted to share that. When/If I get more time, you may see more gaming stuff. But it is an uphill fight right now.

The Rep leads off its season with a powerful, moving, amazing production of Paula Vogel's Indecent. This was down at Ashland, but we put it off because we knew it was going to be at the Rep (with a different cast and diractior) later in the year. A pity - I would have wanted to compare the performances.

The play is about the Jewish playwright Sholem Asch and his play, God of Vengeance. Written originally in Yiddish, the play was moving and important and offensive all at once. God of Vengeance is about a Jewish brothel owner whose daughter falls in love with one of the prostitutes. Their house is literally built on the backs of the women who work in the basement. The father commissions a Torah for the house for the respectability it brings and to gain a good husband for his daughter, who rejects him and his life. The play was scandalous, particularly among the Jewish community, for its negative portrayal of its Jewish characters (why give Anti-Semites any more ammunition?), as well as the desecration of the Torah (the father casts it away at the play's conclusion) and the open lesbian love scenes between the two women. Asch felt it was honest - many of his colleagues, as well as the religious community, considered it indecent and recommended he burn it.

Indecent's main character is Lemmi (Bradford Farwell), who is a tailor from the countryside who attends the first salon reading of the play, and is thunderstruck by its brilliance. He becomes Asch's stage manager on the production as it is a success across Europe. Then they come to America where the wheels come off. the production. The English translation of the  play does well in the Village, but when it moves uptown to the Apollo, it runs afoul of the forces of decency. Fueled in part by anti-Semitism (though the main witness against the play is a rabbi), the entire company is found guilty of obscenity. They return to Europe to continue producing the play and are swallowed eventually by the Holocaust.

And it is brilliant, incredibly well-written, well-produced, and well-acted. The actors literally rise from the ashes in the opening moments to tell the stories. Lemmi is our touchstone, but most of the cast take on multiple roles - Antoine Yared and Andi Alhadeff for the young insgenues,  Cheyenne Casebeir and Nathaniel Tenenbaum for the middle-ages parts, and Ron Orbach and Julie Briskman as the elders (in their wisdom and their folly). And they are all brilliant. Casebeir and Briskman are long-time members of various Rep productions, but mostly comedies, and they get in their dramatic chops in here. Nathaneil Tenebaum is particularly sparkling in all his roles, but they are a strong company, and sell the idea of both Lemmi's story and convince us they are a coherent company of supportive actors.

And let me mention the musicians, because what would a Yiddish play be without musicians? Alexander Sovronsky on the Violin, Kate Olson of the Clarinet, and Jamie Machler on the accordion. They come in for small roles as well, but their music keeps the entire proceedings moving along and creating the time of the play, from the turn of the century to up to 1950s. The music is incredibly well-integrated.

And the pacing - this is a bustling play, the characters almost always in motion, which calls out the quiet moments and strengthens them. There is continual activity as the company is moving props, changing wardrobe, and catching the flavor of a small theater group where everyone does everything.

Let me go onto the stagecraft itself, which sometimes overwhelms the productions, or creates a desolate landscape that the actors cannot fill. Not so, here. The use of titles projected on the proscenium and elsewhere contributes to the sense of motion to the play, as well as giving us visual clues as the cast moves between Yiddish and other languages (in Yiddish, they have no accents).

I tend to be suspicious about plays about plays - they feel a bit too inside the beltway, too much of an in-joke. Playwrights like to write them, actors like to be in them, audiences want to come to the theater to see people working behind the scenes of the show. Many of these are comedies. But few hit the nail so directly on the head as Indecent. This is a high initial bar, and I am very, very impressed by the production.