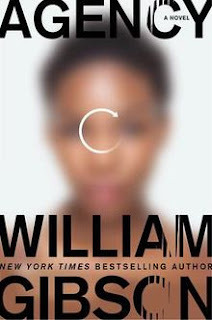 Provenance: This is a book I was looking forward to, and when I found myself in New York City for a recording session, took the A train down to the Strand in the Village to pick up a copy. And they had none (though they would be happy to order one, their initial shipment having sold out). I picked up a collected pair of Nero Wolfe books I had been missing (so it wasn't a total loss), and the next day picked up the sole copy left on the shelf at a local Barnes and Noble, confidant that I had the last copy available south of 37th Street. Now, I don't expect bookstores to warehouse EVERYTHING, but it a good clue that they under-ordered this particular book, sending people to the on-line sales outposts.

Review: This is a Bill Gibson novel, and has the hallmarks of previous Bill Gibson novels. Powerful AI? Check. Criminal mob operating in the background? Check. A lot of running around by the protagonist? Check. Cool use of tech? Cool use of tech assumed as normal and therefore not explained? Check. So put this one down as comfort food - you know what you are getting.

But what this book does well is in the "William Gibson Phone Call", which is a phrase I conjured for that last chapter, where someone, somewhere, calls in and explains what was going on while your protagonists, with their limited viewpoints, were busy in the novel itself. It is here, but slightly subverted, in that it literally happens with a phone call under a table, but you are actually well-prepared for it. It becomes a summing up as opposed to a surprise. That worked.

But let me give you a quick summary. Verity James (an "app-listener" - it IS explained) is given a new product to playtest. Said project is Eunice, an AI that attains consciousness frightening fast, creates packets (like in the internet) that are going around doing things, allowing her to multitask. The company that gave Eunice to Verity realizes they have uncorked a genie and try to stuff it back in the bottle. Verity goes on the run, helped by an ad hoc team of makers, millionaires, and agents from an alternate Earth.

Right. Alternate Earth. This is the sequel to Periphery, set in the same meta-universe with some of the same characters. Verity's Earth is, well, not quite an alternate timeline, but a "stub" created of the main timeline from about 150 years after the setting in 2018. The main stub sounds like our timeline, but because of earlier meddling, Verity's has some differences - Clinton won in 2016, the Brexit vote failed, and Notre Dame did not catch fire. Probably Harambe the Gorilla is still alive. But everyone there is tense and freaked out anyway, because Verity's Earth is also heading for nuclear war. The gang from the first novel (both from the "future" stub and from a previous stub) help Verity and Eunice in their world.

And the repercussions of this set-up is still in the works. First off, no one we've met knows exactly the science behind the stubs - they may be Chinese, but maybe not. One character seems offers that it is a colonization effort to some degree (though physical objects don't move between stubs, information and telepresence does). And the more advanced main universe (defining itself as being the group that creates stubs, and no one else can, because reasons) is meddling with other universes - benevolently in the case of this particular bunch, less-so in other cases. I am still waiting for the payoff of this last one.

What I do get is a better handle of some of the other things going on. Gibson is very light on the expository dialogue ("Well, Bob, as you know..."), so you get everything in bits. The Mainline is set after "the jackpot", an extinction-level event that kills 80% of humanity and most of the other vertebrate life forms. Now, earlier SF was big on the sudden nuclear attack/killer snowstorm/pandemic that suddenly changes everything. The jackpot is just a series of catastrophes that wipes out large chunks of the population, but nothing delivering the killer blow. Given that we've had a pandemic, wildfires in Australia, the final Brexit the impeachment of a president and a cyclone hitting Iceland just since the beginning of the year, I tend to feel this jackpot is about right for the end of the world as we know it.

Because it is a slow apocalypse, unevenly distributed, the mainline universe gets a chance to develop tech to, if not fix everything (There is a big garbage patch in the Pacific, big cleaning airstacks dominate London), but to mitigate the damage somewhat. They have assembler and nanotech and AIs and a lot of bots (we wipe out 80% of the population, the lower working classes are filled with imitation humans of various degrees - because we get lonely). The true 1% (mostly criminal, mostly corrupt, often Russian) is still there as the klepts, sorta the secret masters of the surviving world, who are kept in general check to keep them from screwing everything up again.

As noted above, I was reading this book in NYC and on the plane ride home, alternating it with an Ellis Peters mystery set in the Middle Ages. The difference between the styles was a bit of a whipsaw - Gibson's sparse writing style (I finished many short chapters wondering "what have I learned here?") against Peters more opaque language of the assumed middle ages (going to the dictionary to look up psalter and brychan).  Yet both have their own rewards, and Gibson's very shortness telegraphs home his events.

Ultimately, I want some answers, and, these being Gibson books, I don't know if I'm ultimately going to get them. That's OK - we are along for the ride, and it's a pretty good ride.