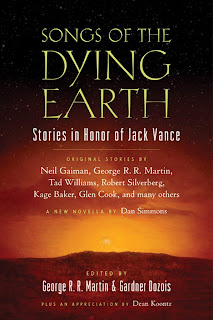 Song of the Dying Earth: Stories in Honor of Jack Vance, by a LOT of people you've heard about, edited by George RR Martin and Gardner Dozois, with Art by Paul Kidd. TOR Books, 2009

Provenance: Christmas present, probably 2009 as well. I came to Jack Vance late in life, which is a bit of a surprise given that D&D is hip-deep in Vancian notions, tropes, and outright, um, borrowings. But once I struck his Dying Earth series, in the form of a massive compendium, I was delightfully hooked by his mannered approach to far-future fantasy, and of course, when a massive tome by a cluster of big-name authors came out in his honor, I had to get it and consume it.

And I did, eventually. I remember burrowing into it at full steam, enjoying the stories a great deal. But that steam dissipated over time, and the book became a denizen of my Shelf of Abandoned Books. And only with the recent seclusion, where I have suddenly two more hours in my day that I had when I had to commute, did I finally return to it.

Review: So let me tell you what all the shouting is about. Jack Vance was an author who wrote from the 80's up to his passing in 2013. As a writer, he wrote a LOT of stuff, but the stories that have kept his memory warm in SF&F fans' hearts were his Dying Earth Stories. These were set in the far, far future, where our world is not only reduced to dust but totally forgotten about. It is a world where magic rules, other supposedly vat-created creatures roam the land, and the sun is on its last legs. The stories are stylistically marvelous, and present a Wodehousian future of manners, where wizards are so powerful that they are effectively useless (because there is always a counter-spell and a counter-counter-spell, and so on), and conman get by with the skin of their teeth. Irony abounds and no good deed goes unpunished. If you haven't read Vance, or Dying Earth, go dig it up.

Songs of the Dying Earth is a collection by later-day fans who have made good in the SF bidness, gathered under one roof. A lot of those are names to conjure with - Howard Waldrop, Bob Silverberg, GRR Martin, Tanith Lee, Neil Gaiman, Dan Simmons. A veritable pantheon of SF literati gathered between two covers to sing the praises of a talent who, if not forgotten, does not get remembered as much as he should.

So how do they do, these later-day student of Vance? They did really well. Some writers take characters from Vance's stories and weave new tales about them. Some take the flavor of the world and give us new tales. Some are paeans that closely follow Vance's voice and tropes. Some tell their own stories that are factually part of Vance's world, but are told with their own voices.  Matt Hughes, who wrote the Vance-evoking Majestrum, acquits himself nicely in Vance's sandbox. The longest piece, from Dan Simmons, is pure Vancian. GRR Martin's contribution is very GRR Martin, in that it is sufficiently creepy, but still belongs in the house of Vance. And the Tannath Lee piece, which is where I abandoned the book years ago, is on re-reading has that sense of irony that makes Vance to worthwhile as a writer.

The art, by Paul Kidd, is also pretty cool, particularly considering that in his stories, Vance never gave a great description of what deodand or a pelgrane looked like.

So why did I bail? Well, to be honest, it is a much of muchness. There is so much stuff in this book (670-some pages) that even the sparkling nature and wry humor of the Dying Earth starts to run thin. This is one of those books which should not be read cover-to-cover, but rather in sprints. Read three stories, then take a breather. Cogitate on them, maybe bake some Kaiser rolls. Then come back. That way it doesn't feel like one long vista of writing. But you should really consider checking it out.