Books on a Plane 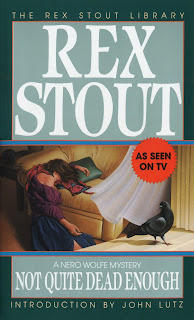 Provenance: Various. I pick up books from used bookstores - The Page Turner in Kent. The Tacoma Book Center near the Dome. Twice Sold Tales up on Capitol Hill. And I am always hunting down more of Rex Stout's stories of Nero Wolfe. The books were popular on first release, and there have been several waves of re-release since then (including reprints from the 80's marked "As Seen On TV").  Eventually I will run out of them. But not yet.

Reviews: When I travel, I tend to bring paperback mysteries to read. There are a couple reasons for this. They don't wear down batteries. They don't have to be turned off or stowed when taking off or landing. And if dropped or lost, they represent a lost investment of a couple dollars. About a month ago, I made two trips to Pittsburgh, and as a result took a fist-full of books with me.

So, warning, there are spoilers for books that have been in print for decades.

Three Witnesses - Rex Stout mysteries come in two main formats - book length, and magazine length. When published in book form, the publisher tends to put three of short stories together, and, unfortunately, they use the word "three" and its synonyms in the titles repeatedly (Three at Wolfe's Door, Three Doors to Death, Death Times Three), so I'm never quite sure if I have read this before. Usually I can get ahead of the game with the short stories and figure out "whodunnit", while the novels tend to lose me sometimes. This is in part because in the shortened format, both memory and awareness of what sticks out as wrong is more obvious in the short versions.

And, one of the things that makes Nero Wolfe mysteries work is the background. Archie will crack wise, Nero will be pompous. Inspector Kramer will bluster. The household will eat well. It is comfortable.

The mysteries in Three Witnesses are pretty good, but "To Die Like a Dog" is probably the best. A dog follows Archie home from a murder scene. While Wolfe is usually a bundle of hostility, it turns out he likes dogs. The dog's presence makes perfect. sense, and at the end, the dog has settled into the household. But as far I can tell, the dog is never seen again in another story, which is a pity.

Not Quite Dead Enough consists of two war year stories. In the first, Archie cobbles together a mystery to help recruit Wolfe into the War Effort. In the second, linked with that, an experimental grenade goes off in an military office downtown. The first is actually something I would call "lesser Wolfe", since Archie gets foxed and his oftimes girlfriend, Lilly Rowan, gets unusually possessive. The second sees Wolfe returning to a form not seen since Fer-De-Lance, the first Wolfe novel, where he metes out his own justice outside the system. Interesting for a completest like me.

Plot It Yourself involves the book industry, and the relationships between authors and publishers. Wolfe is hired by a group of publishers and authors who are being hit with a plagiarism scam. Not that other authors are stealing their work, but rather these other authors are coming forward claiming that the published authors stole their stuff. And they offer proof in the form of manuscripts and letters that show up in the published authors files from before publication. Its a good book in that it covers a variety of author types, and the perils of working for a committee.

And Be A Villain has a nice initial curve-ball - Nero Wolfe goes looking for a gig, in order to cover his tax bill (Wolfe has a long list of things he does not want to do, which the stories inevitably make him do). He  offers his services to a radio personality who has a guest poisoned on the air. Sudden death, relatively small number of suspects. Again, I got to my lead suspect not through evidence, but through character reactions to the crime. Further, the crime itself (and its followup) calls for a relatively thin window of opportunity, and can go horribly awry. I still like the writing in both cases, and the characters, but the mystery at the core feels a little weak.

This series has become my popcorn, my easy reading. The stuff I will take on a plane and not have any other greater purpose. There's one more, which I am still thinking about writing up. More later,