While I've Been Out

I've been away from the Home Office on Grubb Street for the past few weeks, first for the marriage of my eldest niece in Pittsburgh, and leaving there directly for Cologne, Germany and Gamescom.

My presence in Germany was to help launch the initial trailer for the upcoming Guild Wars 2 game (said trailer can be found here. (Go ahead, go play it. I'll wait.It's really good). We launched about noon local time on Thursday, followed by about fifty bajillion hours of interviews which featured the game trailer and Uncle Jeff's Story Time, a great party, several great dinners, and a long flight back to Seattle, which allowed me to watch Frost/Nixon.

But before I left on the flight, we did take a picture of the ArenaNet team in Germany. Here's our gang of unusual suspects: 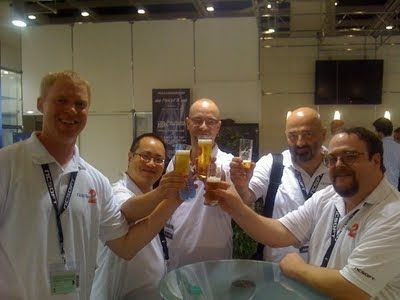 (L to R: Randy, Chris, Martin, Daniel, and your Humble Narrator. Note that Daniel and I started drinking before the toast).

Horribly exhausted, but satisfied, both by the work and by the beer. More later.
Posted by Jeff_Grubb at 4:30 PM