Plague Book: Kings of the Road 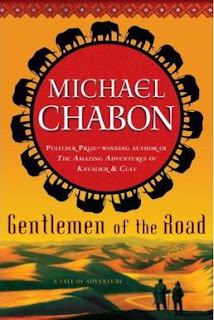 Gentlemen of the Road by Michael Chabon, Ballantine/Del Rey, 2007, art by Gary Gianni

Provenance: Elliot Bay Books, time undetermined but probably after their move from Pioneer Square up into the wilds of Capitol Hill. There is a sticker on the back, with ANOTHER sticker on top of it, with a severely reduced price, which indicates it may have been remaindered or overstocked.

Review: I like Chabon's work. I read Kavalier and Clay, listened to Yiddish Policeman's Union in audio on my commute, and the semi-biographical Moonglow (also audio, but unfinished since the trip ended and the CD was borrowed from a local library, and my normal vehicle could not play CDs). Yet this one was started, put aside for something else, then ended up on my Shelf of Abandoned Books.

In picking it back up, though, I had to start all over again. With a lot of my abandoned books, I can pick up at the exact moment of departure, suddenly flooded with the memories of what happened and who these characters were and what I was expecting next. For this one, I had to go back to the very beginning to recover my memories.

And I can see how I abandoned it, as well as how I tended to enjoy the author's work in audio form. Chabon's writing is ornate, verbose, layered, and intertwined deeply with itself. Read aloud, it follows. On the page a single sentence can take half a paragraph, and a chapter can leave the reader exhausted. So I started again.

The story is about two con-men adventurers in Central Asia in the mid-9th century. I know, it practically sells itself. Our con-men are Jewish from different traditions - Zelikman from the urbanized doctors and rabbis of Regensberg, Amram descended from the followers of the Queen of Sheba, she being converted by Solomon himself. Zelikman is depressed, intellectual, and has a fondness for his hats. Amram is calm, powerful, and wields an axe named "Defiler of Mothers". After a partially-successful con, they are saddled with a heir to the Khazar throne they are supposed to deliver AWAY from Atil, the capital of Khazar, where the rest of the royal family has been killed in a rebellion. Naturally, things being what they are, they end up at Atil, with the youth leading an army, to overthrow of the overthrowers.

Khazar is no fantasy kingdom. I knew about it from my own own random reading - a kingdom that according to legend chose Judaism as opposed to Islam or Christianity, keeping all its neighbors equally pleased and/or frustrated. Yet it is a hidden part of history, one not normally known, which makes the land and its peoples as fantastic and alien as any chunk of the Realms. Ditto the appearance of the Vikings - yes, they got into Russia (and gave that region its current name), and all the way down the Volga and into the palace of the Emperor of Byzantium as bodyguards, but that is not a known thing as well. Pulling from history and expanding it is great.

The book itself was apparently written serially for The New York Times, and you can see it in the construction of the story. You don't see a journey, you see an arrival. You don't see a battle, you see an aftermath. As individual chapters, it works well, but pulled together, it feels a bit choppy, and the reader is always catching up. So this is a chapter-a-night sort of read as opposed to a barrel through the entire text sort of book.

The writing itself is superlative. I mention the long, ornate sentences, but they engage the readers and hold them in place until the final paragraph break. Gentlemen plays with genre tropes without fully embracing genre, rather presenting an adventure story in a different light, deeper in the character than the serialized adventure tales of old, but still hewing to the ideals of a historical tale, told from a non-standard viewpoint.

Though the book is dedicated to Michael Moorcock, the vibe of the character interaction is much more Fafhrd and Grey Mouser. Amram is more dour that Fafhrd, and has more of a dark history. Zelikman is very urbane and urbanized, close kin to Grey Mouser. Fritz Leiber and Micheal Moorcock occupied the more literate end of the adventure fantasy genre, and Chabon evokes both of their natures in his work without spells, genies, and other such fantastical features. He keeps it relatively real for its place and time.

The text is interspersed with art by Gary Gianni, who for several years drew Prince Valiant. The fine penmanship evoked the work on Valiant, though does not always line up with the text it illustrates (characters are present in the art that are not in the scene being portrayed). Yet it is an excellent addition and helps set the tone and sell the story as a whole.

Is it a genre book? Fantasy? Historical? Adventure? Genre is a marketing term, in that it tells you where in the bookstore you should find a book or its kindred spirits. Gentlemen of the Road straddles the divide between popular and "literate" wings of the bookstore, and may have paid a price for it in not finding a wider audience. It is a worthy read, particularly if you have a diet of swords-without-sorcery adventure tales.