So, the Facebooks had one of those challenges 10 roleplaying games that have influenced my gaming. No explanations, no reviews.

Now you get my explanations.

I added the requirements for this list that these are games I have played, as a GM or a player, not games that I have only read, and not be games I designed (though they could be games I would later design for).

Dungeons & Dragons, of course, is my first. wood-grain box plus the Greyhawk Supplement, purchased at Vons bookstore in West Lafayette, Indiana. Got into roleplaying my first year at Purdue (I has done wargames before that). I cannot remember who my first DM was, but I was running a game by my second semester (that would be Spring of '76). The game itself is not playable out of the box - it is barely comprehensible out of the box, and required a lot of "tribal knowledge" to play, and table variants abounded. But it was the first, and informed everything that followed.

This image (and all images) is off the 'net. My woodgrain box was long-ago crushed through use and travel, and the booklets worn and coverless. The Lovely Bride has one in better condition, but it is one of the later white boxes.

Traveller is roleplaying Innnn Spaaaaace. It follows the presentation format of D&D - small box, three booklets. No illos, though a lot of tables. It was the first complete RPGs I bought and played, and, given the knowledge of what an RPG was from D&D, COULD be played out of the box. Yes, the legends are true, you could die in character creations (And we LIKED it), but the idea of your character having a history as opposed to bursting forth like Athena from the head of Zeus, fully-grown, was pretty neat. Also, the planetary code (numbers above 9 were given letters), and the world-hexgrid maps.

I still have my original books, but sold most of the supplements at the GENCON auction and then repurchased them later in big softbound editions. 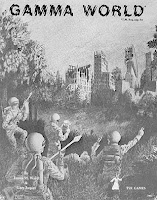 Gamma World was the first goofy game I bought and played. It can be played straight, but very much invokes post-holocaust silliness, in particular the hoops, which were bunnies that could turn metal to rubber. They would strike fear into the hearts of the dudes with power armor much like rust monsters would frighten warriors in plate mail. But the cool thing was the artifact table in the back, which was a decision tree that would end up in figuring what it was or blowing yourself up.

Now, I had a copy of Metamorphosis Alpha from earlier, but did not play it or run it (though I did loot it for D&D), so it does not get a note here, but them's the break. And yeah, I WROTE a later edition of GW, but this is one I played.

Empire of the Petal Throne was a wonder of its age. It was a complete RPG AND a incredibly detailed game world. The mechanics could be a bit of kludge sometimes, and it shares that :"Fallen World" nature of Gamma World, but its ornate back history, alien culture, and weird aliens in a unified setting we brilliant. A lot of what would become the Forgotten Realms grey box can find its roots here.  Plus,  percentile dice ability scores!

I played it in college, but did not own a copy (Because it cost, like 25 bucks, and who had that much money to toss around). Years later I got a reprint, and most recently, a version from The Tekumel Foundation, which I still read.

Call of Cthulhu came out after I left college, and my first experience was with fellow TSR Designer Dave "Zeb" Cook as the Keeper. Which meant there was a great admixture of humor and horror in his game. You can see the ancestry of D&D here in the roll three dice for most of your abilities, but the skill system was the first that I felt tailored to the world we were playing in (which was a good thing and a bad thing). And the sanity mechanic as an alternate mental hit point track.

This was the version I played way back when, and the basics stayed about the same for many, many editions. One version (5?)  had the best two-page spread to explain a player character sheet I ever saw. Later editions may have had some bloat, but I still play and enjoy it, and am running at team through some classic Masks of Nyarlthotep right now. 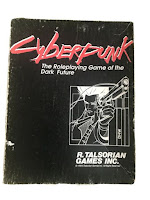 Cyberpunk is interesting, because I wanted to do it myself. TSR asked everyone for what they would do as a blue-sky project, and I suggested a dark dystopian cyberpunky universe, which was so toxic that it ate a hole through the bottom of the filing cabinet. The boss came back and said "What else you got"? I had this super-hero game I developed in college which became Marvel Super Heroes.

People compared Cyberpunk to Shadowrun, which was also of the time, but like Cyberpunk better. SR had its pluses, but you could create a character who was completely overpowered, but through the limitations ithad to take it cost could not leave the room for any missions..

I pulled out my box of Cyberpunk downstairs, only to discover that my original books were missing, and the box help only the 2020 edition. I remain struck with how stylish the early edition books were, right down to the Patrick Nagel-esque cover and clean page design. The 2020 version was a definite improvement, but this is the version I started with. 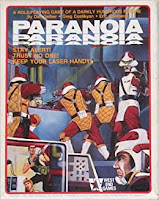 Ah, Paranoia. If Gamma World lent itself to be inadvertently silly in places, Paranoia worked for its laughs. Replaceable identical characters, mad computers, insane bureaucracy, and every debrief (and many briefings) ended up in a firefight. In addition, this early version had skill trees, which were a nice crunchy mechanic at the heart of all this bouncy-bubbly cola. I ran into Ken Ralston, the designer at convention, and told him I was running the game. His response was "Oh, YOU'RE the one!".

Here is a great place to shout out to the late James Holloway and his art. The regular sized box had three booklets, and each booklet had someone looking at screen showing a scene from the cover of one of the OTHER booklets. That captured the loony, authoritarian nature of the game right there.

Whispering Vault, run by game designer and poet Lester Smith. This was a tiny book he picked up at a convention, which set out to do one thing, and do it well. You are extra-dimensional entities charged with going into reality and cleaning up disruptions. You had a LOT of variance in what you could do (I was yellow sphere with a happy face and a mohawk, and my domain was San Francisco as drawn by Bob Crumb), but you faced the same ritual of challenges each time. That nature of ritual was part of the cool stuff for the game.

I picked up my own copy later in life at Wonder World, I think, in Burien. Others presented it in better formats, but the little ring-binder version was a treasure. 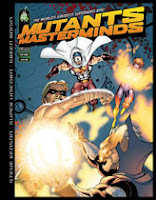 Mutant and Masterminds, because I can't talk about Marvel Super Heroes. I really liked this game for being the best example of Open Gaming License. Most OGL products fell really close to the D&D tree, but M&M worked hard to put itself apart. What it did, which I loved at the time, was to invert the level system. Instead of your character going up in levels, you set the level of your game and everyone designed heroes of that power level. Comic book heroes don't (usually) gain power like fighters in D&D, so this was a perfect solution that was true to the genre.

Pulled my old copy off the shelf, and found my character sheet still in there for the "Nihlist" (yes, it is typoed), an ethereal ghost-fighter with "Negato-Vision". Leafing through the rules, they have the complexity of the 3rd edition D&D era. If you want something simpler, look at Icons, but the same designer. 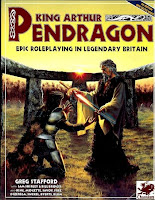 I was late to the gate on Pendragon, which is why this illo was of a later edition (yes, they have done two more since then). Loved the take on King Arthur. Like Whispering Vault it limited characters (you are playing a knight), and its field of view (Arthurian Britain). Played it with my current crew out here in Seattle and had a good time. One of the great mechanics was the seasonal progression of the years, rules-based sense of "down-time" during the winter months, running your own castles, and creating a genetic line to let you span a century of play.

And  one more, as a bonus; Blades in the Dark. This is a recent addition, run by a colleague at Relentless Studios. I really, really liked this, though I recognize that it is in the "new breed" of RPGs which give more authority to the players and as such reduce the amount of control the GM has. Its ability to retcon the past to to fit the caper nature of the game has been explored in other games, and forces both the GM and the players to pay attention all the time to what is going down. Want to run in it again, though I don't know if I can GM it - I am old dog set in my ways.

There are others, of course. Top Secret with its Fate Points, Metamorphosis Alpha with its contained world-is-a-dungeon, Dogs in the Vinyard, all the editions of D&D and AD&D and the various EPT reboots. Chivalry & Sorcery and Arduin. Villains & Vigilantes and Champions. Lace & Steel. Castle Falkenstein. Buck Rogers and Marvel Super Heroes. But these 11 are those that fit the requirements of being on the outside looking in, and finding good game design and interesting, playable worlds.

So, what are yours?