[Blogger's Note: I had this entry all written up with all manner of individual photos of the games, but the most recent incarnation of Blogger is a pig as far as layout is concerned, and in the process of formatting the dratted thing, I ended up deleting the entire text, and the blank file was immediately saved to the cloud and lost entirely. Blogspot has made its platform less usable. Thanks, guys.] 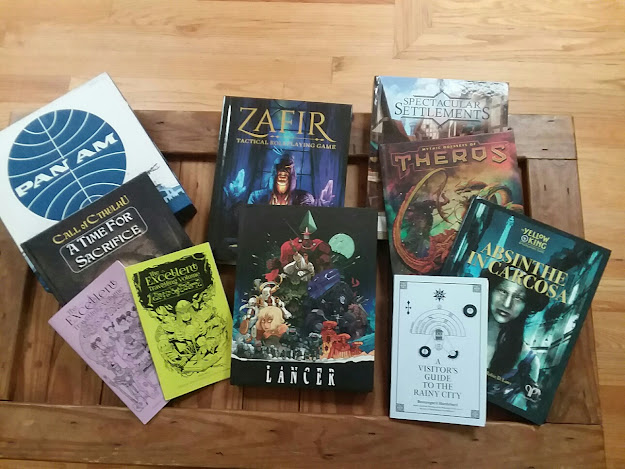 For someone who hasn't been going anywhere lately, I continue to accumulate gaming material. Part of this is from Kickstarters resolving, part of it purchased from t my local comic shop, Fantasium, thatis back in business, and from the occasional field trip elsewhere.

All of this that follows are not reviews per se - I believe you should actually play something before your review it. This is first-glance stuff, initial impressions, surface judgements, and I reserve the right to think otherwise after I dig into it. Your own mileage may vary. Here goes:

The Mythic Odysseys of Theros (WotC, purchased at the Fantasium) is a nice single-book world. Like the earlier Ravnica, Theros is based on a Magic The Gathering campaign, turning the MTG background world into the basis of an RPG campaign.The idea of combining MTG and D&D has been around since WotC bought TSR back in the 90s. and the campaign settings chosen have been relatively "small" worlds - Ravnica being an urban setting while Theros pulling heavily from Greek Myth, to the point of you recognizing the characters they are playing off of. I like the 5E approach of combining Players and DM info in a single book, though wonder if they are going to hit the same problem as 2E where we had way more campaigns than time to play them.

I actually warmed up to Spectacular Settlements (Nord Games, Kickstarter) as I dug into it. My first reaction was "Hey, there are a lot of tables here." as the heavy (450+ pages) book is filled with tables telling you how to fill out everything about settlements from trading posts to capitals. But where it excels is when it takes that data and creates playable baseline towns and cities for the DM to slot into their campaign.I liked it.

On the other hand, A Time for Sacrifice: (New Comet Games, Kickstarter) just ground my gears. A series of Call of Cthulhu adventures set in the Yucatan seems to be a perfect set-up - during the 1920s, the Mayan cities were the great lost civilizations, their statues enigmatic, their writing impenetrable. Sadly, the first adventure requires knowledge of written Mayan to solve some of its puzzles, and there is a pre-Columbian contact book in the local library, which can be read even through the Mayan written language was almost completely destroyed and only recently deciphered. That sort of thing just put me off a bit, and I don't know if I will get to the rest of it, or ever run it. Time for Sacrifice is not the only Cythulhu to get lost in the jungles of the Yucatan - Pagan's Mysteries of Mesoamerica has some similar pitfalls as well.

Absynthe in Carcossa (Pelegrane Press, purchased at Gabi's Olympic Cards and Comics down in Lacey) is an oddity. Created for The Yellow King Roleplaying Game, and descended from the Gumshoe system, the book itself is missing any game text, but rather is one of those game-adjacent projects the Pelgrane does every so often. It is a scrapbook of clippings from other sources to describe La Belle Epoque in Paris. Like any good mythos tome, you have to really dig into it to figure out what it is all about. I believe this won and ENNIE this year, which is nice, but I need to really read it.

Zafir (Zafir Press, Kickstarter).I kickstarted this one, but picked up my copy personally from the designer - he's local Seattle. It is a magitech-flavored fantasy RPG, which gives us access to ballistic vests and zeppelins, but where it shines is the level of detail in its combat. It is definitely a descendant of old wargames, addresses three-dimensional movement and combat head-on, and has a lot of D&D Fourth Edition's DNA in its rules. Leafing through it reminded me a playing 4E with Bill Slavicsek on Thursday nights way too many years ago.

Lancer (Massif Press, Kickstarter) has that same crunchy-bit rules approach as Zafir, but its bloodline comes more from Battletech (which is to say, managing the heat of your battlemech). It is a strongly anime-influenced game where you are a mech pilot in the far future. The humans have spread throughout the Orion Arm, and there are great peacefu lhuman civilizations at the heart of it all. For a lot of humanity, it is a golden age. You aren't there - you and your squad are in the outlands, the border kingdoms, the scrapyards where previous human expansions have petered out. The art is beautiful, and the mech designs are frankly wild. I look forward to digging into this one.

Pan Am (Funko Games, a Target exclusive, so I masked up and braved an actual chain store for it). A friend of mine raved about this board game, which if from the designers of the Waterdeep board game and sharing a lot of its mechanics. The idea is that you are running small airlines in the Golden Age of Air Travel (20s to 60s). You're gaining rights to air routes around the world, and then Pan Am will roll in and pay you big bucks for your work (which you then use to buy Pan Am stock). It has a lot of fiddly mechanics to it, and while the Lovely Bride and I enjoyed ourselves with it, a later four-person game with members of our plague pod turned into a long, painful slog. Maybe three players are the sweet spot.

A Visitor's Guide to the Rainy City (Superhero Necromancer, Kickstarter) is a gem. Part of a 'zine initiative in Kickstarter, it is a 60-page description of a half-sunken city at the end of the world. It is system agnostic, but the company's web site gives ideas of working it into the major game systems, include 5E and Blades in the Dark. Amusing in that it gives you a half-destroyed Hogwarts infested with pirates. Good world-building. Good stuff.

The Excellent Traveling Volume Issues 11 and 12 are simply great I am an avowed Petal-head, a fan of Tekumel and the Empire of the Petal Throne RPG. James Maliszewski has, after a long hiatus, returned to both these fanzines and his Grognardia blog to create wonderful stuff. If you are a fan, you should really take these books in. And his blog. Consider this one a review.

That's it. I made more comments on all of these originally, but they are lost to the ether. Let's see if I can keep this version alive long enough to publish.