The Excellent Traveling Volume  A Fanzine of M.A.R.Barker's World of Tekumel 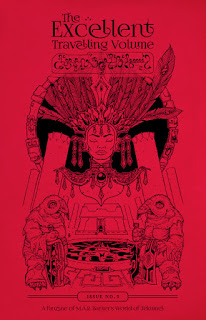 It should not be a surprise to readers of this blog that I am a big fan of M.A.R. Barker's Tekumel and its first public incarnation, the Empire of the Petal Throne boxed set from TSR. I wrote about it way back here, discussing all its updates new rulesets, and probably have to update it further since new and exciting material, like Jeff Dee's Bethorm has shown up on the scene, and Brett Slocum's Heroic Age of Tekumel is in the offing.

But what I really want to talk about right now is fanzines. I'm a fan of fanzines, in particular since they drill right down to a specific, almost obsessive, level. On the creator's side, they are a labor of love, rarely money-makers, closer to hobbies, and contain only that which the the creators themselves wish to see. On the consumer side, they are for a very, very small group who have a deep interest in the particular subject. One without the other, and the fanzine ceases to be by or for fans.

Enter The Excellent Traveling Volume by James Maliszewski, who formerly ran the late, lamented Grognardia blog. It is a Tekumel fanzine, and even further concentrates on the original TSR (later reprinted by Different Worlds) versions of the game.

TETV is a hand-crafted music box of a 'zine, each issue laying out expanded content for the game. The original set concentrated on Tsolyanu, but the booklets increase character creation for the Red Hats of Mu'ugalavyani, the Salarvya, and the descendants of the dragon-riders of N'luss (No, I'm not putting in the accent marks. Live with it.). This expanded section gives both personal names and clans of the nations, and bits about their culture and religions, and how they compare back to the Tsolyanu that most fans are comfortable with.

Maliszewski also delivers in each issue patrons who can be the foundation of overland adventures. One of the challenges of Tekumel in its various incarnation has been a lack of what you do when you get there, though there have been definite attempts to rectify this. The patrons provide that vibe, very much in an old Traveller-style mode, where you get the background on the character, the job that is being offered, and then several options on what is really going on. It is both a good read and provides good hooks for the game.

Also in the issues to date have been small adventures, originally part of a larger dungeons for more traditional adventuring, but now expanding to a full tomb or abandoned spaceship (why yes, they have spaceships in Tekumel - didn't you know?) Again, this hits up the old canard for GMs unsure about what to do with their characters. Lastly, there are articles about new monsters, or races such as the Mihalli, or various Underpeople. All within 32 pages of nicely dense text.

And the art. It is charming in its own right, and evokes earlier zines like the early Unspeakable Oaths and old-school games like Arduin Grimoire. The cover shown above is by Zhu Bajie (A pseudonym from Journey to the West?), and interiors range from OK to excellent.

I am actually of two minds in recommending this 'zine. On one hand, it is very, very good, and if you are a fan of Tekumel, and the original EPT,  then it is worth the cost (ten bucks a pop, Paypal only). But one of the greatest dangers of a fanzine it is its own popularity. Success often drives improvements to the work, but often robs it of its charm. I loved the original digest-sized, color-paper cover versions of the Unspeakable Oath, for Call of Cthulhu. It felt like from fans, for fans. That 'zine still exists in a glossy, irregularly-published version with more ads from the increasing Cthulhu market, but it's not the same.

TETV is produced at Mr. Maliszewski's own speed, which produces excellent work but not a strict schedule (Call it Quarterly-ISH). There is no subscription (and with that no pressure to produce on a treadmill, allowing the work to grow), but he has a mailing list for announcing when the next volume is out. He has been making older issues available, and it is worth checking them out.

The Excellent Traveling Volume succeeds in its greatest form - it makes me want to play in Tekumel again. And that is high praise.