When last the kids from Kent engaged in a "culinary adventure" in Seattle it was into the hot (as in spicy) territory of Joule up in Wallingford. I mentioned that the restaurant shared a building with another hot (as in popular) spot, The Whale Wins. Both places did tartar, both were in the same location, both were covered in Bon Appetite, so yeah, we had to do both.

But after our inflamed experience with Korean fusion barbecue, we were a bit reluctant. We still meant to get to the other half. We really did, but time passed and we had other things and finally, only finally, we got there on the excuse of my birthday (thanks for all the well-wishing, Internet!).

Of course, one does not get to Wallingford without adventure! Like getting to the South end of Seattle in a half-hour during rush hour, followed by an excruciating trip across town, from south to north through cross-traffic. Said trip involved a number of blocked cross-streets, a map program leading us into the worst part of the mess, a couple of  illegal road maneuvers on my part that I would never normally consider, and culminated with the Fremont bridge being up (which was actually the most pleasant diversion during this part of the trip). Also, Parking: tough in the area, and while we ended up parking in the neighboring EVO lot, we didn't think anyone from EVO was watching since a sketchy character was breaking into a car in the lot even as we parked.

So, the venue. Open, light framework, with tables laid out close to each other (why yes, we ended up talking to our neighbors about what we had ordered, and there was a wedding being planned nearby). The patio was open, but the challenge at the relatively early hour was that half the seats faced the setting sun. I placed myself between the Lovely Bride and the fiery sky-orb, so that her eyes were shaded and I was surrounded by a nimbus of flame.Other diners were holding menus up to protect themselves from the lumens.

The food, of course, was superb. We split a tomato/ricotta salad and a large order of clams, then two separate orders of the lamb tartar (one with egg, one without) and bread and butter. Yeah, for those Olive Garden-types, they charge for bread and butter, but it's REAL good Columbia City bread and butter. The tomato/ricotta salad was fresh and luscious and the best fresh tomatoes the LB has had all year - she almost ordered a second one for desert. The decision of the clams was split - I thought the addition of corn overpowered the clams, but Kate really liked the sweetness it added (oh, and we didn't need to order a large, though we created a jenga-tower of discarded shells by the end of it). The lamb tartar, with lemon, mint, and capers, was the main event, and was perfect melt-in-your-mouth good. Service was prompt and friendly and easily at hand (I did a quick count and found ten members of the waitstaff on the floor for this relatively small space, none of which were standing around). Good food, good service, and good ambience.

The Lovely B's verdict? "We have to come back here again, and just get double orders of the tomatoes and lamb". And I have to agree with her. If I can find parking.

Email ThisBlogThis!Share to TwitterShare to FacebookShare to Pinterest
Labels: Food

I talked briefly about my very short trip to China earlier. It was a short trip - fly in, two days of interviews with the media on GW2's release in China, an impressive party, a day of playing tourist, hitting the Forbidden City and the Summer Palace, and then out. Hardly enough to frame any definitive opinions. But I didn't mention the drones.

Yeah, the GW2 celebration started with a reception with a cover band, models posing by GW2 exhibits, and a lot of fans, including ones ignoring the cover band and the models and playing GW2 at computers set up around the perimeter of the huge patio area. The entire shindig was in a former industrial area turned art district, so we were surrounded with old gas works and cement storage facilities. And in the middle of this, I heard a burring noise, and looking up, saw a trio of mini-helicopter drones hovering at the edges of the property.

In any event, the party went well and I forgot about the drones with everything else that was happening. And then I came across a video by Trey Ratcliff, a gifted photographer, who was taking pictures of Beijing by drone. And while the video is titled "Beijing From Above, AKA the Story of How I Was Detained By the Police for Flying My DJI Quadcopter", the video doesn't mention the detaining, the story of which is instead found here.

In any event, it a series of shots of various Beijing locations, many of which I did not get to visit. It does capture the grandeur (and to my mind, impersonal nature) of the Forbidden City and the beauty of the Summer Palace (which you should go to, but be prepared to hike). And then, about the 3:09 mark, there was something that, to quote the clickbait sites, "Blew my mind".

I mentioned that the GW2 party culminated in the unveiling of a huge 40 foot Rytlock statue, which, I had been told, would be an installation in this art district. Yet I was still surprised when I came across a picture of him, in all his charrish glory, taken by a quad-copter, no less.

Check it out. It's pretty cool.

Here's an interesting history bit about the burning of Washington - the conventional wisdom was that it was a reprisal for the burning of the Canadian town of York (now Toronto). But here's an article that makes the point that taking Washington was not a British goal, and the the burning of the public buildings was more the result of someone firing on the Brits expecting a traditional surrender, and in the process killing the commander's horse.

Of course we don't agree on history - we can't even agree if the song was recorded by the Arrogant Worms or Three Trolls in a Baggie. 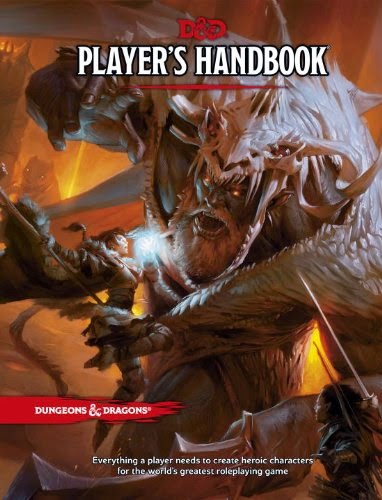 So late week I received my consultant's copy of the new D&D Player's Handbook, and have spent the weekend leafing through it. And (spoilers) it makes me excited about playing D&D.

First off, the nature of my consultancy - I was asked by WotC to serve as a consultant, and provided with a (very) early draft of the rules. And, to be frank, I wasn't very impressed, and said so (I believe I used the word "meh" in my initial review). Not that it was horrible, but that it wasn't very impressive, such that if someone pressed it into my hands and said it was their homebrewed set of rules, or their favorite OSR (Old School Revision/Revival/Renaissance) game, it would have been fine. But from the guys who have taken on the mantle of D&D, it fell a little short.

That was then. Now, the book in my hands is a charming combination of old and new, paying attention to the past without slavish reverence, and, more importantly, moving the dialogue of games forward.

(And yeah, I've said this a number of times, but I think of game design as a dialogue - every new edition or new game in the hobby field has a strong sense of "Yeah, that's OK, but HERE'S how you fix it". It is a conversation, and we expect new editions to be better because they build off of what has gone before).

And yeah, I can see the previous editions peeking through from all the angles, from the foundational work of the first AD&D to the increasing AC of 3rd to the heroic tiers and grid options of 4th. Here is the latest version of the UA's Barbarian and 4th's Warlock. It feels complete. It feels right. This is no basic set, no starter, no "to-be-continued" introduction. It feels whole.

Better yet, it is paying attention to its heritage more than any other edition. While earlier editions leaned heavily on mythology or other writers in the field, this one actually fesses up and admits that yeah, people have been writing D&D novels for 30+ years now, and it quotes from them. And it does not rely on a particular home world exclusively - it moves around in its examples from FR to DL to Eberron to mighty Greyhawk. It talks about the gods of all these places, plus game versions of historical pantheons. It becomes a unifying edition.

And hey, in the back, the Great Wheel of the Planes is back. That makes me both very happy and amused.

The rules are both comfortable for us old grogs as well as trying new things. I like the way they settled on the Proficiency Bonus (there were various versions along the way, as other playtesters will tell you). I think the advantage and disadvantage approach is a sweet way of handling such situations without breaking down into a roster-check of every possible plus or minus that some editions thrived on. Still moving my ancient brain around the idea of using Hit Dice for recovery, but I like it as an attempt to blend the short and long rests into the new game. And the inspiration concept feels like it can trace its roots back through FATE and other indie games.

The presentation is clean and the rules are eminently readable. Sidebars highlight but do not overwhelm. And the entire volume feels like the opening gun for new projects of classes and feats and worlds. There is enough here to show the potential, and get you excited.

I've got a couple gripes, but they are mostly in the graphics end (I will probably come up with more grouses about the mechanics as I put them into play, but that is fairly normal - the art always hits you first). The use of a red logo on a red cover is regrettable. I've never been a fan of full-bleed full-page color art, even when it was 2nd Edition. And the halflings look like bobble-heads more suitable for The Great Khan Game. On the other hand, the armor and outfits tends towards useful as opposed to, um, heroic, and it looks like people can actually go into combat wearing this stuff.

The WotC team set a very high bar for themselves, and released this new edition into a very different landscape than any previous edition. It had to separate itself both from other games as well as lay claim the D&D's heritage. That's pretty tough. But I think the new Player's Handbook shows it can be down, and I look forward to seeing the other core books.