A couple weeks back, the Lovely Bride and I spent a week in Ashland, Oregon. Ashland is this charming little town just north of the California border that is famous for the Oregon Shakespeare Festival, which runs most of the year and brings in tons of tourists, most of them, its seems, being retired teachers. Ashland reminds me very much of Lake Geneva, WI, but instead of a lake, it has the Bard as a draw. 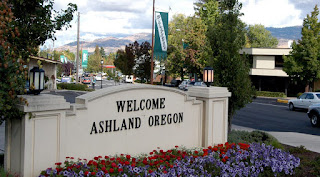 Not all plays at Ashland are Shakespeare. They do all sorts of flavors of Shakespeare, from cannonical reads to switch-ups in gender roles and time period. They also do what I call "Shakespeare-adjacent" plays, which have some connection with the Bard of Avon, or modernize his words but keep his plot, or use Shakespeare as a springboard (Think "Rosencrantz & Guildenstern are Dead" - which does assume some knowledge of "Hamlet".). And there is a big-ticket non-Shakespearean item to bring crowds (this year it was "Hairspray" - we passed on that).

And then there are the indies - plays that are not necessarily part of canon, or canon-related, or big ticket. They're just good plays. This is like hanging out in the Indy game area at PAX - good stuff, sometimes unevrn, but things you're not going to see elsewhere. Sometimes they travel - coming up to the REP, but sometimes they are only to be seen there.

This year, we shied away from the Shakespeares themselves - The comedies being offered were not the Lovely Bride's favorites, and I am still so overwhelmed by the Mac Beth (Shakespeare adjacent) from a few years back that another production of Macbeth would not work for me. We end up with five, two of which were OK, and three of which were really good that it makes my own writing feeling wanting. Here's the list:

Comedia of Errors; This is Shakespeare-adjacent - a bi-lingual version of Comedy of Errors, where Sparta and Ephesus are transformed into the US and Mexico. The original is as close to a sit-com as you get with Shakespeare - short, broad, ridiculous in places (two sets of identical twins are separated at birth, both having the same names, and when one set ends up in the town where the other set lives, wackiness ensues). The overall change into the serious nature of immigration and ICE really casts a realistic and hard pall on the proceedings, and while all the Spanish lines get translated (which is good, and gives the gringo audience the feeling of exclusion that Spanish-speakers often face), it runs up against the broad humor of the commedia dell'arte style.

How to Catch Creation: One of the best of the show, it is about creativity, intentions, and responsibility. The creation may be starting a family or art or writing. All the characters are creators in some fashion, and it deals with pitfalls and relationships, pulling all the characters together. The actors are top-notch and the stagecraft moves us between locations and times wonderfully. Go see it if it shows up around you.

Cambodian Rock Band: Another really good one, dealing with the heartache and tragedy of the Cambodian Genocide. The play is incredibly well set-up. A young woman in modern Cambodia, working on case against the director of a prison camp during the genocide, gets a visit from her dad - who is very dad-like, filled with old grudges and pushy parentalism. But it turns out the story is about Dad, who was once a singer in a rock band and a prisoner in that camp. The director of the camp narrates much of the story with a bouncy, Loki-like flair, and only slowly drops the mask to reveal what a monster he is. It is ultimately the Dad's story, yet after all the suffering, redeems itself with its music. A lot of Dengue Fever, and at the end, the world's oldest mosh pit (in which the LB accidentally body-checked the actor playing the prison-camp director).

Between Two Knees is, well, uncomfortable. Mostly Native American cast talking about the American genocide (yeah, it's been that sort of set of plays this year) of its native population, cast in the framework of a cheesy Indian show. Sort of like most of the skits in the third half-hour of SNL in the 80s. Cringeworthy as it hits a lot of truths and takes some cheap shots (Goes after Indian Schools but targeting only the Catholic versions, which is not quite punching down - mostly punching ANOTHER group that is an easy target). Really redeemed itself after the intermission, as it moved from the history lesson to a more living memory (and the Pine Ridge Reservation Protests of the 80s), But there were more empty seats after the intermission.

Mother Road: Imagine Grapes of Wrath run in reverse. The last of the Joads, the ones that stayed behind in Oklahoma, goes looking for the last of the California Joads, to leave his farm to. He finds that the California branch of the family went to Mexico, and the last survivor is Hispanic. So they drive back Route 66 in a fever dream of distrust, old friends, old grudges, and the racial nature of America. Amazingly good performances, from almost the same cast as did the Comedia of Errors. It captured the episodic nature of On the Road and Grapes of Wrath, and was breathtaking in a lot of ways.

And wrapped around this was a lot of good food and sitting on the patio outside the bed and breakfast with the local cat and way too many fearless deer that invade the town and eat the local gardens. A good trip, and now I am ready for Fall.

One of the advantages of blogging as opposed to living solely on the Facebooks is that Facebook doesn't really have a sense of permanence. You put something up, and within a day it is buried beneath a huge pile of other posts.

So, here's a note that I did an interview for the Reading the Realms podcast.  Max and Paula have been reading the entirety of the Forgotten Realms novels, and have had ancient authors such as Jim Lowder and myself in for interviews to talk about our work. True old-school goodness viewed through a modern lens.

Here's the link for the entirety of podcasts on Soundcloud as well.