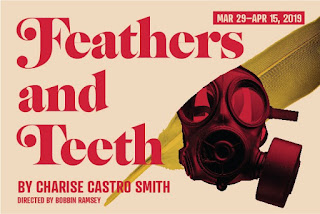 I review a lot of plays in this space, but the overwhelming majority are with the Seattle Rep because, you know, season tickets. So it is a fairly comfortable process. But the chance sometimes offers itself to get out of one's comfort zone and find a new venue and a new attitude to towards theatre. In the case of Feathers and Teeth, a colleague's working group had the chance to provide animations for this show, and I promised I would show up. Glad I did. But more about that later.

12 Ave Arts is a nice, modern, small (about 100 seats) space up on Capitol Hill overlooking downtown Seattle. And if the major theaters playing musicals reaching up the avenues to the Seattle Space Needle area are the Broadway of Seattle, this area of the city is off-Broadway. Literally. No, really. Broadway is the main spine along the top of Cap Hill and this theater (and others) are a couple blocks east. The 12 was opposite the space where long ago, we watched Mike Daisey speak of famous men, but I haven't been back to it in years.

Anyway, the play. Christine (Rachel Guyer-Mafune) is 13 years old and is convinced that her future step-mom is a demon. Carol (Samie Spring Detzer) in the potential step-mom/demon in question, a nurse who came into the house to help Christine's terminally ill mom and now, after mom's death, is intent on staying on. Arthur (Brandon J. Simmons) is the hapless/helpless/hopeless father figure who is the third leg of this familial triangle. Hugo (James Shilling) is the German kid from next door.

That's not completely accurate, but that's close enough for discussion. Because one of the things about Feathers and Teeth is that it keeps you off-balance throughout. Christine may be persecuted but she may be psychotic. Carol may be a candy-coated demon or she might just be merely mortal and manipulative. Arthur is an 80s sitcom dumb dad, a conciliator, and/or something much worse. Hugo is pretty much Hugo. But the off-balance nature is in part how quickly the characters pivot from one emotional state to the another. Carol goes from sugar sweet to vamping to  vampiring easily, while Christine rolls from 13-years old to would-be Buffy the vampire slayer. It is sort like iCarly crossed with grand-guignol theatre.

Arthur shows up early with blood on his hands early on. He ran over ... something ... in the driveway, something with feathers and teeth (no, not an archaeopterix - something older). The ... thing .. confined to a pot roast pot, is a monster. Or its a creature of vengeance sent by the dead mother. Or it is something else worse. And that contributes to the feeling that all is definitely off-kilter in this midwest suburbia. And that disturbed feeling powers through the play with a collection of family arguments, jump scares, and dark humor.

The set design, crafted for this small space, also hits up the off-balance nature. The center is a suburban kitchen, but the walls break up into jagged space halfway up, and the proscenium surrounding the space is broad, uneven, and angular. It succeeds in a way that the bare, tilted stage from Doll's House Part Two fails.

And then there's the animation, which is why I was there. A colleague runs Broom Cupboard Studios, which does animations, TV show pitches, and projects like Detective Corgi. His team was brought on to provide animated sequences within the show. The back window of the set usually shows a backyard, with light changes to show time progression, but is also used effectively to illustrate monologues/flashbacks during the play, giving them a richer context. Plus, very useful in the sections involving demons (along with that wide, out-of-kilter proscenium). The animation really nails down the story with a high class professionalism which equals to/outweighs some of the monkeyshines at the Seattle Rep (and Repsters should take notes on the seamless integration).

Ultimately, the animation, sets, acting, and writing all builds to a horrific conclusion, a combination of interior and exterior horrors. I've been trying to figure out how to convey horror on the stage without tipping one's hand to hokey overkill, but Feathers and Teeth manages to do exactly that. It has been playing to full houses up at the 12 Ave, and will do so for another week. Good, creepy stuff.