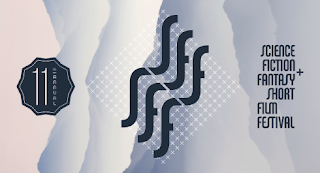 So yesterday Stan and I went down to the Cinerama in Seattle (not too far from where I work) to spend about five hours watching short science fiction films. This would be the Science Fiction & Fantasy Short Film Festival, presented by the EMP and SIFF (Seattle International Film Festival).So yeah, it is the SFF SFF presented by SIFF.

The reason for us going was that a friend from WOTC, Cindi Rice, was a producer on one of these pieces. She wasn't go to make the showing, but knew that the director, Reed Shusterman, was going to make it, and had some extra tickets. Hence, Cinerama theatre, Saturday afternoon for about five hours, encompassing 19 films.

Their film is Goblin Queen, and (spoilers) was my fave of the group. The setup is pure Disney Channel - teenage girl finds magic amulet that transports her to a fantasy universe. What makes it cool is that it does not follow the girl, but rather her mother - a bit of a control freak, who is dealing with her daughter disappearing at a moment's notice. And then when things from the OTHER universe comes spilling into ours, things get wild. Goblin Queen is well-written and well-acted, but what really makes it a fave is that it works without a huge amount of special effects. Tightly-packed and concise, kept to the small house in the real world, it worked its magic without a lot of post-production (Indeed, in the after-movie interviews, the directors who made it to the festival complained that their films were two days to shoot, two years to get the post-production right).

One thing I also liked about Goblin Queen was the sense of resolution to the film. A lot of the short films shown are demos, teasers, trailers, or proof-of-concepts for potential larger films. The problem is that if they don't resolve the story, they leave the viewer hanging. There was a lot of that in the festival - Aden (winner of the Judges Prize and the Douglas Trumbull Award for Visual Effects) was an extremely well-done, well-conceived, well-executed chase sequence between an agent of unknown origins and child's mechanized imaginary friend, but it was the first ten minutes of an unfinished movie. The Garden, a tale of humanity integrated into AIs is excellent but also felt like it strained to be a full feature. Mis-Drop, a take on a green soldier going into battle, would be a great first five minutes of a video game. The Red Thunder WOULD be the first five minutes of a Disney Channel show where a teenage girl borrows her mom's car and discovers her mom's secret.

All this is well and good (and make no mistake, these are short films that if they grow up to long films, I would watch), but all left me with more questions than answers.

Then there are the WTFs - In Bionic Girl a scientist creates an big-headed android duplicate who replaces her and sends her to hell (There's a lot of singing. In french). Disco Inferno starts with Hammer-Film virgin sacrifice and ends with an office party and has a lot of weirdness in between. Tristes Deserts (A Robot's Tale) was described on Twitter as a Daft Punk video, and involves a white robot with an Elizabethan neck ruff fighting an ebony octopus. And poodles. There are poodles involved.

OK, but what else did I LIKE? Frost, a tale of arctic hunter scavenging in a sleeping city was extremely evocative. The No Look Dunk was cute and short and played with time travel just as long as it had to. Juliet links sex doll robots with iPhones in news clips and commercials.

And The Brain Hack. Serious seizure warning on this one. No, not kidding. This one took the Audience Award, was an excellent, subversive, knowing film that built suspense mercilessly in a film about a refining images to stimulating the "god" center of the brain. Its very good, and got me seriously creeped out, and would not be out of place at the HPLovecraft film festival.

All in all? Good. If you get a chance to see these films (and some are on YouTube or Vimeo from the links above, while others get attached to other films in showing), hunt them down.

The Rep continues a very, very strong season with a play about social work. And this is one of the benefits of season tickets: I honestly can imagine a world where I would wake up one Sunday morning and say, "You know, I'm in the mood for a play about social workers, meth addicts, and religious fundies all using a baby as a football", but that's only because I have a very good imagination. Most of the time it would (at best) a "heh, that sounds interesting" and never follow up on it. Season tickets, prepaid, gets me to the theater for gems such as this.

That previous described scenario, by the way, is the plot. We meet the meth addict parents of Luna Gale first in the emergency room. The infant child of the title has been brought in with extreme dehydration. Both parents are strung out at different stages - Karlie (Hannah Mootz) hyper and Peter (Drew Highlands) crashing. They are confronted by child protective services worker Caroline (Pamela Reed), who challenges the parents to clean up their acts and in the meantime must find a safe home for the child. Fortunately, Karlie's mom Cindy (Anne Allgood) is a enthusiastic and willing candidate, and is a nurse's assistant with a clean home and a sunny attitude. But Caroline finds out that that grandma is a holy roller of the end-of-days variety, and when the grandmother wants full custody Caroline drags her heels. Pastor Jay (Adrian LaTourelle) from Cindy's church tries to moderate the situation, while Caroline's boss (Alex Matthews) pushes hard for a speedy resolution, plus Caroline is dealing with a horrible case load and the former client (Pilar O'Connell) who has now aged out of the system.

There's more going on, but Caroline is at the center of it all, a straight-forward professional woman with an eye for what goes by the book and how the rules can be bent in order to get the best resolution for the children entrusted to her. She works from the gut and is by turns measured and threatening, knowing the power she wields while being frustrated by the limitations of that power. She is resolute and defiant and heartbroken all at the same time, and Ms. Reed does a fine job assaying her.

Indeed, all the cast does well, and in part it because the playwright's deft hand with characters and situations. Gilman does her original work with the Goodman in Chicago, but a lot of her plays have made it west to Seattle. Bad Dates (which I missed), Spinning into Butter, and the haunting Boy Gets Girl all have shown up at the Rep, so she is as much a regular as the actors.

And through her plays, Gilman examines and power and powerlessness of institution, of the precarious balance of playing by the rules and playing with the rules. Caroline is a master of the subtlety of working within the system, and while not given to quixotic tilts at windmills, is used to folding the system back on itself to attempt some measure of a happy ending. And Gilman promises no happy endings in her works, so you have to satisfied with what you get, just as in real life.

Gilman also masterfully shies away from making characters black and white, instead looking at them as shades of grey, with their own traumas and triumphs. The meth addict parents have their redemptive moments, and the Christian characters are presented in a positive, extremely balanced fashion And this is red meat for actors. Anne Allgood is fantastic as Grandmother Cindy, mixing vulnerability and desire to make good in such a convincing fashion that you wonder if Caroline is wrong to deny her the child. Similarly, Pastor Jay is not some Simpson's-level preacher, but comes across as a real individual maintaining his faith in an often-hostile work. Similarly, Drew Highlands' drugged out Peter rises to the challenge of making his surfer-dude father more than a caricature.

But at the center of it, is social worker Caroline, beset from all sides, trying to figure out what is best for the child while dealing with her own failures. Pamela Reed, who was excellent in Who's Afraid of Virginia Woolf as the lush, brazen Martha, is equally amazing as a tired, worn Caroline summoning up the courage to believe in her own gut instincts, and navigating the channels of bureaucratic organization with the goal of saving Luna Gale.

The stagework itself bears mentioning - it is sliding box of Tertris pieces, with scenery gliding onto and off stage in both directions in a neat and concise manner, selling the various scenes without requiring a great deal of setup or letting the action lag. It is minor point in face of both excellent writing and fine acting, but delivers a call-out.

If Ms. Gilman's work is representative of modern theatre at the turn of this present century, then we can say that the medium is still moving forward and evolving using the most basic of components, creating engaging drama with believable characters and strong underlying morals. A very well-done play.