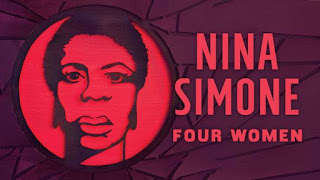 Every year the Rep throws into its mix a music-based production. Woody Guthrie, a celebration of Americana, a drag cabaret recasting modern pop as 1920s hits, a storyteller with an accordion. Success is often mixed.

Nina Simone is a singer I have not heard much of: her stance on Civil Rights (and moving to an overseas label) resulted in her being pretty much disappeared in popular media. She made her claim with her brilliance on the keyboard and her vocals - unable to break through the color barrier in classical music, she turned to nightclubs and established herself there. Other singers like Eartha Kitt and Aretha Franklin weathered their political opinions, but Simone was not as fortunate. World-wide she's well-known.

The turning point for Simone was the 16th Street Baptist Church Bombing in Birmingham in September of 1963, which killed four children - Addie Mae Collins, Cynthia Wesley, Carole Robertson, and Carol Denise McNair. Previously she had made her mark singing from "Porgy and Bess" to comfortable white audiences. The bombing in Birmingham radicalized her and she wrote her first protest song - "Mississippi Goddam" supposedly in an hour, and released it in 1964.

The play moves Simone to the interior of the church in the wake of the bombing - the cross is toppled but the piano survives. Simone (Shontina Vernon) is seething with rage at the deaths, and seeking to express it in her music. She is joined by three refugees from the riots and water cannons outside - Maid Sarah (Shaunyce Omar), mixed-race activist (Britney Nicole Simpson), and prostitute Sweet Thing (Porsha Shaw). Together, the four women are characters from another Simone song, "Four Women". The women spar and bicker as Simone wrings her lyrics out and the ghosts of the children cry for justice.

Does it work? Sorta. The back stories and personal secrets of the characters are presented too easily for the distrust they have for each other. There are calls for sisterhood and solidarity, but also some circular firing squads as they complain of ground-level challenges to the movement as opposed to the oppression of the overclass white males. The songs don't always fit exactly right into the play that surrounds them, and a lot of them are from Simone's later works. As a result, you don't a good feeling of the singer's own journey into demanding justice.

The singers are all strong, with Shaunyce Omar as the strongest of the group  - though her character says that singing in the choir is for when you're not good enough for soloist, she's definitely the solo performance. Vernon's Nina was often undermiked and overpowered by the music itself, and while the lines were there, the imperious nature of diva only rarely surfaces.

Yet the show collects itself and rallies to an excellent finale in the song :"Four Women", and in the encore "Freedom Song" (By Vernon, not Simone) was a perfect capper. In the conflict of the four women, there is the discomfort of the past and the uneasiness we are seeing outside our window today. Our churches, temples, and mosques are burning today, and the darkness Simone struggles against is still with us. So call it a bittersweet ending, hopeful but wary about what tomorrow brings.