The Return of No Quarter (Pieces of VIII Edition)

It has been a while, but let us engage in the yearly ritual of the America the Beautiful series (AKA the National Parks Quarters, though most of them are not about National Parks). We are now in the eighth edition of this venerable review (which is the sequel to an earlier series). But let me address a matter from last time we talked on the subject.

I asked last time if quarters are getting lighter. The metal FEELS lighter, and seems less substantial than old quarters. But I was not sure, since I did not have a scale suitable to weigh them. Spurred in the spirit of scientific inquiry a friend produced a scale that would measure small amounts, and two piles of quarters, old and new. Weighing a similar number of each type would magnify any discrepancy.

And the results were ... surprising. The two stacks came up pretty even, but the NEW quarters were just a little heavier than the OLD. So my initial assumption (which I now blame of being an old fogey) was wrong.

And that is why we science.

Anyway, here's this year's bunch of quarters. For those new to this (and shame on you, it starts way back here and here ), here's the rating system: 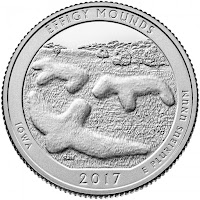 When the Europeans pushed west across the North American continent, they were wandering into an apocalyptic wasteland. Disease brought by earlier arrivals decimated the local populations, and the remnants were pushed out or swallowed up by the new culture. However, the newcomers found mounds throughout the northern woodlands, large earthen structures built by human hands in isometric designs or animal shapes. When they weren't looting them for valuables or tearing them down for fill, the newcomers posited who could have built these structures - ancient civilizations, lost religious tribes, even space aliens. Anyone except the ancestors of the people they whose lands they were now claiming.

So. Effigy Mounds. These are in the northeast corner of the state (have you noticed that a lot of these places are far away from the center of their states?), hard on the border of Wisconsin, across the Mississippi from Prairie du Chien. It is a collection of 200-some mounds, including many in the rarer animal shapes, including birds and a procession of "marching bears". Yet it is interesting to note, per the wiki article, that even under Federal protection we're still dealing with looting and unauthorized construction.

The coin itself? Peeps in the grass. Sorry. Maybe it's the season, but I'm looking at this and it looks like marshmallow peeps, cast-offs from an Easter Egg hunt. It is a good and accurate representation of the shapes, or even the arrangement (I'm looking at maps here, and there are three mounds in tclose proximity that look just like that), but the end result looks a bit blobby. 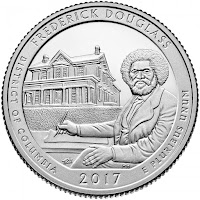 So in writing this one up, I went back to the last time Frederick Douglass was in the news - When the President, in a ham-handed recognition of Black History Month, referred to Fred as if he was still next door in a briefing room waiting for Lincoln to show up. Looking at the quote, it seems to be the traditional word salad that most people have come to expect from our gonna-get-better-any-moment- chief executive, but at least Mr. D got a shout-out.

But that's not what I'm here to talk about. Instead, there is something else going on here. I mean, Frederick Douglass was a major statesman, writer, and linchpin of abolition (we noted last year that he gave John Brown some very, very good advise about attacking the government (that it was a very, very bad idea)). But Washington DC is chock full to the rafters with monuments run by the National Park Service. How does Fred Douglass (regardless of his achievements) get the nod here?

Then I found this: A Frederick Douglass quarter, with a flipped image to the current version, was one of the nominees for the STATE quarter series, only to be beaten out by Duke Ellington (whom I always connected with New York City and the Harlem Renaissance). So the Freddie-D quarter was already a backup, and got the slot as a consolation prize.

Still, it is nice quarter, a mirror of Mr. Ellington's, Mr. Douglass at his writing desk, the Haney Place in the background, which was finally finished by Alf and Ralph. A perfectly nice coin, but I have to call shenanigans on the selection process. Alternately, I could credit them with saving money on not commissioning a new piece but instead using pick-up art. Nah, I will go with shenanigans. 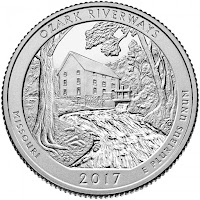 There seems to be a definite anti-urban pitch to these coins. I mean, I get it - it is the America the Beautiful series, and it has done a pretty good job at pointing out national forests mountains, and other natural sites that normally get overlooked, but would it kill them to point out a few more locations that people may have actually seen? Missouri did put the Gateway arch on the state quarter, but turned St.Louis into a fungal forest in order to do so.

Anyway, the the Ozark Scenic National Riverway is a tetris-block assembly of territory along the Current River and the Jacks Fork. It apparently has great canoeing and tubing, along with a number of natural springs. The coin shows Alley Mill, which used steel rollers to grind grain and is still mostly intact. And it is really not that bad, what with the tree framing the mill and the water (which doesn't look wide enough to qualify as a canoeable river, so let's call it a tributary), dominating the center.

Its a challenge, when the feature you are supposed to be centering on is a river, and supposedly flat river at that. It does the job. 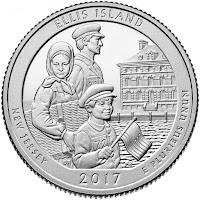 Here we see a similar-but-different problem to the South Carolina Fort-Moutraine-but-not-Fort-Sumpter quarter of last year. We have Ellis Island which is (mostly) part of Jersey (and has been since a 1998 court case), but what attracts everyone's attention is Liberty Island and the large green lady there (No, I am not talking about She-Hulk). On one hand, the entire complex is Federal property (so it really doesn't matter WHO owns WHAT on the island), but on the other, New Jersey DID claim this for their quarter.

Ellis, of course, was where a good chunk of immigrants debarked back in the day. That day would be about 3 decades surrounding the turn the last century. Millions of immigrants passed through its gates during that period, though it was not the only immigrant port in the US (other ports conducted their processing on the boats that brought individuals in), it has the rep for the biggest and most permanent. The cool looking building on the coin is the second Immigrant Station. The first was made of wood and burned to the ground in 1897. Crackdown on immigration laws starting in 1924 dwindled the use of the island fast, and eventually it became a detention and deportation headquarters, sending people the other direction.

The happy people shown on this coin most likely showed up before we shut the gates (again) in 1924. Given the number worn on their shirts, they come from the Village, a small state that remains part of the United Kingdom but is run by a secret government agency. These new arrivals are clearly happy to be in a new land with welcoming peoples and lack of giant white beach balls that haul them back to the Village if they try to escape. The woman, pensive, is wondering if she left the iron on.

The coin design itself is pretty good - It captures both the site and its purpose, working together to make it a better coin. And of course, New York claims to be 5 cents worth of the coin itself. 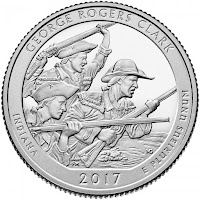 This coin commemorates the first official "fun run" in Vicennes in 1777. OK, actually, it represents George Rogers Clark (he's the one in the hat) leading his forces to take Fort Sackville. Or rather, to retake Fort Sackville, since they had lost it to the British), actually, I guess it is to re-retake since it was originally a British fort that the rebels took, then lost, then took again. I mean, this can only be expected with a fort called SACK-ville. I mean, why not just call it Fort "The Key is Under the Mat"?

OK, fine, George Rogers Clark was dispatched early in the revolution to the part of the world that the Americans would call "The Old Northwest", the British called "This is part of Quebec, now", and the natives called "What are all these Europeans doing in our living room?". The Brits had put up forts through this area, but had problems funding them, until the Quebec Act put the cost on the colonials (which did not end well). Clark bounced all over the region, capturing British outposts and founding Louisville in the process. This scene shows him and his men moving through the swamps to take the fort (we don't know exactly where it is (no really), but is somewhere off to the right of the coin).

It's not a horrible coin. It is well-crafted, but I did have to go through a long song and dance just to explain what the heck you were looking at. Which is a pity, since the site of the Park itself has a really cool, distinctive memorial building on the site, with statues and murals (it would be, dare I say, both beautiful and in America). Using the memorial itself would have been a cool coin (though I would have pointed out similarity to the Jefferson Memorial - same architect), and is a missed opportunity.

And that may be ultimately what has started to bother me about the coins in these series - they are so innocuous. Mountains. Streams. Questionable actions. The carving itself has gotten better over the years, but the subject matter has become more bland in the process,

Next Year: We head for the beach with a lot of National Seashores - three islands, a set of rocks, and some Canadians. I'm holding out hope that the Canadians are the most interesting.