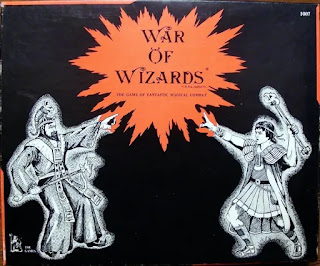 Over on his blog, John (Sacnoth) Rateliff has been talking about TSR boardgames from the eldest of days - Lankhmar, Cohorts, Battle of the Five Armies, Knights of Camelot, 4th Dimension and Warlocks & Warriors. I know he doesn't have War of the Wizards in his collection, so I will talk about this one.

There is an interesting thing to note. In Elusive Shift, Jon Peterson makes and excellent case for how early D&D was shaped by players who came in from the wargaming side and those who came in from the SF Fandom side. I noted that a lot of my generation of designers were from the wargaming side of fandom. However, at the very beginning, we had a strong component of established SF/Fantasy authors who were contributing to the milieu. authors such as Fritz Leiber, Gardner Fox, Harry Fischer and L Sprague DeCamp were not only helping create the fantasy genre we mined in the game, but were also creating new games in the early TSR years.

In addition, we have early games like the original Dungeon! (which predates D&D) and M.A.R. Barker's War of the Wizards. War of the Wizards is a game set in Tekumel, Barker's setting for Empire of the Petal Throne. The games were released pretty close to each other, WotW name-drops a lot of the places, creatures, and background color of the setting. It never mentions Tekumel itself by name, but rather the nation of Tsolyanu and refers to the RPG as "Petal Throne". The gods are the Lords of Glory and the Rulers of the Shadows and generally identified as good and evil, or law against chaos. Creatures include a lot EPT standards, along with more traditional names that you can use instead.

The concept of the game is very simple - two spellcasters (choice of sorcerer or priest) are at opposite ends of a football field. They cast spells at each other, which then advance down the field at their opponents. Spells can affect other spells, walls, and summoned creature, and ultimately the opposing wizard, who has so many hit points. Kill the opposing wizard, and you win.

The first version of this game was self-published by Barker and is apparently rarer than hen's teeth. The "second edition" was in a plastic bag from TSR, and was quickly replaced by one of TSR's early boxes. I played the game itself back in college (Purdue University) in the Boilermaker Grill in the basement of Tarkington Hall. I got hold of the box version is one of TSR's frequent clean-out-the-library purges. So opening the box, I found I had versions 2 and 3, both with unpunched counters, along with the ruleset for the 1982 Car Wars minigame and instructions on how to paint the Bear Chariot miniature from Ral Partha.

War of the Wizards was a classic "wizards duel" game, and, like Empire of the Petal Throne, was extremely advanced for its time. Released in 1975, it showed that early TSR had a strong commitment to Barker's work. A set of miniature rules followed, and Zenopus Archives has an article on a Dungeon! variant that was in the works that never saw the light of day. Adventure Modules were not much of a thing yet, so there were none from TSR at the time. Yet TSR showed a commitment to Tekumel, and then they didn't, and things faded away by the time the G-series and later the campaign worlds showed up.

It is an interesting part of history, and a good game as well. I'm not sure if this is the first "wizards' duel" sort of game, but it is one of the most involved and detailed. Someone could easily resurrect it, or create a version online (and it is sort of like Plants Vs. Zombies in its approach - things keep changing and staying the same).

Life in the Time of the Virus: Full Circle

A year ago, at the end of January, I was in New York City. I was recording lines for a game with an Emmy-winning actor, lines which will now never see the light of day. I had pizza in a crowded restaurant off Times Square. I had dinner with my niece and her husband at a nice place in Brooklyn. I walked down to the Strand bookstore. I bought a copy of William Gibson's book, but not from there. I flew back in a crowded plane.

A year ago, in February, I was planning to go to London. We were going to do a live event and meet with the European gaming press. As the reports of the coronavirus spread, the idea of travel to Europe became dicey. Some of the guests had already cancelled. I was in the "High Risk Group" that was already being intubated in overfull hospitals. I cancelled my attendance. The next day, the company cancelled the event.

A year ago, in March, we emptied the office. Everyone went home to work. I brought my laptop home and set myself up in the basement, on an old table from Milt's Wood Shed, in Wisconsin. We learned to handle the vagaries of on-line conferences. Having met most of my co-workers' dogs in the office, I now got to know their cats. In May we launched in the game. In June we pulled it back to Beta. In October we cancelled it outright. I moved onto another project.

It has been a year. I think is the last of these write-ups, because there is little more to be said. The world has changed and we have changed with it. I am comfortable with the fact that it will change further as we move along.

I am not vaccinated yet, nor is the Lovely Bride. By the priorities of our particular state, we are neither old enough, nor essential enough to do so. I'm good with that, but want to make sure that those who are old enough, or essential enough, or from large multi-generational families, are vaccinated. The roll-out has been rough, with anecdotes of insufficient stockpiles, broken freezers, sudden rushes, long lines, fools spoiling the vaccine, and other pains.

My mother, in her retirement community, has had her first-round vaccination, not because of the efforts of the village's managers, but because my younger sister and brother canvassed the area for a place where she could get the shot, and then took her there. She says everything about the procedure itself was well-ordered and efficient and not crowded at all. So there is some solace there.

In the outer world, the Lovely Bride has returned to working in her office every day. She is an Enrolled Agent, a professional tax preparer, and her works with an investment firm. Most of the investment agents are still working from home, and her office has a door. I am left with the cats, who demand attention regularly, usually when I am on a conference call. I leave the house for groceries and a weekly comics run. I play D&D and Call of Cthulhu over Discord with friends who I once sat around a living room with.

I am noticing a change in the news, in that I am suddenly hearing about things in other countries - protests in Russia, a coup in Myanmar, the repercussions of Brexit, a farmer's strike in India, and the United Arab Emirates have sent a spacecraft to Mars (wait, what?). It may because our own government is no longer sucking all the oxygen out of the room with their clownishness (and they could reduce it a bit more), or that we are waking up from a long self-imposed slumber to pay attention to the rest of the world.

Bu as a note to a future self, things are still more than a little tense. We have functional vaccines, but we also have variants and mutations of the disease itself, so the question remains of how long this will go on. But it feels like there is hope that will be an end to it, and though I don't want a return to "normalcy" (a cry of the Coolidge administration in the wake of war and plague), I do want stuff to settle down for a while. Boring. I could go with boring. Boring would be good.