The Model of Major Middle Manager 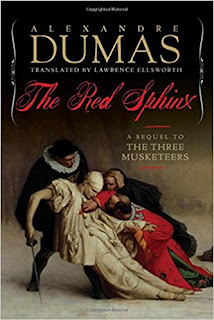 Provenance (Or how I came to read this book): I asked for this book as a gift from my Lovely Bride for our anniversary back in February, and she delivered, noting only in passing how massive (800 pages plus) the tome was. I had found out about it on Facebook, where I follow Lawrence Ellsworth. Actually, I follow Lawrence in his identity that gamers may recognize, Lawrence Schick. That would be Lawrence Schick the designer of White Plume Mountain and the current lead loremaster on Elder Scrolls Online. I don't know Lawrence all that well (his tenure and mine at old TSR did not overlap, and we have met maybe a handful of times), but I always liked his work and found the idea that he had translated a "lost" Dumas book was intriguing.

Review (Or what I thought about the entire thing): The book is an unfinished, partially published, manuscript from Dumas. Back in the day, Dumas serialized his stories in Parisian magazines. As a result, his completed books tend to be a bit... long and perhaps even ... rambling. This one in particular was titled The Comte De Moret, and was a bout a figure from the swashbuckling age who was the recognized bastard son of King Henri IV, and therefore half-brother to Louis XIII. Count De Moret was a historical figure, and was involved in one of the other royal brother's rebellions against the crown, and was supposedly killed in a battle against the Louis's forces. He has his own mythos that has grown up over the years, as the "good, loyal son" of Henri.

But in the book, as presented, De Moret is more of a supporting character, and Ellworth is completely within his rights to rename his translation after the true protagonist - Cardinal Richelieu. Yes, those who have seen numerous adaptations of The Three Musketeers think of Richelieu as the bad guy, the scheming spider in clerical red. But Dumas admires him, and presents him, not only sympathetically, but as the hero, the only man who cares about France, even if its king is a fool and his family are greedy intriguers.

Richelieu is, within this book, the perfect middle manager. His boss is a fool, but the Cardinal has gathered together a team of loyal, devoted, and talented individuals to make the entire country work. This is most dramatically shown in a section where, having lost a crucial argument with the Crown, Richelieu lays down his tools and retires to a private life, and the King attempts to do his job. In quick succession, every agent of the Cardinal lays out how dire the situation truly is, how everyone thinks the King is an idiot, and then resigns themselves. Less than a week after his resignation, the King implores Richelieu to return to govern the kingdom correctly. Richelieu is free with his favors, loyal to his workers, and has no fear about getting directly involved to get to the truth of the matter. The Cardinal could write his own business advice book and do a decent TED talk about management.

This is a 21st Cent translation of an 19th Cent book set in the 17th Century. And, though it has not seen much print in English, it feels very much like the shared-world adventure fiction I've read and written, and it makes the case that Dumas is very much an antecedent of popular fantasy as Tolkien or Howard.

To spoil just a bit, the book opens on a professional duelist (dueling is banned in France) who is approached by a hunchback to duel and kill the Count De Moret. De Moret has apparently stolen the affection of woman away from the hunchback. The professional refuses, because he knows the Count as a good man (though not above sleeping around) and the hunchback and his colleagues set upon the duelist with their swords and leave him for dead ( spoilers - he does not die). The hunchback and his colleagues then leave, but one of the colleagues reveals that HE is the one sleeping with object of the hunchback's affections, which results ANOTHER swordfight, in which the hunchback is badly wounded and feared to die (spoilers - he does not die, either). Both duelist and hunchback survive, only to have YET ANOTHER duel while they are both wounded and seated in sedan chairs on a street in Paris.

This entire exchange feels very Realmsian, and could have transpired on the streets of Suzail or Waterdeep. And the adventure fiction of the age can show strong connections with the shared worlds that TSR launched in the 80s and 90s. In this case, instead of a lore bible, the cornerstone of these tales come from the history and legend of France itself. If you are a fan of Ed Greenwood's work, yes, you should check out Dumas in a good translation.

The translation helps in all this. As opposed to a bowdlerized and simplified translation, Ellsworth embraces the passion of Dumas' language and subject, and creates a readable text. This reader freely will admit that there are sections where Dumas deals with history (from a Francophile view of course) that I put the book aside, but quickly returned as the action and plotting picking up again.

So the manuscript is unfinished - the magazine Dumas was serializing it in went under and he never got back to it. Ellsworth puts forth that he had an ending in mind from a short story he had written decades earlier about the count and Isabel, who he is in love with (despite dallying with others) in the earlier section. Set after the battle in which the Count had supposedly perished (Dumas played fast and loose with the truth), the two lovers are reunited by a carrier dove, and have numerous near misses before their relationship resolves.

I'm not so sure. I think Dumas was aimed at this as an eventual ending, but the two texts are dramatically different. The short story is completely epistolary (consisting of letters and diary entries), and the characters more passionate than shown at the start of their relationship/the end of the manuscript. The Cardinal is here in passing, wise and willingly fooled to help reunite the two. Dumas may have been aiming at the facts of the short story as his endpoint, but would have been involved in much revision should he have ever reached it.

In general, this is worth hunkering down and reading, particularly if you are a fan of the old Realms or DL novels. Swordplay, battles, plots, treachery, and the most effective middle manager that France has ever seen. Go read it.

And it is not so much of a "break" as it is a slow oozing over the line. Usually such news gets a lot more excitement, but most of the stock market news has been "three steps forward, two steps back:, while there hasn't been colossal collapses, but by the same time no fantastic rallies. It has been a slow progress. Even the news articles have been filled with "meh" and a warning eye towards its sluggish pace.

Part of that probably comes from the uncertainty in the rulerleadership of the States, but even there Wall Street has pretty much decided that what damage will be done can be limited to particular industries and short time frames. Business as an organism indicates that they adapt to situations if they are going to survive and thrive. And this does come under the current administration's watch, even if their primary contribution has been to not screw things up too quickly or two much.

In the meantime, we'll cast baleful eye upon the housing prices in this neighborhood, the challenges of abandoned trade agreements, and the ongoing retail apocalypse, and coast this pleasant trend upwards as far as it goes.

Email ThisBlogThis!Share to TwitterShare to FacebookShare to Pinterest
Labels: Economy

OK, it's been a week or so, and most of the results are pretty much settled (stuff still comes in, sometimes things are close, but pretty much the dust has settled). Here's what we got for Fall:

You'll note that I'm not highlighting the ones I recommended because a) it is not about my batting average, it is about getting good people into office, and b) I'm pretty bad at picking horses right now. Moving forward, I'm going to revisit all this when we get closer to the election day, but here are some guiding principles:

If you're an incumbent, what has happened on your watch to part of the discussion.
If you're say you hate politics, I am less inclined to make you a politician.
If you want to run government as a business, remember that that trick never works.
If you're a Republican, I'm giving you a particularly hard look. All these positions are non-political, so it is inevitable that I will recommend a Republican, either not knowing any better, or the fact that we actually have some competent Republicans out here. But you're starting at a disadvantage.

And that is it until the next ballot shows up. More later,