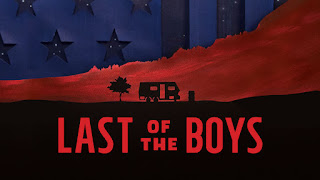 You know you're in trouble when you start doing math while watching a play. You start off thinking - you know, it these guys served in 'Nam, they'd be in their late sixties now, if not older. OK, hang on, the young woman is 35, and she never met her father, who went missing in '67, so I guess we're looking at the play being set in 2002 or so....

Yeah, when you get distracted like that, the center is not really holding, and that's the problem of Last of the Boys. The play is getting portrayed in adverts on KING-Classic radio as being a play of male friendship, but it's really about 'Nam, and how as a national and personal event overwhelmed everyone in its path.

Everyone in the cast is a casualty of the war. Ben (Reginald Andre Jackson) and Jeeter (Kevin Anderson) are vets, their friendship forged in the crucible of Southeast Asia, so that now, thirty-five years later (we figured), Jeeter stops in (from his life of teaching Sixties studies and following the Stones on tour) to visit Ben, who has a trailer on an old superfund site in Northern California. Their friendship is by turns relaxed and prickly, built on things that they cannot and will not talk about. This time Jeeter brings Salyer (Emily Chisholm) , his younger girlfriend (who lost her father to the war). Salyer is followed by her mom, Lorraine (Kate Wisniewski), who didn't even tell Salyer's father she was pregnant when he shipped out. And Ben is literally haunted by the spirit of the war itself (Josh Kenji), as Ben casts himself as Robert McNamara and gives press briefings standing at his ironing board to defend the war.

And conversations occur. Secrets are revealed. There's a lot of chatter and grand statements. But it doesn't seem to go much of anywhere. There's no real rise of tension - just incidents and accidents. An intermission occurs, it seems, just because you can't go on for over two hours without one, not because there is any dramatic need. But the play seems to circle the central subject, much like conversations among men, but doesn't get as much to the meat of the situation.

The actors are all fine. The set design captures the flavor of Northern California in the Central Valley. The Lovely Bride's sister and her husband live in Corning, and we've spent our time when visiting sitting on their broad porch overlooking the valley beneath (and watching for wild fires).

But the play feels like it is being sold under false pretenses, and does not live up to its supposed goal. I just don't buy that Ben and Jeeeter are still friends after all these years, in particular when we finally understand Jeeter's connection to Ben's father.Are they friends simply out of habit? Out of the fact that there's nobody else left to share, but not talk about, their experiences?

And here's the thing that bothered the Lovely Bride - Ben and Jeeter kept throwing their empties into a dumpster. California gives you a five cents rebate on your glass - you don't toss them. Yeah, and that's the problem - you get easily distracted because there isn't much to hold you to the center. And I spent some time figuring out where this was set, an hour and half outside Modesto. You go north, that's Sacramento, you go south, that's Fresno, West takes you into the Bay area, so maybe we're talking around Sonora?  Again, this is stuff I should not be thinking about when the actors are still on the stage.

As for 'Nam itself, I missed the bulk of it, and I am no young man anymore. The war was already well in progress when I first started paying attention, with older (male) cousins going into the services and talking about draft numbers. And by the time I had to worry about the draft, we were gone from there, with our helicopter taking off from the embassy (You know what worked better on the stage? Viet Gone. And I didn't mentally math-check that show). But for Viet Nam itself,  I missed that particular horrific bonding moment, and Last of the Boys doesn't really fill in much of the blanks.

Actually, this happened a while back, but I've been busy. Suffice to say that after a horrible, horrible December, the ship of industry righted itself and returned to is normal course. Which, in these besotted times, is various degrees of upwards. Right now it is hovering in the mid-24ks, with the occasional wide swing upwards or downwards which quickly is discounted as because of particular good or bad news - trying to fit the facts to the narrative.

What is interesting is what is happening that is NOT having much affect on this market. Supposedly the stock market is sensitive enough to pitch itself off a cliff over a single event, a rumor of change, or a rogue tweet. Yet over the past few weeks, the DOW has been amazingly stolid in the face of such things as:
- The Federal Government shutting down for thirty-five days. This was an make-no-bones-about-it lockout. with people furloughed and those who were deemed invaluable forced to work without paychecks. Didn't seem to hurt the market.
-   The House has put some honest-to-goodness progressives on major committees that have the teeth to investigate the shenanigans in our economic sector. Yet that did not offend the markets.
-   The British Government failing to make good on its suicide pact to Brexit the rest of Europe, having not plan B, but leaving the same bunch in charge that failed to come up with first plan. This is globally huge, but didn't seem to hurt the market.
-  Ongoing trade war with China, which has cut off a number of its US Imports,, while we've chosen to make it more expensive to buy theirs. Not only hasn't hurt the market, but the fairy-whisper thin rumor that things may get better drives it upwards.
-  Continuing evidence and indictments on the Executive Branch which pretty much confirms the venal, illegal, and probably traitorous nature of an entire administration. Doesn't hurt the market, such that the dude is the White House tweets out that actually finding him guilty of his crimes WOULD hurt the market.

Yet these things have not had much effect on the markets, which seem to indicate that they are even more disconnected from not only the national scene, but from the world itself. And this will last until they make another "correction", which the buzzword for a sudden plunge, at which point the wise heads will point some piece of economic minutia, like the Fed Chairman not ruling out a rate hike over a lunch date, as a reason for the sudden tailspin.