This is the one that has kicked up all sorts of dust. In an industry where bumping off Superman is a semi-regular feature, the reveal at the end of this one has caused massive internet rage. Which is a pity, because it is a very well-written book.

I've been a Marvel fan for many years, though I will freely admit that there are entire wings of the company I don't pay much attention to. I fell out with Peter Parker when they diabolically annulled his marriage to Mary Jane, and lost touch with the X-Men when it seemed like there were just too many of them. But Cap's pretty much been along for the entire ride since college, even including some of the stranger eras. Captain America is a favorite character, but I recognize that one of the reasons is that he is continually challenged, and rise up against those challenges.

Here's the spoilerful summary. If you don't want spoilers, look away! 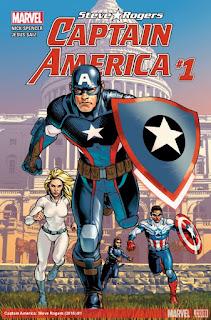 We start in a flashback - 1926, where Steve Roger's mom is being slapped around by her abusive husband. Mom and Steve are rescued by a woman with a kind heart and impressive martial arts skills. In the present Captain America fights a bunch of Hydra thugs on a runaway train. Driving the train is a young man who, like Steve, comes from an abusive home, but he ended up in crime, and eventually was recruited by the Red Skull. Cap stops the train, but the young man says "Hail Hydra" and blows himself up anyway. Then, along with two small-time patriotic heroes, Jack Flag and Free Spirit, Cap goes after Baron Zemo to rescue a scientist. Baron Zemo is defeated by Cap and Jack Flag, but Cap is unhappy Jack is there to help. We bounce back to 1926 one more time, where the mysterious guardian angel reveals she works for Hydra, and recruits young Steve Rogers into their ranks. Back in the present, Cap pushes Jack Flag out of the aircraft to his supposed death, then utters in the final panel "Hail Hydra."

So, has Captain America, symbol of liberty, always been a bad guy! Hydra has been taking it on the chin for years, solely to put Captain America in the deepest of deep cover! It is amazing! Exasperating!  Maddening!

And what really is maddening is that this is a very well-written and well-presented book. It moves smoothly, has a lot of character moments, and feels firmly grounded in the Marvel Universe. Parts of the subplot involve a recent pan-company team-up involving the Cosmic Cube (which, um, changes reality, so that may be a hint to what's going on) and also drenches itself deeply with Captain America lore (including the fact that minor hero Jack Flag had been a member of the Guardians of the Galaxy). Also, comparing the situation of young Steve Rogers and the Hydra suicide train driver strengthens the main character, so the final reveal doesn't drop totally out of the blue.

The book is extremely texturally dense. We get a full-page rally speech by the Red Skull that you could actually see someone buying into. A two-page Maria Hill/Sharon Carter debate that frames the challenge of SHIELD in the modern world while passing the Bechtel test. Breakroom camaraderie between Flagg, Spirit, and Rick (Everyone's sidekick) Jones. Even a flippant, almost comic, Baron Zemo, who comes across as playing by an outdated rulebook.

The art is excellent as well. The flashbacks are duotintes in shadows and bright red. There are a huge number of characters in book, and they all have their own feel and personalities. The moment-frozen combat with the Hydra thugs is impressive. Great art here.

And I think that's one reason that people are upset by all this. Spencer and Saiz sells the idea that Cap is a traitor perfectly. They set it up how someone can go over to the dark side, show the moral qualms with dealing with superheroes, and they deliver that final punch. If it was less well-done, there would not have been so much anger and so many pixels spilled on Facebook.

Hydra have become Nazi-analogs for our fictional world. And while they first showed up inspired more by Dr. No than the Third Reich, they were founded/controlled by a bunch of former Nazis like Baron Strucker, so, yeah, close enough to army work.  But what Hydra hasn't had previously has been much of a pre-WWII heritage. Yet here they are in 1926 running the equivalent of the German American Bund. And from some the guardian angel's comments about how Steve will someday be remarkable, I smell time travel. For a story that really did its homework, the timeshifted Hydra is odd.

The other weirdness is the Red Skull in the basement. The Red Skull is currently one of the most powerful telepaths on earth, having had the brain of Professor X surgically implanted in his skull (don't ask. just ... don't). Yet he's running a rally in some basement? OK, that's weird, but so was Kingpin running a Las Vegas gang for the Red Skull, and that's canon as well.

Now, this may all go away next issue, comics being what they are. But Marvel has been resisting that particular reset button trope of late. They brought the original young X-Men into the present, and everyone assumed they would send them back. They haven't. By the same token, they did an entire universe reset recently where some things changed (Tony Stark was a bad guy, Kitty Pryde became a cosmic became being. Everyone knows that Matt Murdock was Daredevil - none of those things are true anymore). but others did not (Sabertooth is a good guy, Iceman is gay). What this gets as a result is a sense of uncertainty among the fans - How long is this Hydracap going to go on?

Its a good book in that it raises the stakes to an incredible degree. and does it effectively, hitting readers so emotionally that they have have had an amazing reaction, even if that reaction is anger. Now, comic book universes (and Marvel in particular) have been good at setting things like this up, but lousy at resolving them. So I really want to see how they (and Cap) work their way out of this one.

[UPDATE: So, issue #2 showed up, and the winner is ... Cosmic Cube Mind Control! Cap hasn't been a Hydra agent all these years - he just THINKS he's been a Hydra Agent all these years (and given the damage he's done to Hydra, that must mean he's the WORST HYDRA AGENT EVER). The title of the second issue should be "How I Did It by R. Skull" and consists of an involved tale of how Mr. Skull befriended a small child who was really a cosmic cube and convinced her the right thing to do to help people was to make them Hydra agents ('cause Hydra is cool!). The issue also declares the recent SHIELD attempt to mind control bad guys and turn them into the road cast of the Music Man (Another horrible idea) was also part of the plot.

OK, it's not time travel, and it is a pity when fandom's ideas of what happened are cooler than what turned out. Still doesn't explain fully why the Red S, who has the mental powers of Professor X, is mucking about with such a convoluted plot against Captain America when he has, well, the brain of Professor X at his disposal. They sort of put a lampshade on this in the text, with a couple characters asking, a la Scott Evil, Why Don't You Just Shoot Him? So, like the Red Skull in the basement, it is still weird.

As mind control, I wonder if they are going to get into the cognitive dissonence that Cap will face where his past actions don't line up with his current mindset (Punch Hitler? Why would I ever punch Hitler?). On the other hand, if Cap remains a pillar of virtue, wouldn't there be a threat that he would turn Hydra into a voter registration and daycare center? That he would not take over the organization and use its resources to help the flood-ravaged counties of West Virginia? I don't know if he would do either, but if he does, you read it here first.]