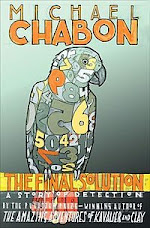 The Final Solution, A Story of Detection by Michael Chabon. HarperCollins 2004

Provenance: From the collection of John (Sacnoth) Rateliff. John notes within the book when and where he purchased the book, and when he read it. IN this case, it was purchased from Borders' Books on February 5 on 2005 and finished the next day, when it was raining..

Review: Short novel, but for me it proved to be a long read.

I think this slender book can be entered as evidence into the argument of the difference between Literary Fiction and Popular Fiction. Chabon has set up his shop in this borderland, with tales that sound like Genre Fiction. The Yiddish Policeman's Union is Alt-World SF, Gentlemen of the Road is Historical Fantasy, Yet I won't dare to say he elevates the genre so much as applies Literary Fiction techniques to what might otherwise be popular fare.

Here the story is a Sherlock Holmes story. Holmes is never identified as anything other than the old man or the detective, retired and tending to his bees. It is in the heart of WWII and the ancient detective comes up on a young boy, a mute refugee from Europe, who has a grey parrot. The parrot recites numbers in German. No one knows what the numbers mean, but it could be important, which in turn kicks off a number of other things, including the theft of said parrot and a murder.

Chabon's style is ... ornate, bordering on baroque in places - thickly layered and crossing back on itself, so I am often reading a single paragraph as second or third time to figure out what I missed. His pacing, as in Gentlemen of the Road, is a stone skipped across a lake surface - each chapter involves a direct change of scene, time, and often narrator, and it takes a while for the mental gears to catch and the reader to understand what it going on.

From the genre side, the author plays fair with the reader - the clues are presented in a fashion that when the reveal is made, it does note require knowledge the characters might know but was denied to the reader. From the literary side, the tale is much more about in interior lives of the characters - the detective, the police, the inhabitants of the house where the young mute boy resides, even the parrot itself Even the curiosity of the the parrot is not revealed to the characters inhabiting the book, but the reader is rewarded with a hint of what is truly going on. Holmes does not solve that particular mystery, but it is not one he is charged with solving.

The illustrations, by Jay Ryan, are good, weaving the text itself into the art. I've noticed this with a number of short books - is interior art a value-added for such short volumes, to make up for the lake of tonnage in the page count itself?

It does occur to me that I have been more successful listening to Chabon's books on audio than actually reading them. The text does flow if read by someone who knows what is going on, though I still need to back up occaisionally in case my mind wanders and I miss something.