Plague Books: A Pirate's Life For Me 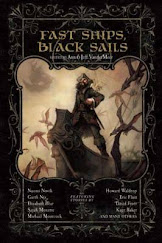 Provenance: NorthWestCon. Gotta be NorthWestCon. Night Shade had a table in the Dealer's Room that year, one of the few publishers that did. It has been a source of trade-paperback-sized volumes in my library over the years.

Review: I have a soft spot for the Age of Fighting Sail. It shows in Spelljammer. It shows in the world I pitched that never was. And It shows in a short story I wrote for Oceans of Magic. I've read/listened to the Aubrey/Maturin books by Patrick O'Brian, but never really got any traction with Hornblower or the Bolitho series. So Pirates? An easy sale for me.

One of the challenges in a pirate story, or any story in the Age of Fighting Sail, is that the sailing ship is the most complex machine of its age. Naval architecture was precise and unforgiving, and the the operating system consisted of the living crew who had to operate in co-ordination to keep things from going hull-sided up. Even operating a ship was a challenge and a craft, much less fighting to the death with another of these complex battle-wagons.

And there is the romance of the sea, of foreign lands, and of the promise of treasure and riches for those who who can bear up, and are fortunate. The 18 stories here range from pure fantasy to alternate histories to horror in tone, and most of them are pretty good. The best from my opinion was "Araminta, Or, The Wreck of the Amphidrake" by Naomi Novik, but a lot of the tales take on a distaff view of the historically (though not exclusively) male-dominated profession of piracy. A couple of the tales, did feel like the background music was "Brandi, you're a fine girl". Kate Sparrow's "Pirate Solutions" features hackers with historical and mystical piratical connections, with nods to Anne Bonny and Mary Read. Howard Waldrop and Michael Moorcock are here with name recognition, though Waldrop's is a mashup of Gilbert and Sullivan with Peter Pan, while Moorcock's contribution is a vignette, at best. Elizabeth Bear/Sarah Monette roll out a Cthuloid space tale with "Boojum", and Paul Batteiger does a nifty bit of worldbuilding with an ice-bound world in "Cold Day in Hell" which smacks of a Patrick O'Brien tale (on skates).

The only story that left me cold was Steve Aylett's "Voyage of the Iguana", which seeks to take the terminology and jargon of the old salts and make it completely impregnable. I think it was humor, but the shot was wide and failed to take down any rigging. Rhys Hughes drops a shaggy dog story in "Castor on Troubled Waters", but that was forgivable. All in all, a good collection, nicely paced and well-put-together.

And it has just a hint of spray of sea salt on it.