Plague Book: Money for Nothing 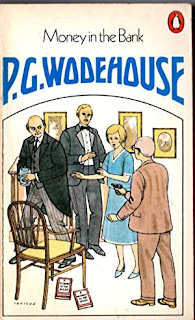 Provenance: This is from the collection of John Rateliff, purchased from Skoob Books (Secondhand Books for Students), 66 The Brunswick off Marchmont Street in London (near the Russel Square Tube), on the 9th of December, 2012. I know this because John used not only the receipt as a bookmark, but also a coupon from the store (20% off for students, expired 31 October) and a tag from a Twining's tea bag as well. About the most British set of bookmarks I could imagine, short of the Queen herself holding a finger in the page where you've left off.

For my part, I was reading SPQR in early November, and the stories of mobs throwing rocks down on the Senators sort of convinced me I should read something else for a while. I am a Wodehouse fan, though my participation has a lot of glaring gaps in it (Code of the Woosters remains the best). So, I pulled this one out for something, well, lighter.

The Review: I have seen the quote in several places, attributed to a number of individuals, that Wodehouse wrote just one story for 75 years. That is a bit unfair, in that it his plots are always convoluted pieces of machinery, and his prose is spritely and engaging. But even I will admit that his component parts are often the same - vapid young men, headstrong ingenues, dotty relatives, English manor houses, class discrepancies, hare-brained schemes, and ultimate comeuppances.

Here's the scoop on this one: Jeff Miller is a very inept novice solicitor who is engaged to a headstrong young woman, and longs to escape both situations. Through a series of daffy and unlikely events, he is hired as a detective at an English manor house that is being rented by a famous female African Explorer, hired to investigate the manor's butler. Said butler is actually the owner of the manor house who has hid a treasure .... somewhere on the grounds - he forgets were, and his daughter (also headstrong, but one of the sane ones in the book) is currently working as the female African Explorer's personal secretary, and is the one who engaged Jeff Miller to follow her father around and find out what he is up to. Which she really doesn't want him to do. Add the real detective and two petty crooks and, yeah, it a Wodehouse romp with all the bells and whistles.

Wodehouse has his troupe of types and character actors, like the old commedia del'arte. His male lead is hapless (Jeff Miller's superpower is to make small talk, which he uses to get himself out of numerous jams). His women are made of sterner stuff, ranging the dangerously overbearing (the female African Explorer) to the dynamically resourceful (the daughter whose family owns the manor). His male figures tend to be made of much milder stuff, ranging from the forgetful father/butler, to the original detective, (who has a tendency to hide in closets when threatened) to the female African Explorer's milquetoast and doting admirer. There is much in the way of confrontations and conversations in various rooms in the manor as the characters bump into each other and then pinball their way into other confrontations and conversations in other rooms. Wodehouse's style is perfect in this, much like his protagonist, his superpower is chat, bringing the reader along with involved, perfect sentences that you would hate to interrupt.

The interesting thing about this book is that it was written when Wodehouse was the guest of the Wehrmacht, as an internee during the war. Wodehouse and his wife had decamped for the South of France for tax reasons, and while they made a few half-hearted attempts to get out of town before the Germans arrived, they ultimately were interned as foreign nationals, and Wodehouse imprisoned is various locations. The idea that Wodehouse could write a book, and get it published in America in the middle of all this is a bit amazing. There is not a hint within the pages of the war, or of much of anything else outside the characters' immediate surroundings. His characters are self-absorbed to the point of immunity.

Wodehouse himself during this period did some radio broadcasts for the Germans. While they seem to have been very much the "Stiff Upper Lip British We Are All Making Do In These Difficult Times", appearing on behalf of the Germans was not the wisest course of action. It was labeled propaganda, he was pilloried as a traitor, and Wodehouse got, for lack of a better term, JaneFonda-ed, where any mention of his name in England for the next thirty years would cause Someone to trot out the charges. Finally, in 1974 all was forgiven and he was given the KBE, though Wodehouse passed on before the knighthood ceremony.

Wodehouse never returned to the England he left in 1930. His fantasy world remains timeless in part because of it - trapped like a fly in apsic between the wars. His manor houses have evaporated over the years, but his prose keeps them shining bright in memory.