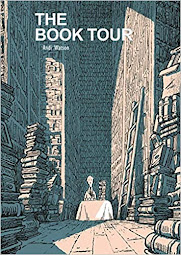 Provenance: Lent to my by Stan!

Review: Fretwell is an author on that most burdensome of writer's tasks, the Book Tour. He goes from store to store on a fruitless quest to make personal appearances (that no one cares about), meet his public (who don't show up), and sell his books (which do not sell). The suitcase containing his books have been stolen, his publisher is ghosting him, and his wife is nothing more than a distant voice on the telephone.

The Book Tour is a graphic novel by Andi Watson which moves leisurely through its absurd urban landscape. Watson's style is quiet, and his dialogue short and filled with assumptions on both parties' parts. Fretwell wanders through an ornate, deeply illustrated city filled with self-involved, minimalist characters, most of whom are so wrapped up with their own lives to the point that Fretwell does not register, much less matter. And Fretwell himself takes it all without losing his cool or pressing his own advantage.

Fretwell's hell is Kafkaesque. I got that feeling from the very name of his doomed book - "Without K", as K was the last name of victim in Kafka's "The Trial". And like The Trial, Fretwell comes under suspicion of a crime he did not commit, and confronts a universe that is not maliciously uncaring in a Lovecraftian sense, but uncaring in its own right.

Stan! tells me he took his time with the book, and I can see why - in addition to being an author, Stan! is a cartoonist, and the pacing of the story as Fretwell moves from encounter to encounter is excellent, his characters frustratingly obtuse, and his city is both malignant and detailed. I on the other hand, moved through it slowly because it raised a lot of my dark ghosts of my own previous book appearances, ranging from the ones where no one showed up, to those where we violated some local idiosyncrasy, to those when we were literally in the shadow of better-known authors (as in, right beneath a banner that says "Meet Tom Clancy!". Every writer has those experiences - buy me a beer and I'll bend your ear, but this book unearthed them in all their undead glory.

But back to the book. Watson's universe is uncaring, but not in a malicious way, but rather just self-absorbed. Fretwell is a irritant to the inhabitants of that world, and his relentless desire to push on through his adversities (which quickly pile up) forms the hub of the story. I think I know who the serial killer is, or at least, who I want the serial killer to be.

In the end, this a post-war British black comedy, something produced by Ealing Studios with Alec Guiness as Fretwell, directed by that young Hitchcock fellow who had already left for Hollywood. And that's a movie I would be glad to see.