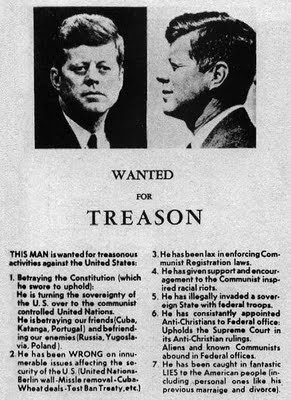 Forty-Six Years ago, President Kennedy was shot in Dallas.

I first encountered the above document, I think, in William Manchester's The Glory and the Dream, which was a history of the "swing generation", from 1932 to 1972. Excellent book, and it was the first time I read about the Bonus Army and the Wanna Go Home riots.

In any event, Manchester was making the point that in the wake of Kennedy's assassination, there was a great national forgetting that anyone hated or even disliked the man in the first place. He offers the anecdote that more people claimed to have voted for Kennedy after his killing than actually voted in the 1960 election (though it was probably, to be more accurate, a higher percentage of the polled population claimed to have voted and voted for JFK).

In any event, this document was offered up as being distributed on the streets of Dallas the week of the shooting (though not by Oswald - he was more of a "Fair Play for Cuba" kinda guy). But embiggen it and read the charges, and you may get a whiff of the modern age and how things have not changed.

Main Header: Accusing the President of the United States for Treason? Well, let's see what the logic is:

Item 1: Betraying the constitution (restating the main point) by turning the US over to the communist-controlled United Nations: Yes, the UN and its world government has been a cornerstone of conservative protest for decades, even by this point. At almost 65 years, it has been the slowest takeover ever. Anti-immigrant and isolationist tendencies have coalesced over the years into an abiding distrust of the UN and anything UN based

Also Item 1: Betraying our friends (Cuba, Katanga, and Portugal). By Cuba they mean the Batista regime in Cuba, which was booted out in 1959 by the Castro regime. JFK oversaw the Bay of Pigs debacle, in which US-supported exiles invaded the country, expecting the local population to rise up in support, which they failed to do.

Katanga was a a breakaway province (1960) from the Democratic Republic of the Congo, which itself had just gained its independence from Belgium. Katangan independence had the support of Belgium business interests, but was opposed by member states of the UN (There it is again), and the province was forcibly reintegrated.

Portugal I had to do some digging before I came up with Gao, a Portuguese colony on the west coast of India. In 1961 India captured Gao, and while the administration condemned the action, it did not reduce foreign aid to India.

Yeah, its a little nuanced. Its also the last time anyone on the right really talked about Katanga OR Portugal.

Also also Item 1 (OK, its not well organized - its a pamphlet): Befriending our enemies (Russia, Yugoslavia, Poland). Because if you're not actively hitting them, you're befriending them. No idea why Poland is on the list, other than that it was one of the more moderate (though still oppressive) communist governments of the time. And as for Yugoslavia, under strongman Tito its Marxism was more Groucho than Karl.

Item 2: Being WRONG on numerous issues. Of course, being wrong is treason in itself (um, no its not). And the litany of incorrect issues reads as - if something occurred near JFK's watch, it is his personal responsibility, and is by its very nature wrong. We're looking at a laundry list of woes.

Item 3: Lanessx in enforcing Communist Registration laws. Communistic Registration Laws, both local and federal, required communists to register with the government, for the good of public safety. Replace "Communist" with "Muslim" and you have a familiar level of hysteria. Of course, JFK may well have been lax, since Ike negated the laws with the Communist Control Act of 1954, which just outlawed the Communist party entirely (which, by the way, didn't really take, either).

Item 4: Support and encouragement to Communist inspired racial riots. Another piece of right-wing gospel - the racial upheavals of the sixties were the result of foreign-sponsored agitators taking their orders from Moscow.

Item 5: Illegally invaded a sovereign state with Federal Troops. Sounds serious? We're talking about enforcing desegregation in Mississippi and Alabama in 1963, while scrupulously ignoring Eisenhower doing the same thing earlier in Little Rock. Interesting how the bells of state sovereignty peel out whenever someone you don't like is in charge.

Item 7: Caught in fantastic LIES (not just lies, but Fantastic LIES), and gives the example of JFK's Secret Wife. Yes, this is the Birth Certificate uproar set in another time and place. The woman in question, Durie Malcolm Appleton, was supposedly married to JFK sometime in the late thirties or forties, and while annulled, never divorced in a civil court, making JFK a bigamist! Ahah! And even if he had been divorced (and Joe Kennedy had destroyed all documentation, the crafty old man), the US should never have a divorced man as its Commander-in-Chief (until, of course, Reagan, but that was completely different).

Now, with all of the above, there is the frisson of recognition here. The strong rhetorical similarities between the birchers and the birthers, and the level of anger and raw hatred that bubbled up at the time for the first Catholic president of the US. And more importantly, a level of rage and indignation that seems awfully familiar to that of the past, and while the particulars change, the methodology remains.

History does not necessarily repeat, as make Twain noted, it sometimes rhymes.