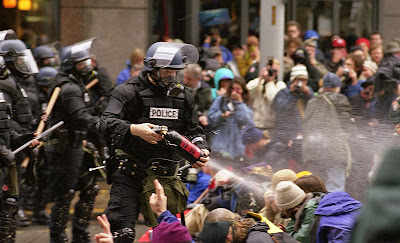 Ten years ago, the Lovely Bride and I were at SeaTac, newly returned from a Thanksgiving vacation. We had heard there were incidents at the World Trade Organization meeting in Seattle. The first day had gone big and gone well, but now things were getting dicey. Rumors of tear gas and dumpsters on fire.

"Honey," I said, "Can I go downtown and fight the man?"
"No dear," said the Lovely Bride, "We still have to get our luggage".

Ten years ago there were massive peaceful protests and there were vandals. There were sympathetic officers and there was a police riot. There were friends tear-gassed in their homes and an armored "Peace-Keeper" rolling through Capitol Hill.

And where did we learn in ten years? One one hand, more people keep saying how the protesters were right, and that more enviro and labor voices are being heard at the table. And on the other hand that such protests have become passe in the after-Eleven world where public dissent is condemned and villified. And on the third hand, how things haven't really changed at all. It is just that you don't see them unless you go looking.