Only I could go to a comic book convention and end up at a parade. And the thing is, most people aren't surprised by this. 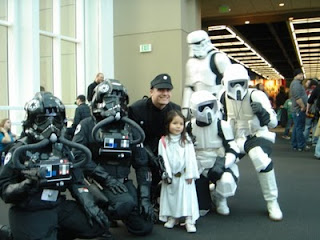 The Emerald City comic convention was this weekend, and, as for all other ECCCs to date, continued to bust the doors down on attendance, such that I'm going to have to start showing up on Sunday if I'm going to actually get to buy any comics. The ticketing problems of last year were more than readily solved by the convention team, but for most of the day the halls were gridlocked by masses of slow-moving fans and non-moving lines. Next year, I think they should go after the guys with the huge backpacks that move with all the grace of trailer truck carrying a house.

But it all went very well, and I touched base with a lot of people that ranged from "I saw them on Friday" to "I saw them LAST Emerald City Comics Convention", and there were a lot of hall costumes slowing things down as well, but at least they were entertaining (favorite - a little girl as Princess Leia, who was posing with some accurate Imperial Storm Troopers).

But I got my badge and walked down to the Pike Place market to pick some fresh bread and cheese for the Lovely Bride, and on my way back I was blocked by a parade that wasn't there before. 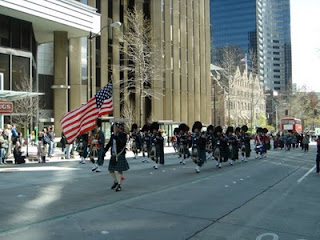 A St. Patrick's Day parade. And of course, I stayed to watch, since I part Irish. Well, Black Irish. Well, Black Forest Irish. But hey, it was a parade, which served the purpose of putting all the bagpiper players in Oregon, Washington, and British Columbia together in one spot for an afternoon. And to the rest of Oregon,, Washington, and British Columbia, all I have to say is ... you're welcome.

Actually, the pipers were excellent, and there were other representatives of the Irish culture - wolfhounds, dancers, and DeLoreans, the last driven with gull-wing doors extended. And such regular trusted features as the Seattle Seafair Pirates, atop their chosen vehicle, Moby Duck. And the loudest group was, not surprisingly, the Seattle Sounder fans who brought up the rear. And they were competing with Seahawk fans (yeah, they had their own marching group).

Oh, and only Seattle would force a unicycle squad to maneuver uphill. They were cool, too.

It was nice, and the pirate cannon prepared me for the return to the convention. And afterward ArenaNet hosted a small meet-and-greet at The Elephant and the Crown. Sorry if you didn't make it.

So its a long day, and my feet are throbbing from the walk. But another strange day in downtown Seattle. You'd think I'd get used to it by now.