The Revolutionists by Lauren Gunderson, Directed by Kelly Kitchens, Arts West, through 9 February 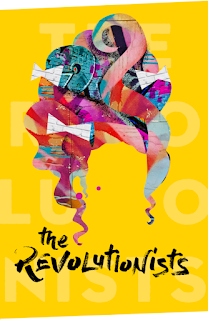 Olympe de Gouges is a playwright in Revolutionary Paris of 1793. She is visited by Marianne Anglie is a free black woman woman from the San Domingo. She wants Olympe to write pamphlets to help the revolution there. Charolette Corday arrives, an assassin in waiting. She wants Olympe to give her some final words to say after she kills the Jacobin revolutionary Murat. Then Marie-Antoinette shows up looking for a rewrite on her role in history. But Olympe has writer's block.

And there is a fifth woman here, and she is Madame Guillotine. The Terror is in full swing, reaching that tipping point to where anyone, anywhere, could feel her cold sharp kiss. And for women the danger is particularly high.

So, its a comedy. Kind of. The women argue. They joke. They try to help Olympe. They make demands. And for the bulk of the play, it all feels pretty off-balance. The characters feel like they are talking through each other as opposed to each other. the language is modern and so is the cursing. They talk like they know they are characters in a play. And I can't really pin down what this is - Historical? Alt-historical? Meta-theatre? Are these characters or ideals in conflict? Am I entirely inside someone's head? If so, who?

The actors are good. Sunam Ellis  is Olympe de Gouges, a bit too flighty and vain for my tastes, but that's how I feel about writers in plays. Jonelle Jordan is Charolette Corday, the emotional one, and her emotion is murder (She was in Bo-Nita, at the Rep, and can carry herself well on stage).. Hannah Mootz is Marie-Antoinette, the ditsy one that can come up with inadvertent truths. Dedra D. Woods is Marianne Anglie,. who of the four is the voice of reason. Yes, they could have stepped out of a mid-eighties sitcom, and the oddball relationship kinda work most of the time.

Because in the last 15 minutes, all became clear. All the chatter before is set-up, as they pay off all the odd quartet and characters and resolve everything in something that is really moving and aspiring. When you get it, you get it, and understand why everything feels so disjointed. And you feel sorry for those people who bailed early. Still, it is a bit of chug for a while.I found it ultimately OK, but the journey took a while.

Now, the Honesty In Relationships Act of 1962 demands that I note that this point that the Lovely Bride disagrees with me on this. She thought it was great. She liked the actors, the plot and how it all fit together. She laughed, she cried, she internalized. So this one comes with a healthy and hearty "Your mileage may vary". I gave it a good, solid B. She gave it an A. Go find out for yourself. Don't leave at intermission.