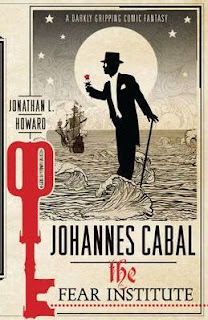 Provenance: A friend lent me the audio version of Johannes Cabal and the Blustery Day, a collection of short stories featuring a particularly sardonic,erudite, and irritated necromancer who keeps having things get in the way of his quest for eternal life. They were fun, and when I was in New York last year I picked up a copy of The Fear Institute at the Strand (a highly-recommended bookstore, but I will give the edge to Powell's in Portland).

Review: What attracted me to this particular book (as opposed to others in the series) was the fact it was set in Lovecraft's Dreamlands. The Dreamlands were mostly part of Lovecraft's work in poetry, where he is influenced by Lord Dunsany, and is the more fantastic setting of his mythos. A lot of the same players and characters fit in, but it the Dreamlands are more aesthetic than horrific, which causes some interesting interplay between his view of this world and the land of Dreams.

Other authors have played in this space, so it is interesting to see how this other Howard takes it on.

And it's all right. The writing is solid and engaging, and has the proper level of bounce and snap. But I think I like the other authors' take on Lovecraft's fantasy world better. This adventure really doesn't need to be in the Dreamlands, and could be in Oz or the Forgotten Realms save for a couple solid name-checks. Cabal's sardonic commentary applies to fantasy worlds in general as opposed to prying up the underlying nature of Lovecraft's universe. There is a dualogy between Lovecraft's worlds - his Dreamlands tend to more romantic, awe-inspired, and positive, while his mythos works set in our world tend to be more horrific, nihilistic, and terrible. Both settings have living gods, but those gods are more active in the Dreamlands and the characters who toil in their shadows more empowered.

Anyway, the plot. Cabal is hired by a trio of individuals who intend to go to the Dreamlands and defeat Fear, Fear being the worst bane of human civilization. Despite himself, Cabal goes along as the official guide. There are adventures with Zoogs and Men of Leng, and I think he really nails the Men of Leng for the first time that I've read. The amusingly selfish Cabal verges on being heroic because of the nature of the universe he is cast in. Elder gods are confronted. Time paradoxes are invoked. It wraps up with a strong lead into the NEXT volume.

It's OK. Cabal as reluctant hero gets him away from him from merely whining about his state, and reasons are given as things progress. But I don't get the feel of the Dreamlands from this tome in the same fashion as I did the other versions. Howard doesn't add to the mythos (again, with the exception of the Men of Leng), but instead it functions as a mostly-understood backdrop for Cabal's ongoing frustrations with reality, both his own and that of alternate planes.

Its worth a read, and in the proper hands, would be good series on NetFlix. But it remains OK.