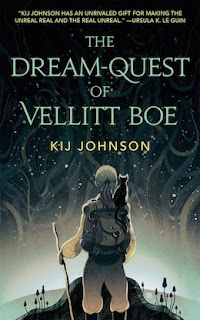 The Dream-Quest of Vellitt Boe by Kij Johnson, TOR Books, 2016

Provenance: Kij Johnson was a colleague at Wizards of the Coast and one of the ringleaders of a writer's group I belonged to (The Thousand Monkeys) more than a decade ago. I saw mention of the novella on the book of Face and the Lovely Bride ordered it from Amazon as a Christmas present. I am glad I got it in hard copy so I may press it upon friends to read it as well.

I have spoken of Lovecraft before. I love his cosmic vision, enjoy his prose, tolerate his poetry, and detest his racism. But I have also said that it is the nature of creation to have other creators arrive and develop, add, and subtract. That is what Kij Johnson has done here, to amazing effect.

Vellit Boe is a professor at the Ulthar Women's College in the Dreamlands. One of her students, Clarie Jurat, the daughter of a major supporter, has run off with a man from the Waking World, a dreamer, Vellit Boe must find Clarie and convince her to return before her father finds out. That sets Vellit off on a mission that leads from the stairs to the Waking World to the court of King Randolph Carter to the ghoul warrens below, as the situation becomes more dire with every step.

And it works. Vellit Boe's dreamlands is a "real" world with its shapechanging sky, few stars, monstrous inhabitants, capricious gods and questionable geography. It is a dreamworld with a grounded sense, a trust in its own mutability.  It has its own rules - they are just unlike ours, and change at a whim.

It is a world with its own gender issues - this is the Dreamlands shown from a female perspective. It does not negate what has gone before, but recognizes that it is a male viewpoint with male heroes and male interactions. The women were always there, it says, but confined to the scenery, to the background, to the support team. Kij brings these women forward, aware of the hurdles before them  - Dorothy Sayers' Harriet Vane would be comfortable in Johnson's Ulthar. Exceptional women are still considered unusual. The timeline is also advanced, to say that the Dreamlands exists in a hundred years back - the Women's College is a new thing, and there are steam engines and mechanical farm equipment in this version.

Yet while even subverting it, Johnson remains true to the work. There are the zoogs and the gugs, and the world pivots on the caprices of the gods sleeping in distant Kadash. The seriousness of the situation, and the doom that hangs upon Vellit Boe, deepens the further she goes on the hunt. It lacks the nihilism of Lovecraft, but does not shy from the hard choices.

And the tale is a perfect novella. Love or loathe Lovecraft's style, it often involves ornate flourishes and arcane terminology. Vellit Boe's language is tight and precise and the book is just as long as it needs to be. It could have been a short story, but a little cramped, ticking off locations, more paean than prose. And it could have been a thumping large fantasy epic, or even a trilogy, where you are ten chapters in even before Claria disappears. But  it is not, and its economy serves it well.

This is a contender for the Hugos and Nebuli this year, barring any further weirdness from the Sad Bunnies and their ilk for whom good fiction is unrecognizable and anathema. Read it now and avoid the rush.