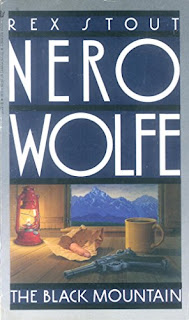 I have a lot of paperback mysteries on my desk. Their slender format (much less than your typical doorstop of a fantasy novel) makes them very portable for plane flights. Also, I've been laid up recently with minor surgery, as a result taking tub baths, and dropping a paperback in the tub is less damaging than submerging your iPad. There were two big categories for mysteries this year:

Provenance: Various, including a number of used bookstores. Most of the Half-Price breed won't carry something this old and usually worn, but there is a store up in the Cap Hill area, Twice Told Tales, which is well-stocked with cats in abundance, mysteries in general and Nero Wolfe in particular.

Review: I've talked about the Nero Wolfe books before, and am now treating them as a limited resource, to be husbanded and read only when trapped on a plane or in a bathtub. As you can see, I've spent a good chunk of time on planes and in bathtubs this past year. There are only so many original stories lefgt, since the author passed on in 1975, and while they have found another writer to pick up the character, it is not the same (One later-day book I picked up had the first line "It all started at Lilly Rowan's Superbowl party." I can't tell you what the second line was because I put the book back down and called in the HazMat team).

Pretty much everything I said before still holds - the titular Wolfe is a fat (only 10 lbs heavier than I am nowadays), lazy, brilliant detective, kept from a complete state of inertia by his smart, wiseguy, well-grounded assistant, Archie Goodwin (who narrates, so he may be a bit prejudiced in this regard). Clients are usually dictated by the state of the bank balance for keeping their New York brownstone going, or by personal connections with the pair. Wolfe does not tolerate a large number of things - fools, leaving the brownstone, hugs, handshakes, violating his personal time raising orchids, letting a woman stay in the house - and inevitably one of more of those things must be tolerated in the course of the mystery. There are usually dead bodies involved, and there is often an increasing death count as the days progress in the course of a case.

The thing is, the mystery isn't the core of the story. Stout generally plays fair in his mysteries, and gives the reader enough suspicion as to whodunnit and why, but since he traps us in Archie's brain, we often find out when Archie does, but know only that Wolfe is off dealing with other agents and opportunities as we follow Archie around. The mysteries usually wrap within two pages of the end of the books itself -"The Murderer was X. Then we had a perfectly adequate dinner. The end"). That feels a little rushed, but once the murder is solved, there is not much point hanging about.

Except the attraction of these books is the writing as opposed to the clever mechanism of the crime or the brilliant solution. In writing this entry up I had to leaf through them to remind myself WHO the guilty party actually was in many cases. In Archie, Stout has a perfect, engaging, heroic narrator, who manages to charm his way both through the book and with the reader. Wolfe is tolerable only because he comes to us through Archie's lens and with archie's approval. Stout did some additional books with another detective - Tecumseh Fox (yeah, there's a pattern in the names), but they don't land as solidly without Archie's presence.

The collections are akin to the novels, but more concentrated, and reflect the mechanism of delivery for these stories. They appeared in other media (once upon a time, there were weekly print magazines with names like Liberty and The Saturday Evening Post, that would print fiction on pulverized dead trees), but are collected together, usually three to a volume to make up word count. Given their shorter nature, you get a better idea from the start where the tip-off is that indicates the guilty party. But they are still solid.The most recent one on the list, Death Times Three, is posthumous, and contains earlier published drafts that were later changed, expanded, or sent elsewhere, and is a good study for those interested in seeing how stories evolved.

The exception the expected pattern of Nero Wolfe mysteries, the one that tests the rule,is The Black Mountain, which is recommended even if you are not a mystery fan. Here the pair leave New York City, and the United States entirely, to find the killer of the owner of Wolfe's favorite restaurant. The pair's journey takes them to Montenegro, Wolfe's home country, and lacks the cosmopolitan vibe, huge cast of suspects, familiar support characters, and unbreakable personal flaws of the other books. And it does it in a fashion that does not undercut the nature of the characters themselves.

I recommend all of them, but if you're digging up old Wolfe books, be sure to catch The Black Mountain.

But hang on, there's more:

Provenance: Re-gifted from a friend. Will re-gift them in turn.

Review: And sometimes it just doesn't work. Blame the translation, both in culture and in physical text, or the nature of the original source, but the Maigret books did not hold me, and I will be honest, I pressed forward only to see if they took an upturn, but in these three they did not.

Chief Inspector Maigret is a Parisian police detective. His work is mostly procedural. He walks around, talks to people, gathers evidence, and the books end in a confession and usually additional bloodshed. His work takes him into the sordid parts of peoples' lives.  He is overly reflective and introspective, and much of his dialogue is internal and filled with self-doubt. In Riveria he is a fish out of water on the sunny beaches, In Home he returns to his hometown, where few people are left that remember him and he feels like a fish out of water. In Reluctant Witness he is confronted with the fact that he is getting old and police procedures are changing on him and he feels ... well, you know.. In each case he spends much of the books cogitating on how much he does not fit in with his particular case. In fact, in Home, there is the "collection of suspects to reveal the murderer", and Maigret is not even the instigator, but rather a passive witness to the entire proceedings.

It could be a merely a cultural gap - Maigret is a very existential character, trapped in his own thoughts. But the result was a trio of books that, once read, I can let pass out of my life without any further regrets, without even an internal monologue.