My Year in Books: Howling Wolfe

[This year, I was curious about what I was reading, so when I finished a book I put it on an ever-growing pile by my desk. I note the provenance of the book (where I get it from) in addition to its regular info. Here's what I've been reading.] 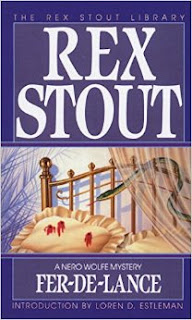 Last time we talked about "solving" an author, and how that could result in inadvertent disenchantment and drifting off to other works. Here is a case where the familiar runs deep, and has produced a series that I just spent much of the year snacking on like literary popcorn.

The Nero Wolfe mysteries by Rex Stout, starting in the 1930s  are directly descended from Sherlock Holmes, if by that you mean that Sherlock's overstuffed brother Mycroft plays the part of the Great Detective and Watson is a pretty smart cookie who takes no guff from his boss. Wolfe is a corpulent, reclusive, misanthropic private detective who prefers to stay in his brownstone and tend to his orchids, rousing himself to solve mysteries only when the bank balance gets low. Archie Goodwin is his Watson, but here he's the leg-man. He's a smart-cracking wise-guy who humanizing his unempathic boss, always has a comeback, and has an eye for the ladies. He's also the narrator, so we are brought into the world through a very biased, but generally reliable, narrator. Archie is going to get you the straight dope, but he's not going to tell you what Nero is thinking until he finds it out from the big many himself.

Archie and Nero are immortal,and move through the decades like the Legion of Superheroes in their time bubble. Regardless of the decade, they have been in business together about seven years. Neither seems to age, huge amounts of time can elapse without showing any effect on them and their confederates. However, they remain topical, dealing with things in the wider world. Was Stout to still to be alive today, they would trade barbs about the Internet (Wolfe would ban it from his house as a pestilence, while Archie would have his own setup in his room, but feel it was better to get the information direct because you can tell when they're lying at you when there isn't cyberspace in the way).

And there are things that almost always happen. Wolfe never leaves the brownstone, except he ALWAYS leaves the brownstone sometime in the story, but that tells you how important the particular case is. Wolfe operates off his own sense of ethics, in which he will get justice outside the justice system and walk away with his hands mostly clean. Wolfe and Archie always foils the police, often in the form of Inspector Cramer, their Lestrade, along with a collection of flunkies for Archie to outwit on a regular basis. There is a mob of suspects, who are all called together in one place for the final reveal. Archie will, of course, hit on one or more beautiful women. Wolfe, for his part, will be a bundle of mannerisms and eccentricities which I hesitate to list because I have only read seven volumes so far, but include orchids, yellow shirts, beer, food, not wanting to be touched, and a marked dislike of women (which, like leaving the house, is continually tested).

The clients and cases take a variety of forms, which keeps the spark. Some come over the transom as standard clients, while others have some particular connection to the Wolfe household. Fer-De-Lance connects an immigrant metal-worker with the death of a college president. Over My Dead Body presents a previously unknown adopted daughter, a ballerina at the heart of a murder in the shadow of the World War. Black Orchids are two stories - one that get Wolfe out of the house for a flower show where death awaits, and another for a powerful hostess who Wolfe turned down who turns up slain.  The Silent Speaker involves government oversight versus industrial power. The Second Confession and In The Best Families involve Wolfe crossing with his Moriarity, who in the first shoots up his conservatory and in the second forces Wolfe to go on the lam. Of them all, the most traditional is Murder By the Book, which involves a  particular dreadful novel that, which unpublishable, leaves a trail of death (and sends Archie to California by plane).

So, well-rounded, generally likable central characters (well, Archie is), combined with a variety of stories and plots. The end points are generally fixed (domestic life at the start, gathering the suspects at the end). And Archie's narration, which creates the feeling that the author himself is taking a great delight in the character, and pulls away from his wisecracking when the plot demands it and another body thuds into their lap. All of this makes for an engaging and entertaining series. Stout's work has brought over the British consulting detective and given it an American spin that has proved to be timeless.