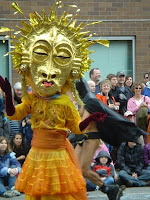 This is a tough time of the year for me. My sleep patterns tend to be shaped by the sun, and while I can wake and function in darkness, I have a difficult time sleeping when it is light. In Seattle, the northernmost major city in the continental US, that makes for difficulties when the sky lightens a 5 AM and does not grow dark again until after 10.

You read that right. I am bagging on Seattle for having too much sunlight. Go figure.

However, the official start of summer has its nice points, one of the chiefmost being the Fremont Solstice Parade, a whacky local event that draws most of the city to this off-kilter territory. 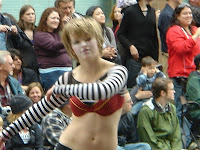 Fremont, for those who are not in the know, is the self-declared center of the universe, and home to both the Fremont Troll and the Lenin Statue. It was for many years a haven for artists, and under the rules of modern gentrification has been upgraded a couple times, but still seeks to maintain its quirky and peculiar charm. In particular, the parade, which bans logos, printed words, or motorized vehicles. 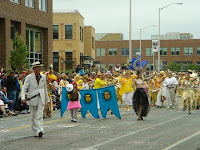 Oh yeah, it has the naked bicyclists as well. The organizers resisted it for many years, but have finally embraced the idea of a massive tour de nude at the start of the parade to just get it out of the system. The challenge, though, is that the rest of the parade is more of a saunter than a march, with teams of salsa dancers, belly dancers,gymnasts, puppeteers, and other foot traffic, so there is a big gap between when the cyclists come through and when the parade proper arrives. Fortunately, the "Chalk Fairies" (members of the local teamsters) pass out chalk and the kids (and adults) draw on the parade route until the parade meanders down to your area. If you're in a hurry, you're in the wrong neighborhood. 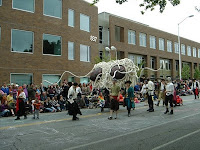 And it was cool this year, both in temperature and temperament. Much less political and anti-corp than in previous years. Dick Cheney in prison stripes on a bike was present, but seemed almost a little passe, like the guys in the Dick Nixon masks. But there were things like a float powered by pedaling Elvises (Elvii), the Flying Spaghetti Monster, a giant white dog puppet name Dogody, a giant spider puppet with stuffed animals and cabbage-patch kids in its web, the Sisters of Perpetual Indulgence, a treant (with sapling) and a giant walking totem pole. Oh, a big Yellow Submarine as part of a multi-part effort that included Green Apple Bonkers, Blue Meanies, Snapping Turtle Turks, Sgt. Pepper, and a bunch of ersatz Beatles leading a sing-along from the crowd. 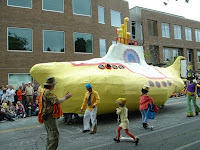 And yeah, its an interactive parade, which accounts for its leisurely nature. Everyone gets pictures. The dodgeball team is encouraging small kids to kick balls into the street. And you too can play in the Sea of Holes or help paint an art piece being created over the parade route.And you can lay down in front of a big twenty-foot beach ball rolls down the street. What there weren't a lot of was visible police presence. Most of the people keeping folk back towards the curbs were local volunteers in orange jackets, and the cops only seemed to reveal themselves at the very end, once the parade had passed down to Gasworks Park and the streets had to be reclaimed for car traffic. And like a passing dream, the Midsummer Dream of Fremont passed on.

And now we go into Summer, and I hopefully can get a bit more sleep.