Electoral Storm: The Mourning After

To say it has been a weird week is an understatement. Over the course of twelve hours, late Tuesday to early Wednesday, I found myself transformed from the voice of needless concern to a voice of cautious hope. I went, without changing an atom of my being, from being Doubting Thomas to Peter the Rock, from worrier to stalwart. I don't think I changed, just the rest of the world.

I work in a pretty young, liberal office – not quite a wild and wooly as when I joined, but what we do (creative stuff) nurtures a tolerant, smart, open-minded, progressive mindset. So as the tracking polls started ticking upwards, as the moons came into alignment, as the tea leaves danced around the bottom of the cup, as even Fox news pushed the challenger ahead, spirits rose. We could see this insufficient president turned out.

I heard about the “Redskins lose their last home game before the election – the incumbent is toast!” about five times. I pointed out that no team in baseball has ever come back from a three game disadvantage to win a national championship. Until this year. My point (Causality does not equal corelation) was waved off.

And then the national results rolled in. A defeat, a near one, but a clear defeat nonetheless. And with it a scary sense of otherness in my friends – how could so many people disagree? How could so many people endorse the status quo? Wednesday was like a lid had been dropped on the place – a stunned silence. I think part of it was because hopes were high, the results were particularly crushing. A lot of people took electoral rejection as personal rejection.

And so I went to triage, talking to folks, sharing experiences. I benefit from the fact that I’ve been here before, only worse in both raw percentages and electoral votes – Mondale, Dukakis. I benefit from having conservative friends, in that I remember what they went through when we returned That Man (as one called him) to the White House in ’96. I benefit from a political life well-lived, and pointed out when I was 15, I was really, really smug that “my man” Dick Nixon had routed those anti-American McGovernites almost across the country (and look where that got me).

The net was as bad if not worse – one friend swearing off politics, another swearing that he would become more involved. Long silences from some, loud screeds from others. Threats, curses, primal screams, dark allegations. And I can only advise patience. Politics is a process, not an end result.

One last piece – I really hate the Electoral map, which reinforces the idea of the two physical Americas – If blue got 51% of a state, it is blue, and all the red voters suddenly don’t count, and vice versa. This one popped up and I’d like to share it: 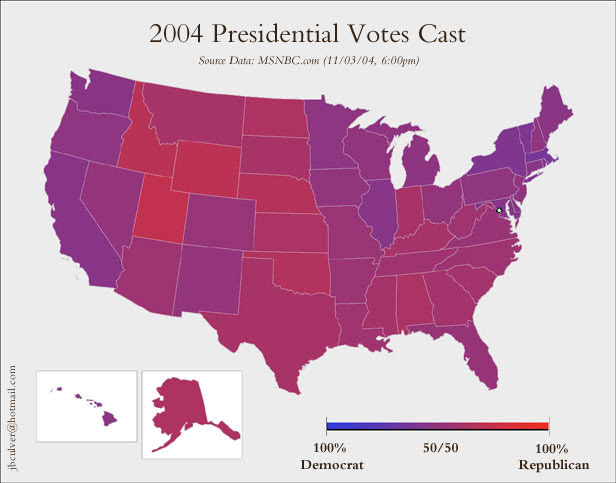