So yesterday I was snowed in, and took some pictures of the surrounding snow. One of the pictures in particular was interesting in that it was a pileated woodpecker, a truly beautiful bird, perched across the street on a power pole. Here's the shot, from the safety of my own home. 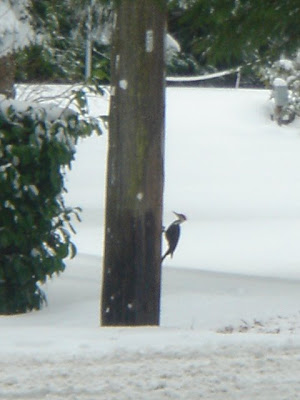 And about two hours later a neighbor knocked on our door. He's renting the place behind one of our neighbors, and was concerned about the power pole falling over. It seems our woodpecker bored a hole eight inches deep, fifteen inches long, and four inches across. 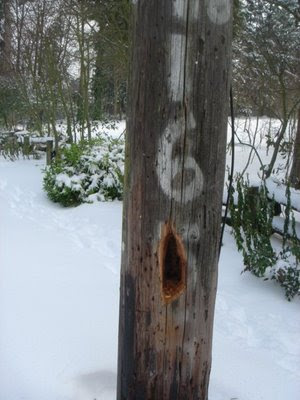 Now, on one hand I know as a former civil engineer that even a hole this size is unlikely to cause a collapse. On the other hand, its been 25 years since I've been an engineer, and we DO get high winds up here, so a big gouge in a power pole is not a good thing. So I called into Puget Sound Energy and reported it. I apologized to the nice woman that I realized that there were real power outages but I would feel particularly foolish if I let it go and then the thing collapsed, kicking off a real power outage. She laughed and said she was never surprised by those mother nature animals, and in the end we put it in the miscellaneous category for investigation.

And the bird? He's back this morning, working on the OTHER side of the pole. Obviously he's some kind of saboteur.