I have a relatively unique name, but there are other Jeff Grubbs in the world. One is an NPR radio host down in Santa Cruz. One is a coroner in Saskatchewan. One is a chef in Louisville (and owner of Lentini's). One is a rugby referee in New Zealand. And one actually reports on the computer game industry.

This last Jeff Grubb, who writes for Bitmob and Forwards Compatable attended PAX, and I had hoped to get our picture together, both to prove that a) there were multiple Jeff Grubbs in the wild, but also b) to see if the sheer concentration of Jeff Grubbness would rip the time-space continuum and turn the entire world into a living Jeff Grubb Day.

Such was not to be, but Jeff Grubb (the other one) took a picture of Jeff Grubb (Me) at the Guild Wars booth in mid-signing, with a huge line (off stage right). 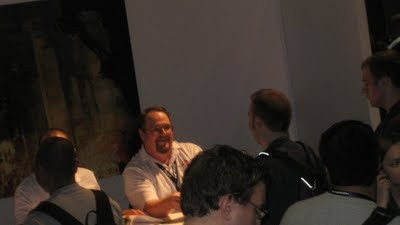 So we got two Jeff Grubbs within twenty feet of each other, and the universe as we know it survived. I'm encouraged by this fact, since it now means I can go to Regina or Louisville with less fear and foreboding.