The Return of No Quarter (Part I)

There is the old adage: The reward of doing your work is more work. I slog through 50 states worth of quarters (with an added bonus of a few of our imperial properties), and what does the mint do? Back up a truck with more quarters.

This time, we're not talking about states per se. No, this is the America the Beautiful series, which gives each state a second chance at self-promotion, but this time with a stated topic: National Parks or National Sites (in case your state doesn't have a National Park) or National Forests (if you're really hurting).

And I, for one, am of two minds about covering all this. I'm thinking we're looking at eleven years worth of mighty vistas and scenic views. And I wonder if the Internet will still be around by the time I get to the end of it. On the other hand, the previous guided tour through America's coinage was so much fun.

OK, I'm in for another go-around. Let's begin: 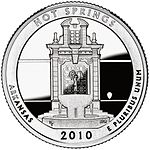 How does Arkansas rate as the first quarter?

I mean, Yellowstone is the FIRST national park. But Hot Springs was made a federal reservation back in Andy Jackson's time, though no legislation was passed to protect it and a bunch of people claimed it before the feds moved back in and chucked out all the squatters in 1877. So when the national park service was founded in 1916, Hot Springs moved over to that department, and in 1921 it became the eighteenth (and smallest) national park. But it was still "founded" way back.

Yeah, it feels like we're splitting hairs here to me, too.

The Hot Springs quarter depicts the first Dancing Water fountain outside Vegas. No, sorry, it actually a fountain in front of a facade of one of the buildings. Not quite sure if the fountain depicted is in front of the doorway depicted or not, which takes it perilously close to my pet peeve of throwing a bunch of stuff on the coin in hopes something sticks. But this one excavates itself with a nice balance.

OK, not an auspicious start to a series about the Beauty of America, but maybe we'll appreciate it better after we get tired of all the mountains and forests that are coming up. And to be honest, the design is pretty solid, and how are you going to show a lot of hot water, anyway?

And here's a general question - if we've known all such places like this, with superheated water and other volcanic tell-tales, why are we surprised to discover that there is an earthquake fault running up the middle of the country? But that is incidental to this quarter.

Yellowstone - Wyoming (and a bit of Montana and Idaho, but that's OK, they're willing to share) 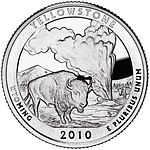 Wyoming seems to have gotten the memo - their previous state quarter had all the soul of a video game slug and all the deep artistic vision of a mudflap. This time out, they put the pieces together nicely, even if it means parking a bison over the warm, muddy earth of Old Faithful.

This is a good quarter, and one that you're going to have a hard time confusing for some other wild outdoor scene. Being early in the sequence this time, they get first dibs on the american buffalo, which I believe is now the most popular mammal on our coins after mankind. 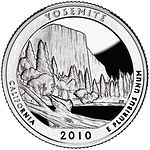 So here's one of the challenges to running through the states a second time - what happens when you shot off your big guns the last time around? The previous California quarter was a testament to John Muir (who photographed Yosemite), Half-Dome (at Yosemite), and the California Condor (who was ... um ... vacationing near Yosemite). Now with this new coin we're back at Yosemite again, but this time with a shot of El Capitan, the biggest block of granite in the world.

And here I already made my Star Trek joke about Kirk climbing El Capitan in Star Trek V: Please Make the Hurting Stop. Seriously, they deserve bonus points for NOT showing Spock in a levitation harness mocking a climber. But they did do more than just show a big block of rock, with foreground, middleground, and background pieces.

On the other hand, we're three coins in and we're already looking at repeats? Would the natives of Los Angeles riot if you put the Golden Gate on this one? 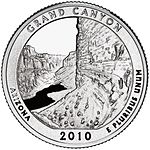 Another repeat, though like Yosemite coin, it is an improvement over the mishmash of images from the first try. Almost as if the state quarters were rough drafts for this second set.

This is another shot of the Grand Canyon, but unlike taking one from the top (with the misplaced Saguaro cactus), we are halfway down the side, getting a beautiful panorama. As a bonus, the shot takes in the granaries which were used by the Native Americans for storage in the area, managing to unite both the man-made and natural in a way that the Hot Springs coin does not

I think this one is my favorite of this year's crop. I like the sense of depth it gives as the canyon snakes into the distance. Plus, it is a part of the canyon you don't see from the normal vistas. I really want to see how its texture feels when it is released. A good carving can really make a coin like this come alive. 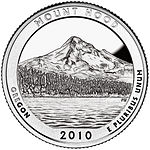 Well, here come the mountains, at least. I'm probably going to get tired of them by the time we get the end of it all, and there will probably be a quiz or something.

Why Mount Hood? Well, because they put Crater Lake on the State Quarter and, unlike Arizona, couldn't figure out a good way to bring it back for one last curtain call. So we see the majestic Mount Hood, surrounded by the living barrier of killer pine ents which are used to keep tourists from Washington State from climbing it. Unlike the California coin, it is just a vista without anything in the foreground, which actually leaves it feeling a little empty.

That wraps the first batch - a couple promising ones, and no real clinkers. It's an OK start.