(Five of) The Ten Little Indians 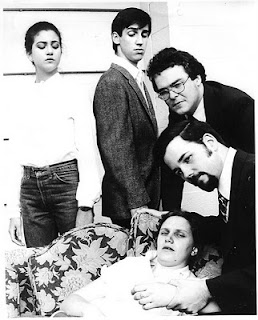 The problem with the permanent record that is the Internet is that every photo, comment, and action has the chance to resurface suddenly and without warning, creating that embarrassment of looking back at your college photos at any time, and a reminder of how the years have worn on.

Case in point, the photo to the left. It is a promotional shot for the South Park Conservatory Theater's production of Agatha Christie's Ten Little Indians (Also called "And Then There Were None"). The time is thirty years ago - 1980 would be my guess. And the players were all part of my D&D group.

Let me back up a moment. The Lovely Bride's mom, Nardi, is an actress and a stage director, and at that time was involved with South Park Conservatory Theater (which was situated in South Park a large county-fair-sized park south of Pittsburgh). They were doing a production of Ten Little Indians (yeah, it goes by other names, but that was the one we used), which is a manpower-intensive plays - a lot of roles to fill. A bit of a challenge for straw-hat volunteer theater.

So Nardi turned to her daughter's D&D group, which met regularly at the house. She had already grabbed me for a production of Arsenic and Old Lace (I played one of the cops), and she recruited some of the rest of the team to fill in the other roles.

We were all murderers, of course, of one type or another, and are bumped off over the course of the play.

The young lady to the left, I fear I have forgotten her name, played Emily Brent, transformed into an elderly woman through the wonders of makeup. Next to her is Kirk Botula, who now is COO of a tech firm in Pittsburgh, but at that time was playing Anthony Marston, an effete twit who presages his own death with a toast at the close of Act 1. Next to him in yours truly, with my stern grown-up face on, since I will be aged as well to play General Macarther (No, not that one), who sent his wife's lover to his death during the war. Next to me is Jeff Liebmann, who posted this photo to Facebook in the first place, as Doctor Edward Armstrong. Jeff's now a Unitarian minister, and still has the beard. And reclining on the settee is the Lovely Bride as Ethel Rogers the maid. All of us were second bananas who would add to the body count.

It was summer stock and it was fun and it showed I had a high forehead back in those days, and that my hair was not more manageable than it is now. And while I have not descended into the full grey-haired, wrinkled look of the old general, I have picked up a few grey hairs and wrinkles along the way.