The (Truly Amazing) Return of No Quarter (Part VII)

Before I start in on the quarters from the America The Beautiful series for this year (also called the National Parks Quarters, though most of them are not about National Parks), there's another matter I want to address.

Are quarters getting lighter?

I'm starting to wonder if it is simply nostagia, but it feels like the new quarters really weighing less than their earlier non-state-oriented kindred. Are the old quarters heavier? Is it just an illusion with the new ones being shinier? Or is it that the old quarters have all sorts of patina and junk built up on them over the years?

I don't have an accurate scale, but someone out there does. So really, is the reason we don't feel a comfortable jingle in our pockets because there is less metal in our change?

Anyway, on to this year's crop of collectible quarters. For those new to this (and shame on you, it starts way back here and here ), here's the rating system: 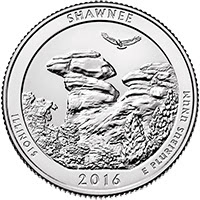 As a coin, its ,... just all right. I mean, not horrible. The use of white space to frame Camel Rock (which doesn't look MUCH like a camel - on the coin more like an AT-AT, really) is good. And the addition of a hawk soaring on the updrafts gives a badly-needed sense of animation and life.

But, you know, its still a pile of rocks, and the Western states have a lot bigger piles. 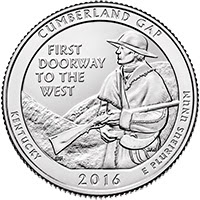 Kentucky returns the favor of Illinois by choosing a location that's almost out of state as well, on the border with Virginia and North Carolina. But at least they have an excuse here - most the early settlers in Kentucky (those that did not come down the Ohio) came through this gap. This is the path that early pioneers like Daniel Boone (not shown) and Father Guido Sarducci (shown w/o mustache) and their ilk took to get through the Appalachians - looking for a bathroom, hence the inscription "The first doorway to the left, after the den."

And before we go any further - yes, he is holding that gun correctly. The whole over-the-shoulder-revolutionary-soldier look worked well enough for parade grounds, but if you're going over rough terrain, having your hand on the lock is a pretty safe move. So yeah, that part's not going to get any flack from me.

The layout is pretty nice, with the open white space forming a nice background for the lettering, One gripe would be that the hills behind Guido tend to blend in with jacket, making the pioneer look a little chunkier than he really is. But that's a minor thing, and may play out in the final carving. 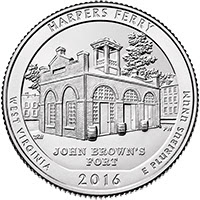 Well, you have to give West Virginia its props. Not only are they commemorating an event that predated West Virginia's founding, but one that was one of the kick-off points for the Civil War.

Here's the story for those of you who did not binge-watch the Ken Burns series and have been wondering why John Brown's body has been moldering in that grave. In 1859, Abolitionist John Brown launched an attack on the US Armory at Harpers Ferry, planning to steal the weapons there and use them to arm a slave revolt. He had invited Harriet Tubman along for the raid (she cancelled because of sickness), and Frederick Douglass (who turned Brown down, telling him it was very, very, very stupid thing to attack the US Government).

The raid went pretty much as you'd think it would - early success capturing the armory, followed by the raiders being surrounded and their escape cut off by townsfolk and militia. Brown's raiders pulled back to a more easily defended fire engine house (which is what is shown on the coin as "John Brown's Fort"). President Buchanan dispatched a marine detachment under (then) Colonel Robert E. Lee (on leave from his unit in Texas) . Lee arrived on the scene and sent his volunteer aide-de-camp, "Jeb" Stuart to meet with Brown and secure a peaceful surrender. Brown refused, and the military stormed the "fort". Ten raiders were killed, and seven more (including Brown) were captured and later hanged. The trial and unrepentant nature made Brown a cause celeb and ratcheted up the tension between north and slaveholding south.

The coin itself is a shot of that firehouse (now on that site in reproduction) from its brief time as a "fort". Three-quarters view, it fits the coin nicely, and lacks the animation of other coins, but is still a solide presentation of an important part of American History. Probably the best coin of this year's group. 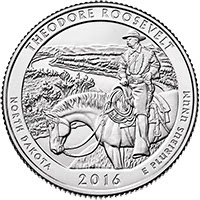 North Dakota has it rough - all the cool stuff (such as it is) is in South Dakota. They could have shown one of the local hoodoos (a local word for "pile of rocks") but instead managed to put together a nice coin that celebrates Teddy Roosevelt. Which, given the fact that he got this whole National Park thing going as a major franchise, makes a modicum of sense. It makes even more sense when you realize that Roosevelt, though a New Yorker, came out here a lot, and the state is littered with statues, parks, and monuments to the man.

Teddy spent some time in his 20s out in this neck of the woods, in his early, pre-Rough Rider era, post-mustache but pre-spectacles. The coin shows him on horseback because, you know, what else are they going to show? A pile of rocks? The river (That's the Little Missouri, FYI)? Bison from the state quarter that accidentally got all shot up? All the drilling sites that now surround the park, coupled with whiny notes from the companies griping that can't have THAT land too?

The coin itself is not bad at all. The Little Missouri snakes through the landscape, providing a band of white space and allows us to look down from a vista with Teddy. And and putting him on a high point, on horseback, captures the relative flatness of the land, which actually is a sell point for North Dakota, as it disappears in the badland hills far beyond.

Rating B (Not Bad) 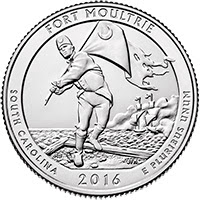 OK, this weird, in that it commemorates something that happened at Fort Sumter, but not the BIG thing that happened at Fort Sumter. There is no Fort Moultrie National ANYTHING, but rather it is wrapped up as a part of Fort Sumter National Monument, and calling the Moultrie piece out as a monument for a coin is kind of like praising Dennis Rodman's basketball career with the Chicago Bulls while Michael Jordan standing RIGHT THERE next to him.

What the coin commemorates is this plucky little fort standing up to a naval bombardment by the Brits, protecting Charleston from invasion (for a whole four years before more Brits showed up and took the city anyway). It portrays not a shriner with a Turkish flag but rather a Sergeant WIlliam Jasper returning a home-made flag to the ramparts at the start of the American Revolution. The fort was known as Fort Sullivan  back then, but commanded by William Moultrie, who repelled a British Naval force and had time to create the "Moutrie flag" which is shown on the quarter - a blue field with a white moon in the upper left. Actually, cool flag.  In any event, the Brits came back and captured the Fort four years later, and renamed it Fort Arbuthnot, and held it until the end of the war.

It's not a bad story, but kind of overshadowed by what happened just next door, where less than a hundred years later separatist forces fired on the United States garrison at Fort Sumter, kicking off the most bitter struggle on American soil (Because, as we know, attacking the US Government was a very, very, very bad idea). Moultrie is very nice and all, but given a choice, which would YOU name the National Monument after? If West Virginia can fess up to a heist film gone horribly wrong, then SoCare can at least say - yeah, this was important to history, even if it was not a particularly shining moment.

The coin itself is ... weird. Look at Jasper's feet, and how the rest of his body is twisted in the opposite direction. If he was using the flag as a bat and trying for a pop fly, maybe that pose would work, but rather it is replacing a flag while under assault by the Brits ... who are  ... behind him. It looks like he's leading the attack on the fort, which is not the case.

This is probably the strangest coin I've seen, part for carving, and part for subject matter.  There were other design candidates with a lot more promise (Here's a link to a picture of all the prospective candidates - most cases they have chosen the best of their group, though Shawnee coins are resolutely always a pile of rocks),

Rating D (Even subject matter aside, that pose is just weird)

That wraps this year. Next year is four states and the District of Columbia, where Fredrick Douglass gets the moment he missed when he decided to not go hang out with John Brown at Harpers Ferry.