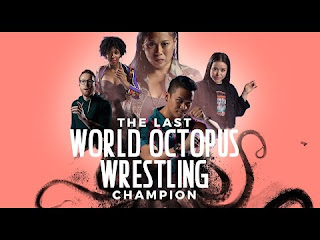 What a minute, didn't you say you were done for the season with plays? Well, yeah, but in the program book for the Seattle Rep there was an advert for Arts West over in West Seattle for a new musical by Justin Huertas. Mr. Huertas, in addition to acting in Tiny Beautiful Things, was the mastermind behind Lizard Boy a few year back, which was one of the Lovely Bride's favorite plays.

Let me talk about the venue for a moment, since its new to this space. Arts West is nicely situated at the Junction, a business district in West Seattle. The space is intimate without being tight. It is theater in the round for this production, which often means that the actors have to keep moving around so you don't spend the performance looking at their Captain America-level backsides. The Lovely Bride and I had front row seats, but there was enough room between us and the stage proper for the actors to move around without worrying about tripping over us.

Anyway, the play: Octopus wrestling was a thing in the Pacific Northwest at one time. Divers would hunt octopuses off the Seattle's shores, bring them up bare-handed, and the diver who brought up the biggest octopus would be the winner. Grace (Corinna Lapid Munter) won the trophy the last time it had been done, eighteen years back. She doesn't talk about it anymore, and had her son Todd (Christian Quinto) hide the trophy and never tell daughter Lee (Rachel Guyer-Mafune). who, by the way, just turned 18 and is going to be a freshman at the U-Dubb. There Lee meets Nia (Porscha Shaw), who she is immediately attracted to, and David (Tyler Rogers) a marine biologist and octopus fan.

Lee finds the trophy and wants to know more about Grace's octopus wrestling days. Grace is now plagued by the sudden incursions by the Undertow, a sea spirit, who sends starfish and bivalves to attack her. And Lee starts mutating into something more mollusk-y and discovers Nia has the same problems. And Todd and David connect. And truths are revealed and Grace understands and Lee grows.

Did I mention that it's a musical? Yeah, It's a musical, and all-singing, all-dancing extravaganza. Well, mostly singing. A lot of good dancing and choreographed conflicts. The characters switch off from their roles to become a narrative Greek chorus and representatives of the Undertow. The actors have mini-mikes on their foreheads like South Asian bindi, and the sound levels were perfect. Live musicians off-stage in perfect harmony for the space. Having had to deal with wonky sound in much bigger halls, this was great.

The actors were top-notch as well. Ms. Munter brings the necessary strength and fire, both physically and emotionally, for her character. Guyer-Mafune is a very different character than the one she portrayed in Feathers and Teeth, and just rocks the role. Porsha Shaw previously showed up in Nina Simone's Four Women, annd is excellent as Nia, both in voice and acting (Nia's a deeper character). Quinto and Rogers get to be a little broader and comedic, but they both bring a sweetness to their characters that makes everything hang together.

Ultimately, this the tale of the fae, the mystical and mythical people of the forest, transported from the Black Forest and the Brothers Grimm in to the stony beaches of of the PNW. The alien and inhuman elves and spirits are replaced with another intelligence, cool and aquatic, in the soul-drenched eyes of the cephalopod. The play is also about love in a great handful of permutation, about family, and mixed in with enough Seattle references to connect with any native Seattleite.

How good was it? The Lovely Bride is checking out next season's Art West schedule, and I'm telling you to check it out (In the first draft of this review, I thought it had closed on June 28. The management regrets ...)