Plague Books: The Evolution of Gaming

The Elusive Shift by Jon Peterson, The MIT Press 2020 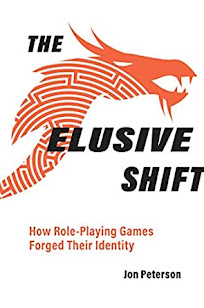 Provenance: Christmas present, 2020, despite the fact that it went on sale on 22 December of that year. This one is jumping the queue in the reviews, because I have three friends who are already interested in reading it as well.

Review: OK, I'm a fan of Playing at the World, both the book and the blog. PatW covers the history of wargames and roleplaying games, up to about 1975 or so. Elusive Shift carries the story just a bit further, drilling down on the gaming community from about 1975-1980, and the changes that swept roleplaying during that time. In particular, it starts with the fact that the original D&D, the little brown box with the pamphlet-sized booklets, were not called a roleplaying game at all, but rather a wargame. It did not even mention Dungeon Masters*. So how did things change? How did D&D evolve?

Peterson concentrates on the playing community in this book. TSR walks onto the field with statements by Gygax and Top Secret designer Merle Rasmussen, but most of the action is outside the city limits of Lake Geneva, in the fandom and in the myriad of small competitors that sprung up around the initial release of D&D.

Peterson works from primary sources as well, with the published fanzines of the era, as opposed to the memories of the original participants. That's got plusses and minuses. One great plus is that memories are short and recollections are often shaded by intervening events. The past gets revised and rewritten in the retelling. I cannot remember if our group ever referred to the DM by the earlier term of Referee (even though we had a song called "My God What a Cheap Referee")**

The downside is that these primary sources are they are the words of people who wrote stuff down, which is a vocal subset of the entire playing audience. These were people who had opinions, and for whom examining, expanding, explaining, and defining the game was as important as playing in it. It is valuable information, but there is a lot of personal opinion in there as well.

One of the big primary sources for this information was the late Lee Gold's Alarums & Excursions, an excellent zine that has run from the distant past of D&D to the present. In construction, it was actually a collection of zines - you'd write up your four or ten pages, make copies (often mimeographed) on colored paper, send in the copies, and Gold would assemble and distribute them to the other readers and contributors. I've read a number of copies over the years, but because I did not read them sequentially, I missed a lot. Many writers would respond to things from the previous issues, making any edition of the magazine sort of like coming into the middle of a thread on the Internet, where everyone seems to know what is going on but you.

Lee Gold created A&E in part because she came out of SF Fandom, and Peterson shows that as a definite split in the early fans - those that came out of SF that were attracted by the subject matter, and those who came out of wargaming, who were playing Avalon Hill games like Panzer Blitz and Gettysburg, writing up Diplomacy 'zines, and playing games at conventions. Each group wanted different things out of roleplaying games and saw different routes forward. From this dynamic came a lot of the early fan-based evolution of D&D

The early TSR designers were mostly from the wargamer side of the equation, but a lot of the longstanding RPG worlds came from the other side - imaginary worlds that used roleplaying as a mechanism to tell their stories - The Forgotten Realms, Glorantha, and Tekumel all had a life before before becoming RPGs. But most of the design team had wargaming blood in them, and while I was an SF fan back in the day, I did come in the door through wargaming. (The Lovely Bride, on the other hand, had her own Federation Starship, the Quetzalcoatl, in high school, so tag her more from the SF contingent).

The book was a tough read for me, primarily because I kept stopping to double-check stuff and think about what my experiences were during this period. I started at the Purdue Wargaming Club in the fall of 1975. We never had a Caller, though my group tended to have a Leader who kept the group together and a Mapper who kept the maps together. We solved problems like how to deal with paladins and thieves in the same party, alignment languages, and the fact everyone wanted to be an dual-class elf.  Oh, and how to handle "Fighting Florentine" which everyone else knows as dual-wielding. I should unearth the old volumes from the storage room and remind myself how much we used and discarded over the years (encumbrance, critical hits, damage locations, segments, weapon speed factors, and unmarked doors that had to be pushed/pulled without a clue to which, just to name a few).

Roleplaying has evolved and continues to evolve. Even the name has been bent and morphed over the years. It has been spelled as roleplaying, role-playing, and role playing (I go with the last because that's what we called it at WotC, but before then I was more hyphenated). We have lost the name to computer games, which at the dawn of time we called CRPGs. Even today, while some arguments unknowing recapitulate earlier discussions, there are new designs that challenge the traditional boundaries of role-playing games.We continue to change, and much of that change occurs on the ground level. The heart of roleplaying at conventions has never been in the dealer's rooms or on the panels, but rather scattered across the gaming tables.

There are a lot of nice, meaty ideas within the book, but here's one that had not seriously considered before now. D&D and other RPGs really contain two separate games - one for players, one for GMs The more I look at that, the more I nod my head in agreement. When I am playing an RPG I am in a different head-space than when I am running it, and my metagame/downtime as a DM/Judge/Keeper is much deeper when I am running a game than when I am playing in someone else's world.

This is a book that is worth hunting down, picking up, and reading. It is densely packed with a lot of info from the time. Go read it.

* The term shows up as a single, lower-cased word, "dungeonmaster" in Gary Gygax's introduction to the Blackmoor supplement, to describe Dave Arneson, and as "Dungeon Master" as a proper noun in Tim Kask's intro to Eldritch Wizardry.

We fought a group of Ogre Magi.

The lair had a welcome mat in it.

My god, what a cheap referee!

The lair had a welcome mat in it!