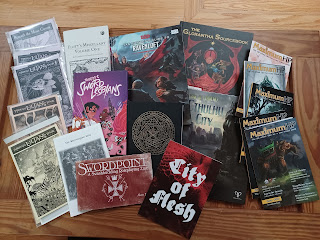 Now, I have not read most of there beyond leafing through them, and I usually only review game material that I have played (reviewing a game product from its text is a little like reviewing a movie solely from its script - it's nice but doesn't really talk about the final product). So these are some first impressions:

Through Ultan's Door (Ben Laurence) This is a beautifully produced 'zine along the ideas of what a 'zine should be. Issue 1 has a separate cover with a dungeon map on the inside, along with a heavy paper encounter sheet and 32 page saddle-stitched self-cover book. Beautiful, detailed art for the map and inside by Huargo and others. It is a single dungeon within floating city in the Dreamland. I have three issues, the last one being split into two booklets. Good stuff.

Flott's Miscellany Volume One (Andrew Devenney and others, Superhero Necromancer) 48 pages, saddle-stitched cover. This is an expansion of the A Visitor's Guide to the Rainy City. The Visitor's Guide was a pretty cool overview of a sinking city that could be plunked into a deserted stretch of water in your campaign, and could make a good Ravenloft domain as well. This Miscellany has a lot of stuff to add to it. Arrived a little damaged, but it is the content that counts.

Thirsty Sword Lesbians (April Kit Walsh, Evil Hat and Gay Spaceship)  A high quality 222-page hardbound, full color, High graphics. This is "Powered By the Apocalypse Engine" project, and is my first time looking at that particular game engine. What I find noticeable on the first blush is the lack of stress on combat (no big tables with every butterknife and bohemian ear spoon available), and with it lack of detailed combat mechanics. Yet I can see running a Julie d'Aubigny-style campaign with it.

The Merovingian Hack (Justin Bengston) is a much more utilitarian 'zine - 32 pages self-cover on ordinary paper stock. Uses a simplified roleplaying system known as a "hack" - there are Cthulhu hacks, Cyberhacks, and even a Empire of the Petal Throne Hack. This one is for playing in 8th century France. Pretty basic stuff, but could be a foundation of a campaign

Swordpoint (Alan Bahr, Gallant Knight Games) 65 pages, saddle-stitched, cover. "A Swashbuckling Roleplaying Zine".  Interesting landscape (length-wise) presentation as opposed to portrait (tall, in the manner of regular books). Even though it carries an OGL statement, it seems far removed from D&D, which as a system has always been challenged in capturing the style of cinematic swordplay which embodies this particular subgenre.

Van Richten's Guide to Ravenloft (F. Wesley Schneider, Product Lead, and a host of writers, developers and editors, Wizards of the Coast). 256 pages, hardbound. A descendant of the Domains of Dread, in that it talks about a LOT of the demiplanes of Ravenloft, as well as tuning your horror-based D&D campaign to the style you prefer. Lots of lore in bite-sized bits. There's even a mention of Markovia, from Neither Man Nor Beast, and that's cool.

The Dee Sanction (Paul Baldowski). 68 pages, hardbound. Black cover with a big golden magical emblem. The elevator pitch is Queen Elizabeth's Occultic Suicide Squad. Sorcery is outlawed. You have been caught using sorcery. Your life is spared as long as you work for court magician John Dee to fight occult threats to England. Very nice presentation, but an overuse of boldface to indicate game terms.

Glorantha Sourcebook (Greg Stafford and Jeff Richard, Chaosium Inc.), 220 pages, hardbound. I have always had a soft spot for Glorantha, ever since playing the original White Bear and Red Moon. But its lore has always been a heavy lift, since there it is deep, involved, and often counters itself in telling the tales.This book from 2018 is making a great stab as separating it all out in a relatively linear fashion (for a cosmology where a lot of stuff happens, and THEN time begins). I'm reading this one in the evenings because, of course, I have a soft spot for Glorantha.

City of Cthulhu (Gareth Ryder-Hanrahan, Pelegrane Press), 220 pages, hardbound.Trail of Cthulhu is a variant/descendant/alternative to Call of Cthulhu, the core rules addressing some challenges in the original (like the very real chance of players not getting a vital piece of info because of a bad die roll). Trail's support material can be used as a supplement for standard material, and tends to hew towards the more existential dread end of the spectrum as opposed to the pulp world-shattering menaces. In this case, we have a city book for Greater Arkham, which has made its deal with dark forces and swollen in size, like a cancerous corruption. May be a good setting for the players should the stars suddenly prove right.

City of Flesh (Elizabeth Chaipraditkul and Steffie de Vaan) 52 pages, squarebound. "A tarot-based femmecore roleplay zine set in the rotting womb of a dying colossus". That's the back cover copy.  It is one of those art project, graphically intense, oddly-laid out efforts, like Ennie-winners Mork Borg or Mothership. Probably will require a bit more attention than your standard quick read.

Maximum HP (Loyd Metcalf and others, 48+ pages) Five issues, variable length, saddle-stitched or squarebound. This D&D 'zine almost slips into quasi-magazine state, in that it has ads in the back for various gaming stores and services. It looks and feels like a pieces from a local campaign, and is nicely put together. Every issue has a theme, the first one being Dwarves, with a lot of interesting bits, including the use of dwarven elephants (woollyphonts). I will admit that I did not see that coming.

Grey Seas are Dreaming of My Death (Derek Sotak and others). 108 pages digest, squarebound. This one missed picture day (because I forgot to include it). This is a William Hope Hodges RPG. William Hope Hodges is one of those "lost horror writers" from the Pre-Lovecraftian era, best remembered for The House of the Borderland.  He also did a lot of nautical horror, much of it set in the Sargasso Sea (which abuts the Bermuda Triangle as a spooky chunk of naval property), and this book sets up to partake in the horrors. Really want to play this one.

That's it for the moment. I have a bit of reading material