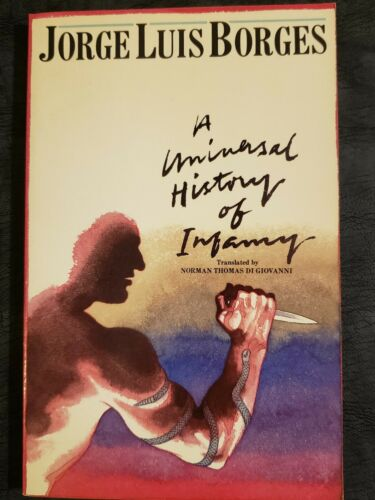 Provenance: From Sacnoth's library by odd happenstance. The company that helped put together miku, and the gods, is putting together another show called She Devil of the China Seas, about the Pirate Ching Shi*. I had brushed up against this legendary figure a number times in my life - including as model for an unpublished character for Crucible.. I mentioned it to Sacnoth at one of new post-Covid gatherings, and he plucked this book off the shelf, which contains a short essay by the renowned Argentinian writer Jorge Luis Borges on the subject.

Review: Jorge Luis Borges is sort of that distant relative to most fantasy  gameplayers thkat they have heard of, maybe see at weddings, but never really had a good talk with. People may have read "The Library of Babel" or "The Book of Imaginary Beings". but Borges was not one to follow the traditional fantasy quest traditions, so gets overlooked by our rank and file. He is a founder of the school of Magical Realism, which is thought to be installing fantasy elements into traditional settings and writing, but has revolved over the years into a genre that means Elves as London Coppers.

The book is a collection of essays and short works that break down into three categories. First there are fictionalized biographies of particular villains of the past - Bill the Kid, Monk Eastman of the Gangs of New York, and the aforementioned Widow Ching. As a hinge in the presentation there's a short story written in first person about young urban punks, and then finishes up with a collection of "Etcetera" - short parables, for lack of a better word. The biographies are more eloquent, less factual, Wikipedia entries, and the Etcetera are short enough to merit a multi-entry Twitter chain. Indeed, if Borges' medium was the net and not the printed form, these would have been lost to the ever-widening electronic gyre of Facebook. It was good he was writing when he did.

These essays are from early in Borges career, yet immediately set himself out as a master teller of tales, his work based philosophically in their underlying morals. They can be a great underlying foundation for a campaign setting or adventure, but lack the deep exposition, quest-like plotting native to our sub genre. What they do have is a lyricism and magic that sweeps the reader along to a brief resolution. The are as eloquent as they are brief. Magical realism, indeed.

The originals are in Spanish, and the English translations (in Borges own opinion) are excellent. Still, in reading foreign translations, it feels like attending a play and standing in the lobby, while a stream of people come out and tell you what's on the stage. Yet even in translation it is worth it to hunt this down and read it, if nothing else as to indicate philosophical underpinnings to potential settings. And because it is a darned engaging set of reads. So need to go down to my library and pick up the Borges Collected Fictions that I have had on the shelf for a while.

*An incredibly famous female pirate you've never heard of, Ching Shi (also known as Zheng Yi Sao, Shi Yang, and Shi Xianggu, all of which translate as "Wife of Ching" or "Widow of Ching") inherited her pirates from he husband, and built the family business up to an armada that terrorized the mainland. The fact that we name her in the shadow of her less-successful husband is telling.