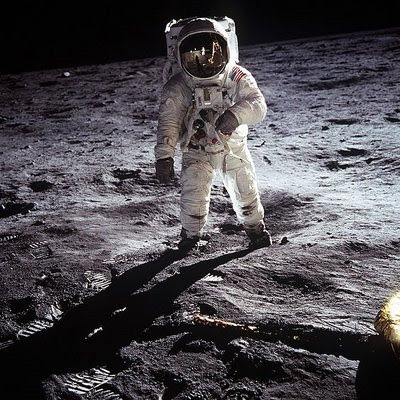 Forty years ago I am sitting on a plastic chair in the basement common room of a college dorm somewhere in the American Midwest, watching the TV with the families of teachers who are attending summer school. The TV is an ancient black and white, and the only one available in the building, mounted high in the corner, its screen about the size of my current flatscreen. The picture is awash with broadcast snow, and the image itself is a blurr of black and white - a man in white moving down a ladder, pausing, then stepping away from the lunar lander.

A picture from another world.

It has been forty years, and its anniversary has been greeted with a mix of nostalgic sadness and frustrated ambition. We have returned several times, but it has been a long time since anyone has walked on the moon, and neither the potential for new knowledge nor the celebration of such a stunt is sufficient to motivate us in cash-strapped times (and times will always be cash-strapped when it comes to such things as pure exploration). The original lunar programs were a patriotic crusade, decked out in bunting and tickertape (two other things, along with B/W TVs, which are now part of a Bradburian past). Now we turn to other matters.

On one hand, there should be frustration regarding that we have not done more - forty years after Columbus, the Spanish were already kicked around the Incas (Hmmmm hang on. Let me come up with a better example). Yet we have moved forward, in communications and low orbit technology. Our modern world is shaped by Google Earth, GPS, the Internet, and satellites, not to mention computrs, teflon and tang. Even our slow advance in space travel itself, with the shuttle and International Space Station, is a mark of comfort compared to the lash-up spam in a can that we flung heavenward over forty years ago.

Yes, I think we will be back. It may be draped with flags and national pride, or powered by pragmatic managers looking for new resources. It is only a matter of time. But still ... forty years. Sigh.