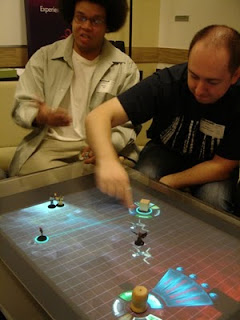 One more dip into nostalgia, but I promise to return to the present and show a cool future before we get out of this.

I started playing D&D in 1975 at college, and brought the game back with me at Thanksgiving break to my friends in Pittsburgh. By 1976 we had a number of campaigns set up, including a weekly one at Carnegie Mellon University (CMU) - Wean Hall, in one of corner conference rooms overlooking Panther Hollow. We used that meeting room so often that one of my housemates and I...um... borrowed one of the folding tables from that room. And by the time we got around to returning it, well, that room was no longer a meeting room and CMU didn't use that type of table anymore.

In any event when I got an invite to see the Microsoft Surface D&D table, I had to accept. The demo was created by the SurfaceScapes team, a group of students from CMU using Microsoft Surface technology to play the game. Thirty-five years ago, the big projects from the CMU CS departments were things like the driverless van and the hopping robot, so this is a pretty cool thing.

The Surface device itself is about the size of a small coffee table, with a projector beneath and four IR cameras on the corners. The projector displays the map (any size - it scrolls). Items on the board (like your miniatures) have IR tags beneath them, so the program can track their movements. You can hook the table up to the DM's computer, where a program can control the monsters, maps, and other sundry. 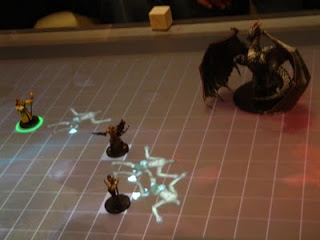 Where the challenge lies in this sort of thing is the surface itself, the interface between the programs and the users. What the CMU team has done (incredibly well) is identify how much and what types of information the players want on the table. Your miniatures are on the table, the monsters can be either part of the display, or can be miniatures as well (at the close of the demo, the DM dropped a dragon on the table to fight. As he put the dragon down, dust kicked up from the table and there was a deep audio thump of it landing - very nice use of interface).

Now I remain deeply aware of D&D and its minutia, but I am very trailing edge as far as tech is concerned (my phone, for example, is only used to make phone calls - it's so retro). But I quickly got the hang of how to use the screen, and was incredibly impressed by the amount of raw D&D material they made available. That's another challenge of D&D - you may not need to know you AC all the time, but when you need to know, you need to access it instantly. How they made the information available was pretty darn elegant.

According to the CMU team, the Surface was originally created with an eye towards board games, but that did not pan out, and the CMU team was looking at more real world applications, when they showed it to the Penny Arcade guys (yeah, the comic strip guys). Penny Arcade walked through the original demo, and said, "you could play D&D on this thing". And so the wheel turned back. Plus the fact that 4E is the most computer-friendly version of the game yet, while there is programming for every new spell and ability, it is easier than in the eldest of days.

Here's the thing - this is a student project. It is unfunded (and they could use a few of the newer D&D books (hint hint)). The device itself is more commercial than home use (Surfaces are in use for information kiosks and the like). A D&D table would likely work better in game stores than in the home. It is a demo, so there are pieces that are still work in process (Version 2.0 is going to be ready for GDC and PaxEast, in case anyone is interested in seeing it live).

The big question I thought of was: In the home, what piece of furniture would this replace? The device we played on was about the size of a coffee table, so I could see it in the middle of the living room, surrounded by low chairs. A larger version would replace, say, a pool table (oh, you don't have a pool table? Me neither, but that's part of the problem), and would be priced accordingly.

The "Ultimate Gaming Table" has been a Holy Grail for DM's since the publication of the first D&D box. This project has done an incredible job bringing that day forward.And it is a great improvement over a folding table liberated from Wean Hall.

Oh, and that original gaming table we ...um .. borrowed from CMU? It's still in my basement. You guys can come and get it anytime.

Update:Monkey King was with me, and has a great writeup of the device and the app as well.
Posted by Jeff_Grubb at 10:44 AM