Midnight in the Garden of Good and Evil - John Berendt, Random House Publishing, 1994. 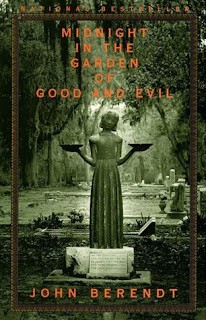 Provenance: This is one of the older volumes on my "Shelf of Abandoned Books". I picked it up in the nineties, and it has been sitting there, waiting for me to get back to it, for over twenty years. The book has a good rep - finalist for a Pulitzer Prize, long-term status on the NYTime's best-seller list. And it is a physically odd book physically, tall and narrow, more like a door than a text. Maybe that is why it stayed on the shelf when other Abandoned Books were started, ignored, and quietly sent away.

Review: The book is (much to my surprise once I engaged fully with it) a true-crime story of a murder in Savannah, Georgia in the early 80s. The author tells you that there will be a crime at the beginning, but he takes a meandering route to the murder itself, and then feels distanced from it afterward. Really the book is about Savannah itself, or at least the more elite chunks of it.

The author arrives in Savannah as a result of airline deregulation, which makes it cheap to set up a second apartment outside of New York City. He is enchanted by the heart of the Savannah, in particular the antebellum historical district, where the original streets were laid out around park-like squares. He settles in and starts meeting the locals, who are as quirky as anything that would come out of Lake Wobegon. In fact, it does feel like we're dealing with a Southern fantasy version of that Minnesota town that time forgot and the decades cannot improve  - where all the women are strong, all the men are good-looking, and there is a murder just hanging on the horizon. In fact, every time the characters seem to get up a good head of steam, we're reminded that a murder is about to occur and that this is what the book is supposed to be about.

The unamed narrator (though the tale is first-person, so he'd be John) takes a glancing blow across Savannah Society. We meet Jim Williams ,the eloquent antique dealer with his hot-headed poor white trash assistant/lover. We meet the African-American drag queen The Lady Chablis. We meet Joe Odom, the questionable lawyer who squats in fine houses that are not his own and turns them into 24 hour party venues. There are others - the man with non-existent dog, the pianist who criss-crosses Georgia to play any song for anyone, the fellow with enough poison to kill all of Savannah, but Williams, Odom, and Chablis are carry most of the plot, though they rarely encounter each other. The author encounters folk in cafes and drives people around a lot, such that at one point I wondered if he were the only one with a car in 1980s Savannah.

The murder itself takes place at the midpoint of the book, and I shan't spoil a twenty year old text on a true-life event by telling you who was involved (that would be what Wikipedia was all about). But the murder passes through with just the same level of attention as one of Williams' parties or a bar-crawl involving glowing fish. Having occurred, the murder (and the resultant trial) is just one more thing in the Savannah social life. It takes more than a dead body to overturn that.

After the fact, the accused seems to engage in magical thinking on two levels. One is a faith that system will not convict a highly respected member of its own community. The other is a reliance on the old magic, and a literal conjurer name Minerva who uses the garden of the title to put the hex on folk. And both approaches work and neither work and we are left with double-handful of stories and not a lot tying them together.

Our narrator is practically passive throughout - he is transportation and confessor. He drives and he listens. The exception to this passivity is late in the book when The Lady Chablis crashes a black debutante ball he is covering, and he tries to extricate himself before the inevitable meltdown, showing some true emotion and engagement with his surroundings. But that's the exception that tests the rule - he is otherwise incredibly neutral, non-judgmental, and empty throughout. Savannah is the show and he is just the announcer.

So did it age well? Pretty well. It reminded of parts of Reagan's America, and perhaps what is scandalous about it is how much of it isn't scandalous at all in those days, or at least is politely ignored. The tale is all strained through a venue that is as much of a hot-house environment as anything Tennessee Williams ever envisioned. This is a closed eco-system, kept afloat by its own form of magical thinking.

And while there are more than enough working-class types drifting through this environment, they seem to be swept up in the magic of the Squares of Savannah as well, in a weird little ecology of social gatherings and parties at all levels. I suppose that's what holds it all together, ultimately - the parties, whether it is The Lady Chablis performing in drag, Odom's continual bacchanalia, or William's legendary Christmas party (and his OTHER legendary party). It about the social engagements.

Maybe that's what makes the book worth reading after all these years.