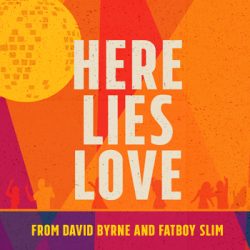 So let me right off the bat salute the Rep for the ballisest production of recent years. I have in the past tweaked them for relatively safe performances that fit within the bounds of traditional theatre. Small companies of actors, one-person shows, self-contained productions that fly in and out without seemingly touching the ground upon which the stage rests.

Yeah. All of that goes out the window for Here Lies Love, in which the theater itself, seats and all, is transformed into a disco, where the audience can be on the disco floor among moveable stages, where the actors come down and press the flesh with the masses in front of live TV cameras, where there is a continual disco backbeat and an excellent cast powers through a tight ninety minutes that tells the tale of Imelda Marcos. This is one of those performances that poses and tremendous risk for the theater, and it pays off creatively (and should pay off financially, because - spoilers - you really should go see it).

The theater space is tranformed into a massive disco cathedral. The seats on the main floor are gone, and what once the right and left banks of seats are replaced with huge stacked levels for those who chose sitting over standing. Most of us are on the floor, which it tighter and brighter and noisier. The disco beat plays, and yes, there is a DJ. The action takes place on moving platforms that slide and rotate during the performance. Unsung heroes (in the fact that they don't sing) are the jump-suited attendants with glowing sticks (called aircraft marshalling wands, I have just discovered) that keep the groundlings from being crushed by the action.

Here's the not-quick summary: Imelda is poor, romances and is rejected by Ninoy Aquino, rising young senator. She goes to the big city, has a whirlwind romance with Marcos (who in the real world is 40 years her senior, but here is just a bit older), marries him. She is Jackie to Marcos' JFK, and tries to do good, but is swept up in the heady drug-fueled seventies and betrayed by her cheating husband. She returns to pick up the gauntlet when Marcos gets ill (lupus) and effectively runs the country with an iron hand, claiming to know what's best. Her old boyfriend Ninoy returns in her life as a leader of the opposition - she has him imprisoned, exiled and is assassinated upon his reveiw, but his shooting kicks off the revolution that causes her to flee the country.

It is a potted history of the Phillipines, shrunk to 90 minutes and shown through Imelda's eyes. She is is betrayed time upon time, and feels that the wounds she has suffered justifies her actions. Her costume over time becomes more armored and military as she becomes the Steel Butterfly. Even at the end, she feels betrayed by the people she felt she served in the name of love.

That sense of betrayal spreads to the audience as well, as the the rousing back-beat and line-dancing becomes a demand to party as the military rolls in, the cities burn, and martial law descends. The feel-good optimism of the early play becomes dark as the audience is forced to uncomfortably condone the heroine. There's a moment when it dawns on each individual (a different moment for each audience member) that this is going down the wrong path, and their encouragement is demanded.

All that said, it is a powerful performance. All the singers are fantastic and the ensemble is frenetic as they change supporting roles at an instant. Jaygee Macapugay is a beautiful, fragile, convincing Imedla. Mark Bautista is Marcos with a seducer's smile. Byrne's style of lyrics comes out fully with Conrad Ricamora, as the white-suited (no subtlety here) Aquino. Melogy Butiu is Estrella, the childhood friend left behind and the reminder of the world Imelda no longer is part of. They are fantastic, throwing everything they have into the performance.

The musical ends (spoilers) with Imelda fleeing the People Power Revolution, but in the real world, its not that easy. Marcos is dead, but Imelda has returned to the Philipines and is a senator for her home district. Two of her four children (shown in pictures but not referenced in the performance) are heavy hitters in politics, and the family fortune, built up from all the corruption, is involved in the recent Panama Papers scandal. Yet that is not the happiest of endings for the people of the Philipines, and the play ends with the positive sense of finality of the revolution and a reprise of its main song.

This is spectacle. This is an event. This is one of those plays that long-term theater goers and those who avoid such traditional forms of entertainment should see. Well worth it.

A final review of this season: Here Lies Love wraps up the Seattle Rep's season (which is just as well, because they have to put all the seats back, now). And the season has felt like a time machine this years. We started in the late 50s with Raisin in the Sun, jumped to the AIDs crisis in the 80s with Roz and Ray, jumped a few years more years to the Post-Queen Elizabeth era of King Charles III, back to the 70s with Vietgone, rolled through the Great Depression with Woody Sez, jumped into a weird interior mindspace of the 60s with Well, went contemporary with Dry Powder (the only one I really didn't care for) and then wrapped up with the 60s-80s in the Phillipines. This was a very political, wide-ranging season, and the Rep did a damned fine job. Theater as Tardis. Looking forward to what happens next year.