Book: Welcome Back My Friends 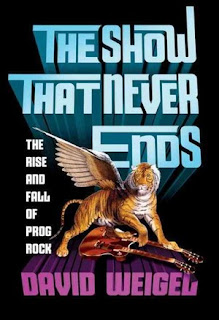 Provenance: I discovered this book through a review. In particular, THIS review, which was not so much about the book as about its subject matter and why that subject matter wasn't worth much in the first place. As a review of a review, I'd say it's not much of a review, but it was on a subject that was a part of my college years: Progressive Rock.

Review: I got into Prog Rock in the late 70s (don't judge) after my John Denver phase (I SAID don't judge). ELP and Yes and Peter Gabriel-era Genesis. Progressive Rock was loonnnng songs with involved, often opaque lyrics that disdained the prepackaged, 4/4, lovesong nature of radio pop. Emphasis on musical techniques, centered on the keyboards as opposed to the guitars, strong influence of classical music, leading edge on tech, displays of arcane knowledge, long percussion solos, bizarre time signatures, and a lot of noodly bits. A lot of these properties, interestingly enough, Prog Rock shared with Dungeons & Dragons, and there was great amounts of overlap in both the performers and the audience.

Weigel intros his book with a nostalgia cruise for Prog Boomers, identifying them as a quirky bunch of anoraks, like model train enthusiasts, but quickly comes to grips with where progressive came from, both from a tech end (the rise of the Moogs and other electronic devices) and the rebellion against the extant commercial pop world, supporting performance over packaging. He follows King Crimson and other early pioneers through the great domain and dominance of the progressive groups as they formed, splintered, and reformed again. He gets into odd trivia (Lemmy of Motorhead was a member of the Moorcock-inspired Hawkwind? I did not know that) and tries to show the forces working to create Progressive Rock - touring, the rise of arena shows, record labels willing to take risks and develop talent, new tech, and the music media. He tries to describe various pieces in detail, which works if you know the songs in question, but otherwise sends me to YouTube for reminders. (writing about music is akin to dancing about politics - a completely different mindset between the words).

Weigel covers the halcyon days of prog with an eye towards personalities and personal development and new ways of putting together music. Then, with the suddenness that it appeared, prog was declared a dinosaur - too expensive, too baroque, too engaged. Punk and Disco (yes, Disco) arose in response to the over-technical banks of keyboards. What was rebellion was itself rebelled against. The rock media turned, the labels looked elsewhere for cheaper acts and quicker turnarounds, and the prog groups faded or transformed, mammal like, into something that could survive the new era.

I liked to book. Weigel's style moves quickly, bouncing from a high-level overview to personal anecdotes and back again. He reminds me of early groups that I had not thought of (like Van der Graaf Generator) and later incarnations I should check out ( Porcupine Tree, Majesty). And a lot of a music of the era that I really liked (though truth to be told  I always found ELP's "Lucky Man" to be a bit twee). So yes, part of this is nostalgia and part is pure rediscovery. If you lived through the era, you should check it out.