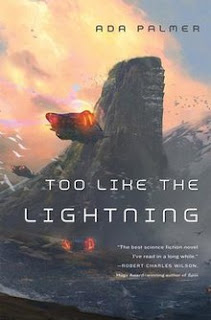 Provenance: Purchased at the Elliot Bay Bookstore back in January. The Elliot Bay Bookstore is no longer near Elliot Bay, and as such is no longer a destination bookstore (lacking free parking in its new, Cap Hill location). But if I am up there for other reasons, I will drop in, as it is well-appointed and has a great variety of recent books. I had heard good things about the author (who won the John W Campbell award for the Best New Writer, sort of Rookie of the Year for the science fiction), and specifically went after it. The first two volumes were there in trade, so I picked both up, and was pleased, since they are effectively one story, and that reviewing one without the other would be akin to only reviewing Fellowship of the Ring, or treating Avengers: Infinity War as a complete story, ignoring that the resolution of that film is a year away at this writing.

Oh yeah, there will be spoilers. I'll try to make the intermittent and relevant, but they will be there nonetheless, in part because the cover matter does not play entirely fair with the reader..

The Review: Both volumes are very upfront on the cover, with a review from NPR comparing the books with the works of Gene Wolfe and Neal Stephenson. And that should send some flares up for the more timid reader, in that Neal Stephenson's works are lyrical and rambling and cover a huge amount of ground, and Gene Wolfe's works show but rarely tell, at least tell clearly, leaving the reader the reader to fend for themselves as to meaning.

Me, I will compare the two volumes to Dune, by Frank Herbert, in which is has a massive amount of politics weaved through an adventure story, with factions piled one upon another in alliances and secrets and betrayals.

Let me start with the world. It is 450 years in our future, in a post-scarcity world that has survived regionalism by breaking up into seven large borderless Hives. These Hives span the globe, each having their own views, methodologies, and agendas. The Mitsubishi, dominant ins Asia but extending everywhere, is very corporate and land-based, while the celebrity-driven meritocracy of the Humanists have the greatest population. The Cousins deal with charity and provide non-religious spiritual advisors, The Masons (yes, those Masons) resurrect the trappings of Rome, Europe has grown to a global EU with member nations, the Gordions are cyber-behavioral scientists, and the Utopians wear image-projecting cloaks and are working to terraform Mars.These Hives have worked together in uneasy alliances, keeping the peace on Earth since the Church Wars of 400 years back.

Our guide to this carefully-crafted equilibrium is Mycroft Canner, who at the outset declares himself a horrible and unworthy individual. He's right, ultimately. He is also our old friend from classic SF, the absolutely necessary man. Louis Wu. Hari Seldon. The smartest (relative) guy in the room, who knows (or finds out) what is really going on. Mycroft committed a horrible set of crimes by even 20th Century standards (you find out the nature of which towards the end of TLTL and his reasons towards the beginning of TSS), and for these crimes has been made a Servicer, a member of the underclass who pay penance for their sins by performing tasks for others without pay - usually of the mucking out the sewers department. But in addition to mucking, Mycroft is also regularly recruited by the powerful forces of the Hives since he is too brilliant and necessary to be just shoved into some corner and forgotten.

This includes working with a rather curious bash'. A bash' is an artificial family with a common interest, can be hereditary or not. This particular 'bash, the Saneer-Weekbooths, are in charge of the global transportation network - every air-car on the planet, put into the hands of this one small group of individuals.. Their small numbers include Mentats who juggle transportation computations with ease, the most popular media star on the planet, a mad scientist, and a witch. Oh, and there's a small boy living in the garden trench with the ability to bring toy soldiers to live and manifest anything he thinks of, including raising the dead. The members of the bash' are keeping the unearthly child a secret from the hives for the moment.

From the body copy you get the boy (mutant? divine? alien?) is the thrust of the books, but actually the child disappears for long patches of the week that the action of the two volumes cover. Instead, or rather in addition, we get a scandal involving the ranking of the most powerful people on the planet, the theft of the "Canner device" (with which Mycroft supposedly committed his crimes), various rebellious sub-factions within the Hives, and two (at least) major conspiracies. One involves gathering the most powerful members of the Hives at a brothel in Paris, and the other involves that quirky 'bash in charge of the air-cars, which has another, more deadly charge with keeping World Peace.

Yeah, its a lot. Now let add two more things that are deeply wound into the fabric of this future world. First off is a deep engagement with philosophers, in particular those of the Enlightenment - the works of Voltaire are here, and Diderot, and DeSade. Philosophy is not my strong suit (I believe I hold a singleton trey in it), but Palmer makes it all pretty much digestible, and one can follow along nicely whether one agrees with it or not. The other is the the conceit that, after these religious wars that ended the nation-states, the world moved to a genderless future, where identify gender at all is considered a social faux pas (at the least).

And Palmer pulls this off neatly as well, being the first text I've hit where "Singular They" actually works with a minimum of confusion (Not to say that it in universal - I had to back up and take another run at some sentences to figure out whom they were talking about). Also, our narrator Mycroft eschews this (often to the disgust of an imagined future reader), but he in turn spins it on its head by tying gender to presented roles and appearance as opposed to the contents of one's underwear. As a result gender is more fluid, and one character changes apparent gender over the course of the books. Palmer not only pulls this off, but makes this question of gender one of the central drivers of action in the books (That brothel in Paris that the high-mucketies are meeting at? Among the sins available to customers are the chances to act like old-fashioned Lords and Ladies of pre-revolutionary France).

This is extremely dense and engaging book, and in reading it, you're often flipping back to check out who this character and what their faction represents (bookmark the list of "most important people" in volume 1, as this will get a lot of work). Worse yet, the same character may be referred to by different names by different factions, such that one most-venerated character goes by a half-dozen different names.

Oh yeah, one more thing. The author apparently hated typesetters, since this global book is replete with all manner of accents, umlauts, italics, brackets, and  non-english pronunciation marks. It captures its globalisms in that conversations move from one format to another effortlessly, while still declaring the world has individuals, factions, and subfactions. 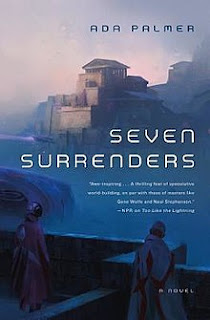 This is two volumes out of four, but it tells one story - of a seven-day span when everything in this peaceful world suddenly goes to hell through revelations of long-kept secrets. The boy in the trench, the Parisian brothel, the most important people list, the origin of this most-venerated individual, various conspiracies, and plots aplenty. By the end of the first book, Mycroft's identity is exposed to the world, the Saneer-Weeksbooth's confessor has entered the Parisian brothel, and the secret of the S-W's has been uncovered. By the end of the second, the boy in the trench is apparently resolved, the word spreads on various uncovered conspiracies, characters you have come to like turn of each other, and there is at least one heel-turn that has a strong whiff of "where the heck did THAT come from".

A point I will take issue of within all this wonderful world-building is the role of the vast bulk of the population. I know that they have 20-hour work weeks and that people who really love what they're doing ('Vokers, for it being their advocation) are tolerated with only a slight social stigma. But we cruise almost entirely among the elites or this particular bash' of 'Vokers, so we don't see much of the 99%. For the most part the general population is reduced to the Parisian or Roman Mob - docile until whipped up into righteous fury. But that feels like picking nits against this larger tapestry.

One last point. With this work, Ms Palmer definitely rates the John W Campbell award, but this was given in the teeth of the Sad/Rabid Puppies huggamugga in the Hugos. The short form of the conflict is that a group of mostly conservative, Caucasian, male writers took umbrage at all these people who were not conservation, Caucasian, and male kept getting Hugos (more detailed versions here if you really care). What is weird is that a lot of what Palmer is saying in these books dovetails pretty neatly into conservative thought - ideas like Man is as a create effectively violent and the best you can do is protect yourself, that large organizations, regardless of methodology or ideology, are vulnerable to corruption, that struggle is necessary part of the human condition, and that merely denying gender differences does not remove them. These would fit snugly into the SF of yesteryear (In addition to the "necessary man" I mentioned earlier), yet I have seen no one identify and embrace those facets and putting this book into that particular area. Perhaps it is that the ball is still in play, and there is no ultimate resolution as yet.

It will come in time, I suppose, in much the same way as the first three Dune books have spawned their own literary criticism and analysis. This text is an uphill fight(oh yeah, lot of sex here, in case you're timid in that department), but a very rewarding and engaging one. I think, however, I will wait for the final book to come out before finishing the entire series.